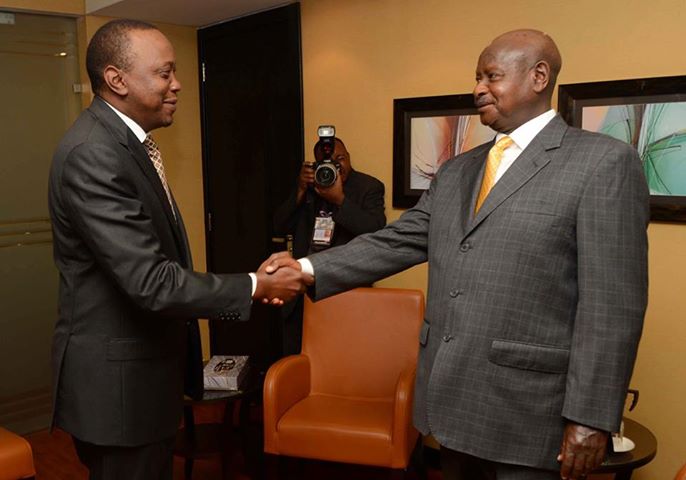 President Kenyatta could not hold into himself a rare encounter he had with the Father of The Free- Prime Minister Raila Odinga, he had to announce it, his heart could not hold it any longer, and he could not believe it!

He better risk embarrassment but tell! It is alleged that the Kampala meeting (reported by the Nation Newspaper) was a “just by the way” organised at the request of Uganda President Yoweri Museveni, apparently Uhuru’s friend (Museveni) just like retired president Mzee Moi is NOT happy with the way Uhuru Kenyatta’s administration has demonstrated extreme disrespect to Raila Odinga.

The Kimemia circulars that barred Odinga from using the VIP Lounges at Kenya’s airports have dented Uhuru’s image among his peers and also his ardent supporters- Presidents Museveni and Moi, it is said that Kibaki is little bothered and is clueless as to what is happening.

President Museveni held a meeting with President Uhuru, itâ€™s at this meeting that Museveni sought to know what exactly was happening in Kenya, specifically media reports of Raila queuing at the airport’s general public entrance for clearance before boarding. Museveni was shocked that the man whose name whenever mentioned reminds him of his pan African ambition was treated like a junior government employee!

It is an open secret that Museveni was against a Raila presidency given Raila’s chance of outshining him in the continent. Museveni is a presumed Railaphobic BUT he is alleged to have “lectured” our president-Uhuru the basics of respecting elders.

Museveni- who is said to have been incensed with what he called nonsense and childishness, asked Uhuru why Raila could not be allowed to use VIP lounge, retain government vehicles and enjoy police security like Kibaki and Moi; Uhuru most likely had no answer other than the usual parroted by his disgraced spokesman Muthui Kariuki, itâ€™s at this point that Museveni gave an “order” that Raila should be allowed to keep the cars, maximum police protection to all his homes and properties and an all access to VIP sections of the airport!

The report of the Kampala dress down of Uhuru did not go down well with some kitchen boys in statehouse; to implement the Museveni “order” they had to gain political capital out of it, its at this point that it was agreed to invite Raila to state house for discussions to discuss the “state of the nation”.

At statehouse Raila was to be “sweet talked” into toning down his anti jubilee stance, then Uhuru could release a statement announcing that Raila’s security, cars and an all access to VIP lounges had been restored upon review of protocol.

The announcement of Raila’s access to full “Sandaki (Plastic) mkeka was to be followed by propaganda via new media of how Raila is obsessed with big toys read things; cars, watchmen-security, sirens, VIP Toilet et el and that he had forsaken the spirit of being the official opposition among other usual Jubilee stereotyping propaganda.

Raila’s intelligence source passed this mini plan to him, its at that point that he called a bluff and so Uhuru had no choice BUT to announce to the world the Kampala meeting to contain any leak of the alleged Kampala dress-down. Through his press secretary, Emanuel Esipisu the president confirmed that the Kampala meeting took place;

He further described the presence of Mr Kenyatta, former President Mwai Kibaki and Mr Odinga in the Ugandan capital at the same time as â€œcoincidentalâ€.

Uhuru’s administration that has served for only four months is struggling to set a firm foundation, emergence of crisis after crisis have reduced the administration to more of ring fencing issues than a lip forward. The continued mistreatment of Raila is a distraction the broke government needs to buy time as they stare at empty public coffers due to pullout by donors.

Itâ€™s a consequence Kenyans got to live with having been gullible to Uhuru’s propaganda machine. During Uhuru’s inauguration Museveni openly refereed to him as a son/cousin of Ugandans re-affirming Kenyatta family’s alleged ties to the Uganda royalty- a story for another day! Perhaps the said family links could be the reason why Museveni feels some entitlement in lecturing our president.

Museveni’s lecture is an irony considering his continued mistreatment of Uganda opposition leader K Bisigye, though the opposition leader has never occupied senior position in government he surely needs respect, perhaps Museveni might have seen the light and Bisigye’s fortunes may soon change.