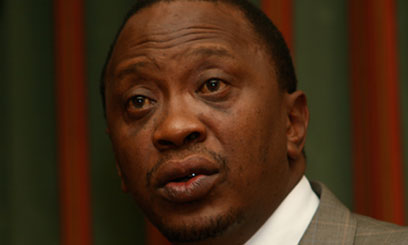 Kibakiâ€™s preferred successor Uhuru Kenyatta was recently sarcastically described by Makau Mutua as a man who has come of age.

He continued to poke holes into Uhuruâ€™s claim of youth, because he is old now unlike 2002. At 51, Mutua claims the dude cannot claim the mantra of youth, never- he is now officially an old man who has evolved into Kenyaâ€™s most polarizing figure, highly unlikely to unify the nation.

However, for the many intellectually challenged TNA enthusiasts on Facebook, the article appeared like an endorsement of UK as a Muthamaki who has literally come of age and was shared widely- to them it was ok for a leader to be described as the Muthamaki , they truly believed he embodied.

The celebration was not long before TNA Propagandist and phony intellectual Jasper Mbiuki who happens to be an intellectual dwarf compared to the SUNY Distinguished Professor and Dean at the University Of New York Buffalo Law School, was soon to discover- after a week of reading it over and over- the sarcasm of the article which was well embedded into the article, after which he issued a poorly researched and unconvincing rebuttal.

Of contention was that UK, as he is popularly known has been lording over the Central Kenya leaders as though they had become his subjects- â€œlike a Muthamakiâ€.

As the son of the first President who ruled with an iron fist Â is described by Makau Mutua as â€œâ€œKamwana Princeâ€ of the Mt. Kenya regionâ€- a euphemism that confirms that he is in the eyes of many including the Diaspora where Makau lives- a â€œPrinceâ€ that only controls the 1997 DP stronghold.

Recently there have been defections of mainly Central Kenya leaders like Rachel Sahebesh, Kabando wa Kabando, Maina Kamanda and a few Â from other parts of the country keen on exploiting Kenyattaâ€™s bad inheritance fortune.

The other defectors from other parts of Kenya are the desperate ones like Jebii Kilimo who could not win a party delegates election in a regional party election, many defectors cannot compete in their parties, they hope to get direct nomination on TNA ticket.

The TNA supremo has come of age and he has grown to be exactly like the leader who introduced and mentored him into politics.

Do you remember when Kanu gave people Ugali in the 90s and thus engineering defectors?Â  That behavior is back and is being executed a by retired President Moiâ€™s clone.

That explains why as you will see later on in an upcoming part, that Moi was very smart in choosing a successor.

He chose a â€œpolitical cloneâ€ of his, someone who behaves and engineers defections exactly like him.

He psycho analyzed UK and saw him as the man with that type of trait. The man who would fuata Nyayo, and that he is doing expeditiously.

A leader who would bring back the culture of personality cult. Â a dictatorial renaissance of De-facto Kanu one party republic.

Theocracy a work in progress

TNA is nothing but Jogoo party re-incarnate. That explains why Maragwa MP Elias Mbau and other Mt Kenya MPs sacrilegiously swore their allegiance to Uhuru while holding the Holy Bible- The Christian Book of God.

I am Muslim, but regardless of your religion that is sacrilegious. Itâ€™s huge even if you are Hindu.

The person Uhuru entrusted with that task of the oathing ceremony was obviously his surrogate and confidant Jamleck Kamau- (Kigumo MP Nairobi Metropolitan Minister and Muranga County TNA Supremo and Uhuruâ€™s powerbroker) who commissioned it. Â http://www.ajabuafrica.com/Politics-Central%20MPs%20pledge%20to%20support%20Uhuru.html

Uhuru’s political profile is a confirmation ofÂ  the curse of politics, where a 3-button donning Central Kenya leader who joined politics looking like a soft, â€œbonhomieâ€ has slowly been reduced to the mediocrity of a cult leader, no different from Ngonya wa Gakonya of the famed Thai Thathaiya Thai cult. I agree with Makau Mutua that, â€œthe kamwana Muthamaki has come of ageâ€.

That explains why I believe that UK is intent on establishing a Theocracy like that of Iran. Whereas the Iranian one is Islamist, the Kenyan one is grounded in an anti-west, anti- ICC doctrine, read ICCist doctrine.

However Ruto- letâ€™s give it to him, is a staunch Christian, and was a Christian Union leader at the University of Nairobi.

It is therefore highly unlikely that he will compromise his Christian faith and buy the ICCist doctrine, and would most likely decline the offer of becoming the cultâ€™s collegiate leader read Deputy Leader with Jamleck Kamau as the leader of doctrinal implementation.

TNA which is undoubtedly expected to be the other horse has unfortunately inherited the DP curse, of failing miserably to curve itself a niche as a national party.

Thatâ€™s not a healthy position for a party to find itself in, because it took DP two election losses, until Raila Odinga came to their rescue in their third through the famed Kibaki Tosha declaration.

Uhuru Kenyattaâ€™s 2013 strategy seems to be anchored in consolidating the DP segment of PNU, then intimidating various leaders from non-DP regions into supporting him. The intimidation includes cajoling, blackmail, arm-twisting and defector bribery.

Sponsoring of special purpose vehicles or projects like POA, UDF, and New Ford-K are part of the plan intended to split the ODM 2007 6/8 province vote with the hope that he will replicate the PNU vote of 2007.

Good luck with that because unlike Uhuru, Kibaki was a semblance of kind of national leader, who even though he lost in 6/8 provinces, he got 40%, 30% etc in other parts of the country. This time itâ€™s different as ODM is poised to win 70% in such areas.

Politburo to be headed by the supreme leader

Alternatively, UK is also considering to- in the event that he is blocked from running – to force whoever wants TNA support to defect to TNA as a precondition, a party that he controls and single handedly finances.

He would then set up a five (5) member Uhuru- led Communist style/Chinese type of Politburo.Â  Uhuru with his immense wealth would ensure all the five members are user friendly, effectively controlling the party and the puppet president.

That way, the ruling party machinery would be in his control. He would be in control of party nominations meaning, he would give direct nominations to his preferred candidates at all levels.

With party instruments firmly under his control, he would continue to puppeteer such a president at will. The president would reign but Uhuru would rule.

TNA would in such a scenario amend its constitution, adopt the South African National Congress Model that saw Mbeki fired by the then party Leader Jacob Zuma.

Under such an arrangement, Eugene Wamalwa, Kalooser Â Musyoka or Macharia Mudavadi Â the likely puppet candidates would rule at the behest of head of Politburo- the Hon. Kenyatta

The TNA Politburo will a hybrid of the Chinse Communisty Party politburo and the Supreme Ruling Council of the Islamic Republic of Iran; it will be headed by Uhuru Kenyatta, a position which would enable him ratify all government decisions and can recall the President at will!.

That means that Kenya would for the first time have the equivalent of an â€œAyatollahâ€ as the Supreme Leader. The anti-American and anti-European rants by Uhuru a few weeks ago are part of that wider plan.

With oil discovery, the cabal of powerful men sympathetic to TNA believes that it would be the best way take charge of all oil fields without accountability to anyone, hence the attractiveness of a Supreme Leader model of an â€œAyatollahâ€.

Reliable sources also tell me that as a pilot project, Njeru Githae, the Finance Minister is just a puppet minister, a robo-signer of documents, that Uhuru Â even though he resigned still takes all decisions at the ministry, but which are communicated by the â€œRats for Dinnerâ€ enthusiast.

That is why despite change of guard at the ministry, the Uhuru policy of diverting money meant for resettling Mau evictees to other sectors has continued long after he left the ministry.

The Njeru Githae appointment to the treasury docket was just a pilot project, which they think has been successful at hoodwinking unsuspecting Kenyans, and now the entire strategy is about to be rolled out to the entire government in 2013 the event that UK is blocked from running.

Kenya is headed to being like Iran, where you wonâ€™t know who is in charge, because there will be a Supreme Leader â€“ something akin to Ayatollah KhemeneiÂ  who is known to veto the decisions made by president Â Ahmadinejad.

The puppet president would be forced to rescind any decisions unfriendly to the Uhuru led Supreme Council/politburo out of fear of being recalled by the TNA party organs.

Unconstitutional but remember the party organs would have the power to recall him. Plus a way of changing the constitution to harmonize it with such an evil plan is also being considered, and this is believed to have featured highly at the much publicized Uhuru- Ruto meetings last week.

In the event that the courts prevent the duo from running, Ruto is slated for Deputy to the â€œAyatollahâ€ in the Supreme Council of TNA if he is goaded into defecting or a larger party where URP would be a corporate member is formed- most likely the Mbas which recently declared Uhuru the driver.

Uhuruâ€™s evil plan is attractive to Ruto because it offers Ruto a fall-back position as a Deputy â€œAyatollahâ€ or Deputy Head of the Politburo in the event he is barred from being part of any ticket, as President or Veep!

Such a TNA/URP coalition or merger would throw its weight behind a user friendly candidate like Musalia, Kalooser or Eugene or even Peter Kenneth, whom they would ram down the throats of Kenyans.

The Supreme Council with Waititu as the leader of its Militant affairs, and Jamleck Kamau as the Head of the Doctrine Implementation and Indoctrination of the faithful would have the de-facto powers to veto and blackmail a sitting popularly president in a highly unlikelyÂ  TNA/URP government.

â€œI believeâ€, â€œParty of Believersâ€ etc rings a bell? Christians, Muslims, Hindus et el , donâ€™t relinquish your faiths to believe in a human being who wants to create an aura of a deity around himself, whose slogans and evil designs are intent on installing himself as an â€œAyatollahâ€.

I urge my fellow Kenyans to watch vigilantly as the evil plan unfolds. Reject a Theocracy, and embrace a Democracy the way we know it. The way itâ€™s practiced in civilized democracies. We cannot afford to re-invent the wheel, letâ€™s focus on development!

Reject a Russian style Vodka President and elect a Peopleâ€™s President. A vodka President who like Gorbachev would be drunken when serious government decisions are on the table- like responding to a terrorist attack.

Add sanctions possibility and Kenya would be Theocratical disaster, a mongerel, fundamentally unrecognizable.