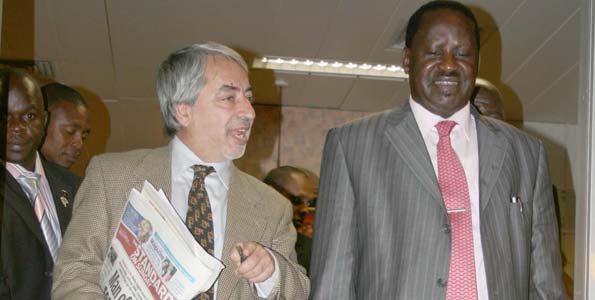 MY BBC INTERVIEW ON MIGUNA: THE ISSUES ALSO INCLUDE A DETERMINED CITIZENRY AND ATTEMPTS TO UNDERMINE RAILA
I just had a top of the hour interview with the BBC World Service about Miguna’s second deportation. I made sure that listeners knew that more than Miguna was at stake in this growing crisis.

I was very pleased see that the two BBC interviewers were following the Miguna saga closely, and they themselves said they were astounded by the level of impunity and lawless actions of three three very senior government officials, despite strong high court orders regarding Miguna Miguna. They wondered what Kenyans were making of this.

I said Kenyans are hardly surprised by the lawless behaviour, as they have experienced much worse since the election period, including the torture and murder of chief election officer Chris Msando the day he said on TV that he would ensure the August election vote was counted honestly. The election was subsequently so utterly rigged that the Supreme Court courageously annulled it – which led to the Justices being abused and threatened by President Uhuru Kenyatta.

I also said that Miguna was a very popular leader, but his persecution was also linked to other key dynamics, the most important of which was that for the first time in our history it is an aroused and mobilized citizenry that is leading the drive for change, rather popular leaders who enjoy the people’s support. It was this mass movement that had scared the daylights out of the often-murderous regime elites which control the state.

These groups, I said, are therefore trying desperately to crush this people’s movement and the challenge it poses to their hold on Kenya. They are also determined to undermine Raila who has led the reform movement for years and who unexpectedly agreed to a very risky accord with President Uhuru Kenyatta to tackle our deep-rooted ills, and at the same reduce the unrest, instability, ethnic tensions and sharply reduced economic activity that was racking Kenya.

Sections of the powerful wanted to deport Miguna again to paint Raila as having no power to influence political life in Kenya.

I was asked if Raila under these circumstances was worried about the accord’s implementation. I said of course he was.

This is a quick, rough account of the interview, I will post the link once the BBC sends it to me.