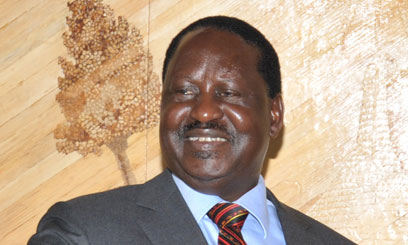 On Tuesday, June 18, former Prime Minister Raila Odinga will address scholars and international policy enthusiasts in Washington, DC at an event organised by the Woodrow Wilson Centre. This visit confirms Railaâ€™s declaration that losing the presidential race opened a window of opportunity for him to engage at a different level on behalf of Kenyans.

The former Prime Minister is slated to discuss the past 50 years, highlighting achievements and challenges on the African continent. He will also share his vision for Africa over the next 50 years, with a particular focus on Africaâ€™s future engagements with China and US.

Odingaâ€™s visit to Washington, DC is critical for various reasons. First, it comes at a time when the African Union has taken a hardline stance against the International Criminal Court and by extension the West.

Secondly, Odingaâ€™s trip is critical because it comes just days before US President Barack Obama visits South Africa, Senegal and Kenyaâ€™s neighbor to the South, Tanzania.Â  Whether Odinga will be feted by the White House remains unclear but if that happens, then it would have some serious implications on the US-Kenya relations. If Odinga visits the White House or holds meetings with top administration officials then Washington will be sending a clear message that Odingaâ€™s opinion is still very relevant in Washington and the West as a whole.

Third, Odingaâ€™s lecture resonates with recent US positions. According to the US Deputy National Security Advisor Ben Rhodes, Obamaâ€™s trip to Africa is very important to America. Rhodes states: â€œYouâ€™ve got some of the fastest growing economies in Africa. Youâ€™ve got a massively growing youth population. Youâ€™ve got key security and counterterrorism issues that we work on with African countriesâ€ adding that if President Obama â€œoverlooksâ€ the continent, the US would be â€œcedingâ€ leadership. Considering the importance the US attaches to this trip and the fact that Obama has â€œsnubbedâ€ Kenya for a second time, it will be interesting to hear what Odinga has to say on Africa- US relations.

Fourth, barely three weeks ago, US Secretary of State John Kerry attended the 50th anniversary of the African Union in Ethiopia and noted that six of the worldâ€™s fastest growing economies are in Africa and that Africaâ€™s opportunities call for â€œvigilanceâ€ by all. That Odinga is expected to highlight Africaâ€™s engagement with China and the US over the next 50 years cannot be ignored. He has a rare chance to turn Kerryâ€™s and Rhodesâ€™ words into an advantage for Kenya and Africa by emphasising true partnerships mutually beneficial.

Finally, whether or not Odinga is treated like an African statesman and chaperoned by the Kenya embassy in Washington or left to figure his way around is beside the point. The Woodrow Wilson Center is one of the most influential international policy think tanks in Washington, DC. Odingaâ€™s invitation to DC just before Obamaâ€™s trip to Africa is a clear indication that he still has a lot of thump internationally, particularly in the West. It is this kind of clout that will solidify Railaâ€™s legacy and create opportunities for Kenya if properly exploited.