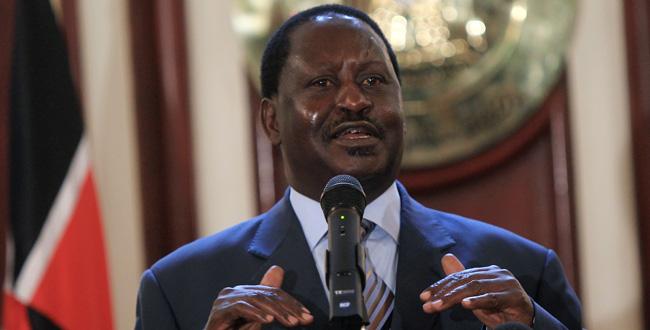 One day when the history of our time shall have been written, when we shall be long gone, when our descendants will be writing their own piece of history, somewhere will be a story about a man, who struggled and fought for democracy in this country!!

A man who gained political might through his own endeavours not someone who bought his way to the top of the political ladder. The road has been long with a lot of hurdles. You won elections in 2007 but they stole your victory. We know the deputy president wanted you to be sworn in by the military but being the statesman that you are you knew the bad would outweigh the good. You knew the political cost that would be paid by the citizens of Kenya. So you put your bow and arrow in a corner in the interest of the Republic of Kenya and settled for second best when in our hearts we knew you were the peopleâ€™s choice. I can remember you telling the people of Kenya that He who surrenders lives to fight another day, a trait of a true statesman.

In the coalition government they stopped at nothing to intimidate your office and embarrass you whenever they could. They stopped at nothing to rub it in on your face that although you had won, they were the ones in charge, you stomached all that arrogance for the sake of peace. You and millions of Kenyans only knew too well that we would take another shot at democracy 5 years down the line. In, you submitted your application to the people of Kenya for the top job.. You did what you do best, you inspired Kenyans that there was hope, in your words I would tell my friends Canaan is yonder. Millions of Kenyans knew that 2013 is the year that democracy would triumph. I personally reported at my polling station in Ruaraka at 1:30am, and millions more did… we know what happened next.. Democracy was put on trial and our able team of lawyers managed to prove to the Supreme Court that there was indeed foul play. Before I continue let me take this chance to tell the Supreme Court that their rolling was a mockery of justice. . .

I watched your speech after the Supreme Court decision and I couldnâ€™t help crying like a little kid but you told your supporters not to mourn for you that you will still serve the people of Kenya. That is when I wiped my tears and told my step brother who was seated next to me that “Wuod Nyalego osegonya. â€œ Raila Koro osegonya” which loosely translates to” Raila has set me free”. Indeed you set me free; my heart was at peace, the anger in my heart slowly began to fade away after that speech. It was a very tough moment. I know of people who couldnâ€™t watch news for a month, me included. Anyway you accepted the Supreme Court decision even though like Most Kenyans you and I never agreed with it.

This government embarked on a mission to embarrass you from the first day. Yes the government headed by war criminals knew democracy had been defeated and it was payback time. ICC Suspect number 2 William Ruto started by calling for a thorough audit of your office. The same William Ruto who saw nothing wrong with spending Kshs. 100 million of tax payerâ€™s money on a luxury jet. Anyway I wonâ€™t waste my time discussing individuals who have several cases pending in the courts of this country and beyond.

My advice to you Mr.Raila Odinga , let them have the VIP sections at the airports ,after all you have the hearts of Kenyans. Do not let them humiliate you. Beat them at their own game.

God Bless you and God Bless the Republic of Kenya!