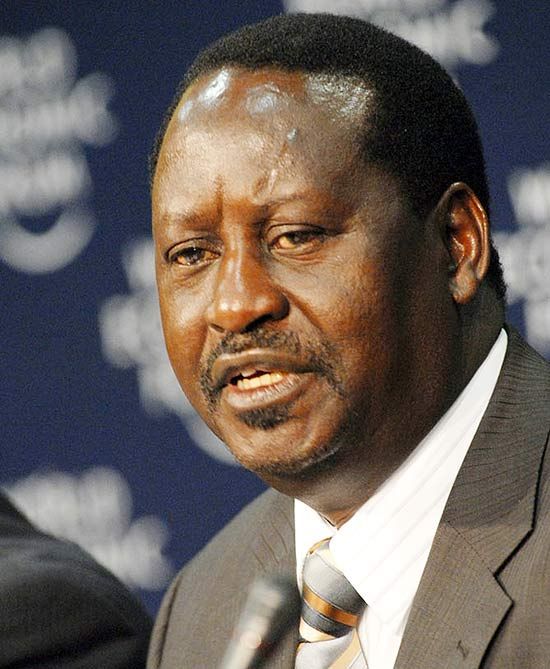 Odinga continues to command a larger than life stature amongst Kenyans, but top government officials appear unhappy. They are on the spot for humiliating him.

At a charged Kenyan football Premier League match pitting Gor Mahia FC against AFC Leopards, two top clubs in Kenya, on May 8th, a section of the fans caused a stir with their jerseys branded â€œRaila Is My Presidentâ€ and â€œRaila Foreverâ€.

Asked by IQ4News why they were still in the political mood, two months after election, the fans drawn from both the two clubs said that they consider Raila Odinga, former Kenyan Prime Minister, whom they believe was robbed of his victory, as the President.

During the match held at the Moi International Sports Center, Kasarani, Deputy President, William Ruto, who together with President Uhuru Kenyatta were Odingaâ€™s opponents in the election, suffered all manner of expletives despite awarding the two club Ksh. 500,000 each (about US$ 6000)

â€œRaila is my heroe, my President and the Peoples President. He is our father,â€ charged a football fan

The unwavering support and his stance on the International Criminal Court (ICC), that has accused President Kenyatta and his deputy, Ruto, for crimes against humanity over the 2008 post-election violence, has not gone down well with senior government officials, according to political observers.

It all starts with the privileges at the airport. On Monday while travelling to Kisumu City, Western Kenya, Odinga was denied entry to the airports VIP lounge, a fact which the Kenyan Airports Authority and Government Spokesman, Muthui Kariuki, have denied.

According to Eliud Owalo, Odingaâ€™s aide and head of his campaign team for the March 4 election, the former Prime Minister faces harassment by people out to intimidate him and take Kenya back to the dictatorial days of the past regimes. He blamed the Secretary for Cabinet Affairs, Mr. Francis Kimemia, for instructing junior officials at the airport to humiliate him.

Mr. Kimemia has denied the allegations.

Kenya Airports Authority said that: â€œKAA has confirmed that, contrary to reports appearing in sections of the media, former Prime Minister Raila Odinga and his wife Ida were allowed access and the use of the Government VIP Lounge on Monday and last Friday respectively.

Government Spokesman Muthui Kariuki said that theÂ â€œGovernment holds the former Prime Minister Hon. Raila Odinga in extremely high esteem.â€Â in a statement sent to the media. Similar sentiments were also shared by the Cabinet Secretary in charge of Foreign Affairs, Ambassador Amina Mohammed, who said that Odinga is free to use the VIP lounges at any airport in the country.

However, just hours after their reaction, Odinga was again denied entry to the VIP lounge on his way to Johannesburg, South Africa, where he is attending the African Presidential Roundtable 2013, a forum to hone policy approaches for the African continent. He is also scheduled to address University students and scholars on democracy in Africa.

The airport drama has elicited an outcry in the country, with Members of Parliament scolding the government for engaging in sideshows. Members of the Odinga-led Orange Democratic Movement Party are demanding for an apology from the government.

The Kenyan National Assembly and the Senate on Tuesday engaged on the debate about Odingaâ€™s airport woes.

â€œYou can only wish away the powers of Raila Odinga in Kenya, but you canâ€™t take the powers from him. He is a role model for millions,â€ Kakamega County senator, Dr. Bonny Khalwale told the senate.

Since leaving the government, the former Prime Minister who is also Kenyaâ€™s most detained politician (8 years by former President Moiâ€™s regime), has been engrossed in democracy and investment-related duties, both in Kenya and outside.

In late April, he was invited to give a key note address at the third Times CEO Summit Africa in London, hosted by theÂ Times NewspaperÂ of the UK. U.S civil rights leader, Jesse Jackson, described him as a â€œglobal phenomenonâ€ during a TV interview just after attending President Uhuru Kenyattaâ€™s swearing in ceremony in Nairobi.

Last week, he slammed the African Union for their reprimand of the International Criminal Court, saying the ICC remains the only option for the voiceless Africans bearing the brunt of atrocities committed by its leaders. The African Heads of States attending the summit had called for a mass pull out of African countries from the Rome Statue, arguing it mistreats African leaders. His rejection of a job offer to serve as President Kenyattaâ€™s Special Envoy, has also been a topic of debate in the country. Odinga said that â€œmy in-tray is already fullâ€ in reaction to the job offer.

Kenyans are of the opinion that despite the political differences, Odinga must be accorded the respect he deserves.

â€œThis is a man who fought for the reforms we witness in the country today. He sacrificed comfort to spearhead the war on dictatorship and any move aimed at embarrassing him is likely to cause unnecessary tension in the country,â€ Peter Bosire, a Member of Bunge La Mwananchi (The Peoples Parliament), a grouping of Kenyans that discusses topical issues in the country, told IQ4News.

â€œThe country should be one. The economy will only grow when we forge a united front,â€ said Esther Ngesa, a business woman.

As the storm gathers momentum, all will be waiting to see how his supporters and political party engage the government on the issue.