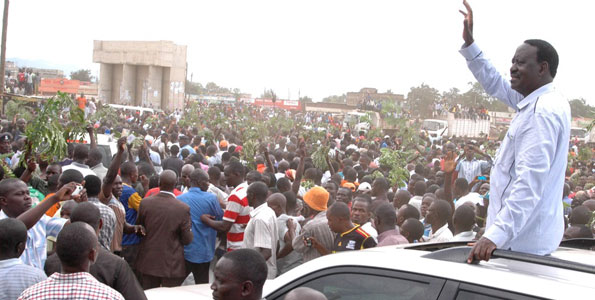 The debate over Hon. Raila Odingaâ€™s remarks at a rally in Kisumu purportedly linking the military to election rigging has been really an interesting one. The debate mainly pitting the opposition â€“ CORD , its supporters and allies on one side and Jubilee and its government machinery on the other side has gone haywire.

Our media, with its clandestine reporting, aired what they wanted Kenyans to hear. In the media reports, Raila was quoted to have linked the military to election rigging at the Bomas of Kenya in the last elections. Looking at Railaâ€™s statement, this is what he said, â€œWhat happened at the Bomas was like a military coup.â€

Jubilee, colloquially known as the government, and its gullible components of IEBC, and some â€œpowerfulâ€ persons in government picked up the distorted line and released hectoring press releases. These Uhuruâ€™s â€œattack dogsâ€ came out breathing fire. This ranting was as a validation for their â€œfat pay slipsâ€. Else how could they prove to their boss that they are worth the task?

The Kenyan media which is highly compromised opted to boost their sales through propaganda, lies and outright falsehood. Having a government with misplaced priorities and unworkable policies in place, the media has been lacking content to report from the government side. Therefore, I can understand their action.

It was equally interesting to hear from the quarters which demanded an apology. They are the usual irritating elements led by Kimemia & co. IEBC in a desperate attempt to cover its ugly face moved quick to demand an apology. To this compromised election body, they conducted the most â€œfree and fareâ€ election in the world.

Methink IEBC and its boss Isaac Hassan committed an â€œelection offenceâ€ against Raila and his supporters for demanding an apology for a crime they openly committed. We all recall how the overrated BVR machines suddenly became dysfunctional at the hour of need. No amount of threats, propaganda, coercing or publicity will clear the IEBCâ€™s name from the record of â€œcriminalsâ€. They should know this and honorably resign.

Jubileeâ€™s kneejerk reaction to this issue portrays a government that lives in constant fear of Raila Odinga. No wonder they have been making stupid moves to drive Raila out of competitive politics. Instead of paying â€œpengâ€ riders in â€œKisumoâ€ to conduct a peaceful â€œdemonstrationâ€ ostensibly in â€œsupportâ€ of Uhuru Kenyatta, it would have been sensible to consult a Luo to give them a fitting rendition of Railaâ€™s statement.

It was perilous for a government that pride itself of leading the citizens to rely on concocted and distorted media reports by journalists from â€œother regionsâ€ who doesnâ€™t understand the Luo language or worse still, to rely on Kimemiaâ€™s own version of interpretation.

TNA sycophants, and their crowed of hecklers werenâ€™t left behind in the debate. As usual, they approached it with a tribal mind, hate and vengeance. They threw epithets and all manner of slur at Raila and his supporters. Remember, these are the cliques who are fast to preach the â€œwe are oneâ€ shit.

For jubilee crowd, it was another waited opportunity to pour their hate filled attack on their enemy. They jammed social media, blogs and mainstream media with all manner of nonsense in the name of comments and opinions.
In the dailies, some government leaning columnists and half-baked academicians pretended to offer an intellectual analysis on the matter. However, their biasness and tribe clogged their mind and reasoning. I couldnâ€™t note any difference between the so called intellectual opinions by jubilee academic intellectuals from the posts by academic simpletons and social media hecklers who support jubilee.

If you have lived in this country long enough, you will agree with me that virtually all government departments are compromised and controlled by the executive. The military involvement in election rigging is self evident. I think this is the reason why the media and jubilee confused themselves.

They couldnâ€™t actually truncate Railaâ€™s statement from the reality of the matter. Actually, the reality is so obvious to be ignored. We are a country that lives in constant denial and the state and its handful beneficiaries of corruption and looting want us to continue that state. Any liberal opinion is always viewed as divisive and unwarranted.

Anybody with a liberal mind is instantly branded an enemy of state and an enemy of â€œour tribeâ€. These morons of state do not hesitate to crash their enemy even if it means tearing the country apart. What counts to them are their selfish interests disguised as public interest and their determination to cover the evil past of their former and current masters.

As long as those who fight for freedom and an expanded democratic space exist, they will always be quoted out of context, threatened and bullied. This however shouldnâ€™t cow anyone into submission. Propaganda and lies are short lived but truth will always stand the test of time.

The writer comments on governance and socio-political issues
mcaugo@gmail.com, www.facebook.com/honjim.bonnie