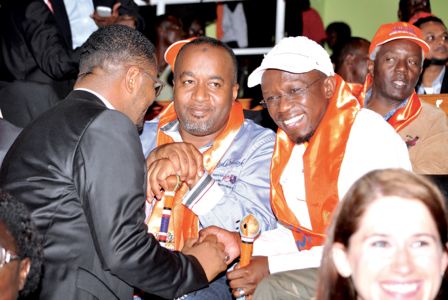 Of late, I have been keenly following Ababu Namwamba and as I recently watched his interview on TV, I could not help eavesdrop on a conversation taking place on the other table with the question, â€œDoes Raila know that Ababu Namwamba can be his Kingmaker?â€

Indeed a Kingmaker is a powerful person or group who influences decisions about who will become a political candidate or occupies a given political position and goes ahead to work towards it.
History is replete with such people and Kenya has the following: â€œThere is no Independence without Kenyattaâ€ roared Jaramogi Oginga Odinga in the early 60s, and Kenyatta â€“ at an advanced age ruled for 15 years till death. â€œMoi is the man for the Jobâ€ said Sir Charles Mugane Njonjo in 1978 and Moi â€œthe passing cloudâ€ stayed on for 24 years as President,
â€œKibaki Tosha,â€ thundered the son of Jaramogi â€“ Raila Amolo Odinga in 2002 and Kibaki at an advanced age and in wheel chair became the President of Kenya.
â€œI may not Know who is going to be the Next President, but I am clear in my Mind who will notâ€ and â€œKusema Na Kutenda with Vijana for Uhuruâ€ were common phrases used by William Kipchirchir Samoei arap Ruto and Uhuru with ICC tag on his neck became President in 2013 (na muta do?).

The conversation and discussions on the other table became very intense with one discussant remarking, â€œAll Raila needs is the ready to drink juice called Ababu, Joho and Nanok team. This is a God sent opportunity for him.â€ â€œBut can Raila listen or does he ever listen?â€ asked another discussant. â€œWhat I know is that Railaâ€™s Kingmakers cannot and will not be Jakoyo, Dalmas, Orengo, Kajwanâ€™g Onâ€™gwen, Akonâ€™go, Anyanâ€™g, Oburu and etc etc.â€ remarked another person and the discussion went on.

What however caught my attention as we were parting ways, was a question from one person who was quite throughout the conversations and who roared as he stood up ready to go, â€œWhat makes you people think that Raila wants to be President of Kenya to make him want Ababu Namwamba and his team to be his Kingmaker?â€ Good question, I thought. Does he?