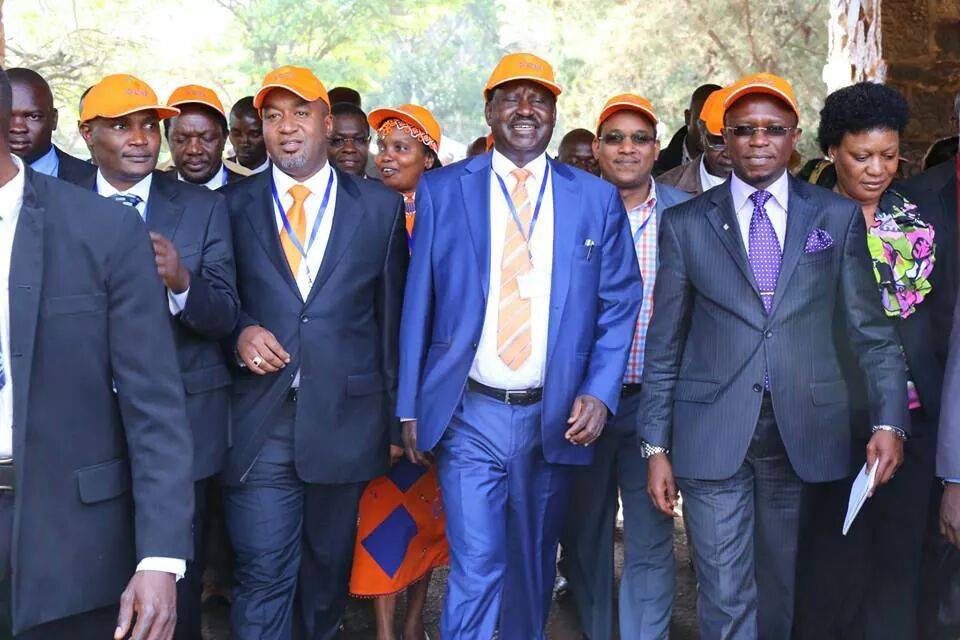 By William Makora
When the Orange Democratic Movement, ODM, National Delegatesâ€™ meeting aborted in February this year before its Party Leader Raila Amolo Odinga flew out to a three monthsâ€™ vacation in America, it was presumed that the opposition party would sink into a miry deep sea, scattered and dismembered irreparably.

When Raila returned into the country and encountered dissents to his Saba Saba rallies it became sufficing to surmise that a scorching sun was, inevitably, fast ruining the veins of the party. A number of its key members were seen embracing rival groupings, or heard mooting formations of new political parties. Activities silhouetted except for a Mathare parliamentary by-election which the party surprisingly captured to regain sounds for a referendum. The referendum dubbed Okoa Kenya is still underway though.

It was imperative to note that prominent Raila allies and party stalwarts like Prof. Anyangâ€™ Nyongâ€™o, James Orengo and Jakoyo Midiwo were left out of the formation. They have been the most influential instruments believed to steer decisions of leadership of the party in the past years. Their exclusion is not seen as a suicide but a tactical game for the grand plan the doyen of opposition politics has for his final stab at power in the next elections.

Eyes on the prize

By restructuring the ODM, Raila is sending camouflaged message that he has trained his eyes on wrestling power from President Uhuru Kenyatta come next General Elections. As far as Kenyan politics is concerned, the team yet adds no real value to the challenges on the path of the pursuit for power. There are no regional appeals.

Since the new-face of leadership poses no much difference in terms of national influence except in age and gender, Raila may not be, really, hoping to acclaim presidency through elections but some sort of pressure. Whether civil or clandestine, the man veritably holds a scheme up his sleeves. President Uhuru and his Deputy William Ruto, who are stricken by a sneaky ICC bug thereby drastically coloring their feathers, might be so baffled by mysterious spates of massacres that he really has a face or name as he wished he would. Backed by security personnel, Uhuru once said Raila had a hand in his security woes but Kenyans did not believe them. If their outbursts were informed then there may be no remedy for the loopholes in a near future. This spells doom for Kenya

Raila seems unwilling to leave anything for chance in his final shot (after all he is more experienced and connected). It is left for time to tell what a do-or-die scheme brings, not only to the ODM Leader but also, to Kenyans.

Currently, the ODM leadership and membership enjoys sanguinity initially stolen away by the ruling coalitionâ€™s slur of â€˜being analogâ€™. That is after the â€˜digital teamâ€™ sacks and replaces itself in the security docket with Rt. Major Joseph Ole Nkaissery, an ODM legislator. It simply denotes that the â€˜digital appointeesâ€™ have terribly failed in their assignments leaving Kenyans at the mercies of strings of massacres. Nkaissery is yet to sit and work.

In the turn of the events, the leadership of the opposition in Kenya may keenly be studying the ruling coalition, capitalizing on its faults especially failures on security measures and readying itself for a surprise take over in future. At around mid this year the government had to, cautiously, beef up security in Nairobi and other parts of the country and shut off the media from covering Saba Saba rally at Uhuru Park where the opposition gathered ostensibly to declare a devastating resolve after insecurity monster threatened to ravage the nation. It is not yet clear what the gag on media coverage meant to achieve but Kenyans still fear a worst massacre might occur if the opposition ever made their threats true.

As it was/is clear, the opposition did/has not dropped the Saba Saba plans. It seems it will be executed sometime before the end of the current term especially if insecurity monster tramples more upon the nation. And the President will have no choice but to honor it however unceremoniously. The international community will rush in and install a transitional government that will last as long as order for suitable elections is attained in the republic. That may not mean Raila becoming President of Kenya but Raila leaving behind a nation he has fought to balance. His soul may go to rest.

Buoyed by the spirit of the new team, the ODM may work with the Coalition of Reforms and Democracy, CORD, to pile pressure on the government to curb rising tensions of insecurity. With insecurity and instability, the opposition leadership will be able stream out its plans. Whether it succeed or fail will depend of how they are executed, especially those with widespread scopes. Relations within the coalitions will also play their parts.

By outsourcing leadership from members of the opposition, the President seems to lack ideas on fundamental areas. It is puzzling how the government might deal uprisings in case they come-calling. If the government succeeds in stalling the security menace, the President has a chance to pull his secret strings in the opposition in order to destabilize it. Kenyan politicians are mere brokers. However, that will cause more confusion in politics of this country.