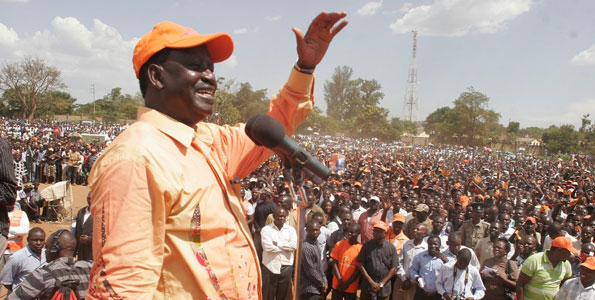 And so next week CORD is expected to win big in 7 out of 8 provinces. Rift Valley is a new addition where Raila is poised to win very narrowly 40.5% for CORD to 40% for Jubilee.

However given the slim margin, analysts still view R.Valley a toss-up which can go either way since Cord lead is within the margin of error.

Jubilee is poised to be Number 2 nationally followed distantly by AMANI, with a landslide win in the +95% in Central Province for Jubilee. Thatâ€™s an A. A clap for Jubilee!!! Good job in Central.

Railaâ€™s projected win of Eastern adds to his numerous provinces, as shown by the following table

I project 6 provinces for CORD, 1 province (Central) for Jubilee and a tie in R.Valley . R. Valley as observed in my last article is a tossup which can go either way.

Remember in 2007, ODM was pitted against a sitting President who was a moderate. Raila defeated Kibaki, even though he was tougher to beat. UK is a rightwinger, a KANU neo-Conservative by birth and indoctrination.

Uhuru is thus a polarizing figure that scares away a large swathe of the nation. He is a piece of cake to Raila and Kalonzo who are now more seasoned, and better networked.

That is why there wonâ€™t be a second round. Forget about sanctions debate, thereâ€™s not a chance there would be sanctions because ICC inductees wonâ€™t win. As such itâ€™s a useless debate, because this is Uhuruâ€™s last game.

This is probably Uhuruâ€™s last stab at the presidency, for obvious reasons, that I chose not to delve into. He has put up a good fight, but unfortunately, the math didnâ€™t just work out.

Kenyans seem settled on a different candidate at this critical moment of their nationâ€™s history. I pray that he resists any attempts by hardliners around him to convince him to not concede.

It seems futile for him to prepare and/or rehearse a victory speech, because the odds are stacked against him, but for the sake of peace, the nation and his image at The Hague, he should have a concession speech ready, to be delivered digitally via skype, and/or Google hangouts if possible. This is deep and Teleprompter concession speeches are acceptable too.

On Election Day watch the 5 Kalenjin URP counties. Raila doesnâ€™t have to win them. If he gets at least 25-30%, then CORD will take Rift Valley.

If Jubilee is restricted to only 5 Kalenjin counties, and 2 TNA counties (Laikipia and Nakuru), with Raila winning the rest of the Rift Valley of Maasai, Narok, Pokot, Trans Nzoia, then Jubilee would only win one Province- Central.

There would be something absolutely wrong with our democracy if one province can make a leader president. The world will laugh at us.

The Kalenjin nation is where Amani plus Moi family will spoil as many votes for Jubilee as possible.

Anything Amani gets in Kalenjin nation increases CORDâ€™s chances for taking Rift Valley. Amani does more damage to Jubilee than it does for CORD.