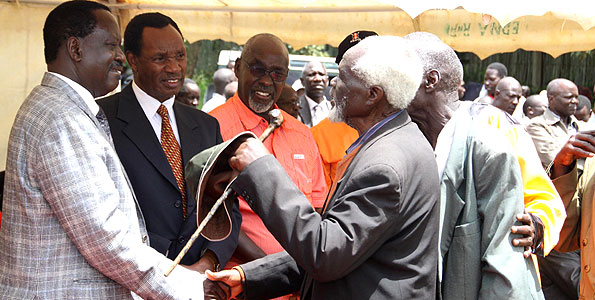 The intense behind the scenes lobbying between CORD principals and the Kalenjin elders is reported to have succeeded, with the adoption and inclusion of very progressive propositions by the elders into the CORD manifesto.

The CORD manifesto ranks Agriculture high in the agenda of the Raila led coalition government. The aim is to use Agriculture as the spring board to massive job creation and enhance food security in the country.

It was nice to see that Agriculture was top in the list of the CORD government says Kipkorir arap Menjo one of the farmers from the community who was privy to the discussions.

”We made a strong presentation with a focus on sectors that will help our people and not the individual gains like what is offered by the Jubilee alliance”Â  arap Menjo added.

Agriculture remains the backbone of Kenyaâ€™s economy and the prime source of livelihood for majority of residents in the Rift Valley.

The CORD alliance principals undertook a bold move to prioritize and implement key interests and grievances of the Kalenjin once the alliance assumes office after the March,4th general elections.

In a bold move, the CORD principals led by Arap Mibey (as Kalenjin elders fondly refer to Hon. Odinga) are said to have agreed to prioritize and implement key interests and grievances of the Kalenjin once the alliance assumes office after the March, 4th general elections.

The region will benefit more under CORD government than Jubilee or any other government since independence. The elders declared that development and progress encompasses inclusivity in governance.

The region is assumed to be largely pro Jubilee BUT the undertaking by the CORD alliance will swing the mood on the ground as the discussions with the elders is set to be passed onto the grassroots.

CORD, which has consistently been leading in opinion polls, will easily implement the promise to the Kalenjin as the new constitution doesnâ€™t require elected MPs to be appointed to the cabinet. CORD could pick any qualified professional who has talent and credentials to serve Kenyans.

The Kalenjin professionals will be tasked to jump start agricultural revival program that will re-engineer Rift Valley as the bread basket of Kenya and at the same time ensure Kenya’s food security worries are buried forever. Unlike Jubilee which has recycled most operatives from current parliament through direct nomination tickets, CORD is giving prominence to fresh blood to inject fresh and game changing ideas that would jumpstart the faltering Rift Valley economy.

CORDâ€™s promise is timely and prophetic, as it responds to an urgent developmental need and concern that lives in the hearts of Kalenjin and farming folk in the country.

Access to affordable credit and lowering interest rates plays a critical role in rural development, a factor that is not lost on Kalenjin elders, who reminded the CORD principals of the days of vibrant farming cooperative movements that gave farmers more bargaining power and market linkages, lifting many out of poverty.

The elders, prominent Farmers and leading politicians played a pivotal role in getting the proposal agreeable by the CORD principals. The proposal will also focus in restructuring and improvement of the Sports sector to diversify disciplines so as to maximize benefits.

The CORD principals undertook to give subsidies to farmers, initiate value addition to agricultural produce e.g. cereals, horticulture, timber and livestock products (milk, beef and hides) and ensure strategic marketing of these products for better income to farmers directly.

“A Livestock Exchange, a first of its kind in Africa, would be established to ensure that livestock and Livestock product prices are driven by market forces rather than middlemen and cartels who have for so long exploited farmers in Rift Valley, and ASAL areas” observed one of the retired professionals who was part of the team.

CORD will also prioritize the structured return of the Kenya Co operative Creameries (KCC) to dairy farmers; conclude payment of hundreds of millions owed in arrears to thousands of dairy farmers. Â The arrears have been accruing since KCC was put under receivership. â€œThe deal is to pay farmers in the first 100 days of CORD assuming powerâ€, says FORA National Chairman Micah Kigen who was privy the discussions.

CORD also undertook to commence immediate setting up of a fertilizer factory in Uasin Gishu County. In order to attain the target set in the CORD manifesto, the principals agreed that at least 10% of the national budget of the national budget will be invested in agriculture and related sectors like irrigation of arid areas, instituting support services and industries to complete the sustainable national food security target.

By undertaking to allocate 10% to Agriculture and related sectors CORD is way ahead of the current 4.5% of the budget which the Jubilee coalition is determined to retain.

The Agriculture cluster alone with related industries and businesses offer the clear window to generate a large part of the CORD’s promised 1 million jobs per year, from the farms to processing, storage, transportation, industries and trading; Kenyan youths will get plenty of opportunities to earn a descent living with farmers getting high income due to value addition and elimination of unnecessary middlemen.

In Sports CORD undertakes to offer direct government funding and investment in athletics promotion from the grassroots level to mainstream, the welfare of athletics stars and trainers Â will also be on target ostensibly to protect them from exploitation and neglect.

The CORD government offers to help diversify the sector to include other disciplines like football, tennis, rugby, motor sports, cycling among others and their promotion to international standards. The government will build and maintain modern sports facilities and training institutions and market them internationally as high altitude training facilities.

Kalenjins are good runners, but their resilience could also be directed towards other sports for which they are world-widely known to be genetically predisposed to endure. CORD is determined to harness this strength and apply it to other sporting activities.

Arap Mibey and the community

Railaâ€™s first choice for running mate was Ruto, as is well documented. However, even though Ruto declined his offer, CORD principals committed to compensate Rift Valley adequately for losing out on the running mate position and has reserved the top seat of Chief Secretary and Secretary to the Cabinet plus the two key Cabinet Secretary slots for Agriculture and Internal Security. This is significant given that only 15 cabinet positions would be available to be shared out among Kenyaâ€™s 42 ethnic communities under the new constitutional dispensation.

The undertaking by Raila and his CORD team puts to shame the bragging by the Jubilee alliance which is trailing in opinion polls that they will cater for Kalenjin interests thus most deserving of the votes from the region.

Jubilee alliance only gives an individual (William Ruto) a post (Deputy President) and an undefined promise of half of the government, the offer by CORD is comprehensive, real and tangible, revamping agriculture will trickle down to the very bottom in the village.

This and the fact that CORD is leading in all opinion polls, behooves the Kalenjin community to calculate wisely so as not to be left out of the next government like it happened to us in 2002. Ruto might be Jubilee running mate, but going by the numerous credible opinion polls, he seems to be the Deputy Official Opposition Leader designate.

The CORD principals can be believed and trusted unlike Uhuruâ€™s TNA who may not honor the full promise. Opinion polls show that Uhuru is not trusted by 6/8 provinces, this raises doubts as to whether Uhuru can deliver victory. Ruto might espouse the Kalenjin aspirations, but those are useless if it only leads URP to the opposition benches like happened to KANU in 2002.