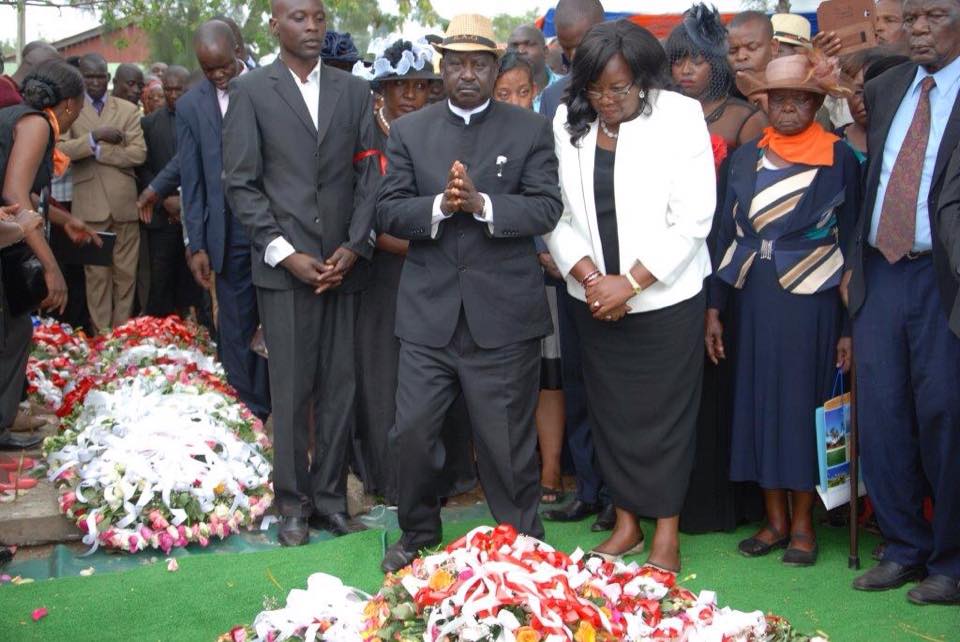 A giant has fallen out of our midst and gone silent. It is our fate to bear the pain of seeing Gerald Otieno Kajwangâ€™ depart.

Kajwangâ€™s thoughts and spirit opened doors to new and freer frontiers. He nurtured dreams that gave hope to the hopeless.

His powerful voice shook the powerful and the mighty.

The man we bury today was tied to me personally, with a cord that no one can break, in ways many may never understand. May he live forever!

You had to live my life with Kajwangâ€™ to appreciate the ties that bound us. You had to be at the centre of the struggle to know why this sharp legal mind has had to die poor while peers and colleagues of lesser talent minted money to tease and taunt him.

You had to come of age in his time to understand that someone had to rebel for freedom to come.

Our paths first crossed in the 1980s.My harrowing tales of life in detention became his reason to join the Change Movement. Kajwangâ€™ felt summoned by history to stand up for our nation when imprisonment, torture, assassination and murder swept the land.

He embraced that timeless call of Dr Martin Luther King Juniorâ€¦ â€œA time comes when silence is betrayal.â€He heeded the call to seize the moment and give coherence to the dreams, wishes and frustrations of our people. He brought vigour, charm and energy to the Change Movement.

Pro bono, he took up the cases of youths thrown into police custody for crying freedom. His Law offices became the heart of our political planning. Kajwangâ€™ became a friend, a brother, a keeper and a comrade.

But we swore to keep walking, straight into what we believed was the Promised Land.

We believed in the justness of our ideals and shared the certainty that we would triumph.

We boiled with ideas about freeing our people and making our country great.

But we also shared precious moments of joy and laughter and together, enjoyed the taste of freedom when it arrived.

With Kajwangâ€™, we made decisions that shaped our country: to resign as MP and seek fresh mandate in 1996, to have NDP present a presidential candidate in 1997, to take Goldenberg case to court.

Kajwangâ€™ was intricately involved in the negotiations that led to cooperation, partnership and merger with Kanu.

He was party to our decision to pull out of Kanu. Kajwangâ€™s passing therefore leaves a monumental emptiness in me and in all his friends.

He probably would have wanted us to look back on our struggles with pride, sing on and march with greater resolve and faith in what lies ahead.

Kajwang remains in the super league of foot-soldiers of our freedom and democracy. Rarely do we find candour, humour, fieriness and humility all rolled up in one character. He electrified the crowds with his witty and humorous presentation of weighty political matters at our public rallies.

In his death, the Orange Democratic Movement, the CORD fraternity and the Change Movement have lost one of their most fearless and eloquent public speakers. Kajwangâ€™ never retreated from a battle that was not finished, never shied from responsibility and never shifted blame.

He was a worker who rose early to rise and retired late. He immersed himself fully into the job of Cabinet Minister for Immigration, initiating reforms against strong opposition from within that was determined to fail him.

No human being is perfect. Kajwangâ€™ had his failings. Revisionists that our nation is blessed with will lurch on to these to rewrite history and make a failure out of this unsung hero. To many Kenyans though, Kajwangâ€™ was a fortress of renewal, determination and resilience worth our emulation.

Fate has determined that Kajwangâ€™ travels ahead of us. I want to believe that when our time comes, he will be there to meet us, and seek to know how we fared with the struggle and probably ask that we sing Bado Mapambano.

We have a pact with him to take the liberation flag right to the mountain top. Then we shall hand over the spear of the nation to our successors and with pride say, here, the weapon to safeguard a nation delivered by the heroes of our past.

When the roll is called up yonder of men who gave their all to our nation, Kajwangâ€™s name shall be there.

Be assured that we will strive to bring unity to our divided land, peace to our tormented country, equity to our unequal Kenya and dignity to our dehumanized citizens.