With his back to the camera, Raila Odinga, fondly referred to as ‘Father of Modern Democracy in Kenya’ visited Martin Luther King Jr Memorial in Washington DC, the seat of US government, and stood in front of an inscription which read:

“Make a career of humanity, commit yourself to the noble struggle for equal rights. You will make a greater person of yourself, a greater nation of your country and a finer world to live in”.

Those who grew in the Kenya of 1980’s best understand what it means to be free today. The struggle for people’s rights has formed part of Odinga’s life in very fundamental ways- a fact a certain section of the Kenyan political elite now controlling the reins of power would want everyone to forget.

It is a struggle Odinga believes is not yet fully won.

Odinga, a second generation African leaders after the continent’s independence ‘fathers’, has in the recent past increased his sharp rhetoric about the future of Africa with successive speeches and interviews where he minced no words on the deteriorating adherence to the rule of law by most actors in the African continent; most notably the renegade despots forming a tyrannical Big Men’s club called the African Union.

“Never trust individuals, only institutions count,” said Odinga while addressing thousands of students and faculty at the University of Pretoria, South Africa.

Martin Luther King Memorial is one of the many reminders of the struggle for civil rights and equality among human races of the world, a struggle whose full benefits is yet to be realised in Africa.

Interestingly, Dr King used to refer quite a number of times to Kenya in his fiery speeches while arguing the case for civil liberties. 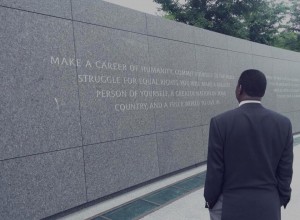