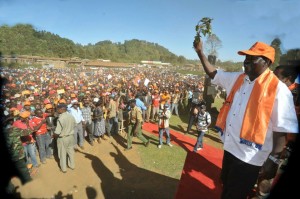 My projections show an overwhelming upper hand for Raila Odinga in Eastern Province.

The following is the breakdown for Eastern, where CORD will take Ukambani in a clean sweep as a revolt against Jubileeâ€™s mistreatment of their son Kalonzo Musyoka.

Marsabit, Isiolo, Moyale, or the upper Eastern will definitely be CORDED.

Ukambani is an uncontested CORDED territory as observed even by Mutahi Ngunyiâ€™s Tyranny of Numbers.

This is important because in 2007, Raila lost Eastern, where he only won 5% mostly from the Marasabit-Isiolo-Moyale belt.

However with Kalonzoâ€™s Ukambani in his column, he is poised to take Eastern with a bangâ€™, plus retain his dominance of the Upper Eastern vote.

It is inhabited by Samburu, Turkana who tend to caucus politically with the Maasais. We expect Gabbra,Â Burji,Â BoranaÂ andÂ Rendille, who are Nilotes to support Raila who is a fellow Nilote with whom their ancestors migrated from The Southern Sudan.

Remember Raila has huge play in Meru country, occasioned by Miraa politics, which is a matter of life and death, whereby sanctions would greatly impact them.

The Meru economy exclusively relies on the Miraa trade, and sanctions would obliterate the Meru economy. They need an ally in Statehouse who can network with Netherlands and the EU to reverse Miraa ban in Europe.

Uhuru would make the Miraa ban worse than it already is right now. Other than Miraa- Coffee, Tea, Banana, and Dairy farming would all be stifled by sanctions.

Expect Raila to eat into Meru vote. Uhuru might take Meru vote, but not at Higher margins like Kibaki did. Their affinity for Kibaki IN Meru was geopolitical, due to the proximity of Meru to Nyeri, and the shared geopraphical feature- Mount Kenya. Uhuruâ€™s Gatundu village is like 5hrs drive if you are doing the speed of the Miraa truck.

Itâ€™s the reason why even Kiraituâ€™s Mbas preferred to go it alone when Kalonzo failed to be Jubilee candidate. Yes Merus intermarried with Kikuyus, but those from Nyeri not Gatundu.

Thereâ€™s not a way on earth to move cattle dowry from Meru to Gatundu. Thatâ€™s what I mean that no historical relationships or chemistry between Uhuru and the Meru. But Nyeri to Meru, sounds closer, is why Kibaki dominated Meru politics . So both Raila and Uhuru come from far, in Meru terms. And thatâ€™s why; they will share the Meru vote, giving Raila a landslide.

The Meru people donâ€™t trust Uhuru as they did Kibaki due to geopolitical reasons. Their little affinity to Uhuru is only guided by a perception that Kibaki is behind Uhuru.

Otherwise, they are geopolitically closer to Kalonzo than they are to Uhuru. The only bond I can think of is the ICC equation where Muthaura is facing a similar accusation with Uhuru.

Other than that zero. He doesnâ€™t connect with the Ameru people. Delay this election by 2 months and he will lose the Meru vote in toto.