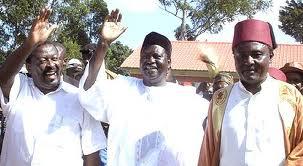 The year 2013 is as historical as the freedom of our nation from bondage of autocratic rule by foreign forces. Exactly fifty years ago Kenyans were winning the war of removing colonial crust from our faces. It is a painful history though. Many Kenyans suffered worst of brutal infractions as the colonialist literally imposed anarchy in the land. It would not be tolerated. It was not acceptable. An imperialistic discord, factored by ensuing sense of belonging and age, earned the nation the facade we are celebrating today. The challenges we have encountered in the years and our ability to handle them team up to bring confidence in our spirits. We are moving in the right direction!

As we enter the gates of the Jubilee Year this month, crucial mountain of challenge hangs above our heads as a nation. We need to take a special task of escape or we perish under its weight, for if it does fall on us it crushes us; if we escape it, we live on to tell a sweet story to coming generations of our nation.

Monumental in this yearâ€™s history is the forthcoming transitional general election. On its two sides of the coins are, each, the dreadful face of post election violence of the last term and the hopeful implementation of a new constitutional order. The two begs for real optimism, sobriety and goodwill. The two are at huge risk due to major opposing forces; one dubbed Jubilee Party and made of principal suspects of the post election violence, Uhuru Kenyatta and William Ruto, who are due to begin cases of crimes against humanity at the International Criminal Court in The Hague, Holland and another one dubbed Coalition of Reforms and Democracy under stewardship of Raila Odinga and Kalonzo Musyoka. The former has vowed to bar the latter from ascending to power.

Like the struggle that culminated into independence of the nation fifty years ago, the battle between the Jubilee and Cord teams reincarnates that between colonialists and Kenyans respectively. While the colonialists had immense authority backed by fighting resources, the Uhurutoâ€™s Jubilee alliance has the tribal numerical and the finance. Alongside State machinery, the Jubilee party has effectively exploited their artillery and literally bought allegiance of Railaâ€™s confidants with latest casualties including Hon. Charity Ngilu and Hon. Joe Nyagah. These antics call for the Cord leadership to swing into earnest action this year and consolidate a zone like the Luyahland.

Raila and the Cord team may be keen on raising a non-tribal leadership but, as it stands today, tribal path paves homestretch to the job. Otherwise, unity of the nation would remain a vague wish for many years.

Since the politics of the nation is tribal, Raila and Kalonzo have no more time to waste. They cannot afford to let the Western Kenya votes go into the drain. They have high opportunity in embracing Hon. Musalia Mudavadi. The man holds the swing vote that must not be ignored. Since Mudavadi differed with Jubilee after a one-week-alliance, the ball squarely dropped in Cordâ€™s court. They must not let him divide the votes by either standing alone or joining other lesser forces. They must grab and accommodate him.

And my appeal to Raila Odinga is: please, make it a New Year Mission to Canaan! Do not ignore it as you did with Rutoâ€™s case when you thought you could ride on the backs of Hon. Henry Kosgey, Hon. Sally Kosgei, Hon. Franklin Bett and Musa Sirma or reach out the people by yourself. You must have realized that Kenyans are not only equally selfish but also utterly tribal; banking more on kingpins than lesser leaders. The Cord should not struggle reaching and harnessing the Luhyans. There is a rich chance in getting Mudavadi. He is veritably attracting the sympathy of the people especially after Uhuruto fiendishly dismissed him as Shetani. Furthermore there is no real bone to chew between you and him.

As I write this article today, I feel the burden of the nation going into the hands of the Jubilee suspects who will not only spend most of their time in foreign courts but also bring upon the nation hefty sanctions. We have not enough strength to bear it or walk that path. We want to sell our products out. We want to receive goods from the developed nations. We do not want to lose the contacts.

In this noble mission that should see the Hope-Cord team form government this year in a single race, signs that tend to portray you, Raila, as a proud politician who will not take remedial measures to pursue rebellious former associates at dire times of need must not be seen in you. They should belong to last 31st December dating backwards. Luhyans know that Mudavadi is more Luhyan than you are; and that forms the politics of this trite. Next meeting in the house of Francis Atwoli among others should not exclude the media unless you are meeting the vote-basket in Mudavadi and you do not want your vows to be overheard. I think that will promote hopes of the people of this nation.

As I write this article today, I feel the burden of the nation going into the hands of the Jubilee suspects who will not only spend most of their time in foreign courts but also bring upon the nation hefty sanctions. We have not enough strength to bear it or walk that path. We want to sell our products out. We want to receive goods from the developed nations. We do not want to lose the contacts. It shall deny us a table in world meetings where economy and vital support projects are discussed. That is not what we want to take. That is not what the nation can pride in. It denies us form and foundation.

Kenya can go down the drain if Raila and the Cord team sleep on job. If the Jubilee duo forms the next government, blames will squarely heap upon Raila Odinga and Kenyans will say; â€œYou failed to negotiate expeditiously with other leaders!â€ That will go on books to paint him as an arrogant man who failed to mend his fences conclusively. That would not be a good repute to leave in the book of legacies.

Raila and the Cord team may be keen on raising a non-tribal leadership but, as it stands today, tribal path paves homestretch to the job. Otherwise, unity of the nation would remain a vague wish for many years.

For a Jubilee year, let Cord give us a new leadership. Luhyan votes are crucial in determining the results.