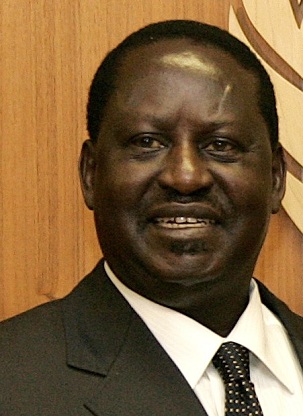 I want to start by congratulating you for remaining steadfast for the ideals that you have stood for and cherished all your life. It was great seeing you come out strongly to challenge the electoral process where elections seems to be always won at the tallying level and in the Board Rooms.

It basically beats all logic for an Electoral Body to invite Kenyans to come out and vote for their leaders and then, fail to respect the same wishes of those voters.

I was at Radio Ramogi this morning between 8.00am and 9.00am and we were looking at the lessons learnt so far. And I want to state at the outset that I firmly support your democratic right to challenge the results as announced by the IEBC Chair on Saturday the 9th March 2013.

In my small capacity and within the confines of my tallying centre in my house, I was able to record and realize the inconsistencies with the results as announced. I must assume that being a candidate, you and your team members are privy to many more such inconsistencies and the best arbiter is the Courts of Law.

You have done many Kenyans proud by choosing to seek legal redress and I am convinced that our Judges will stand firm on the right side of history.

With all this said, I want to address a few issues that might be very painful to the men and women around you. You have been the epitome of democratic reforms and agitation in Kenya. In the company of the great Jaramogi Oginga Odinga, the late Masinde Muliro, Hon Charles Rubia, Hon Kenneth Matiba, the late Martin Shikuku, Hon Prof Peter Anyang’ Nyong’o, Hon Gitobu Imanyara, Hon Kiraitu Muringi, Hon Paul Muite and all those celebrated sons and daughters of Kenya, you fought for The Second Liberation.

You were detained for 9 years fighting for justice and democracy for Kenya. You are truly the architect of The Second Liberation as sang by the late Musa Juma. When we won the repeal of section 2A of the then Constitution, a late comer to the liberation struggle in the name of Hon Mwai Emilio Kibaki ended with the big prize. He had only belatedly joined in the Second Liberation.

He beat all the Liberation Heroes to the tape and to the State Office.

He then attempted to saddle us with a watered down Constitution in 2005, and again, you were at hand to deliver and help Kenya. In the Elections of 2007, against all odds, Mzee Kibaki was pronounced the President and sworn in at night to the State Office. Kenyans were not amused and all hell broke loose. The rest has been history.

However, you had a negotiated settlement where you became the Prime Minister with half of the Government. I still vividly remember the then US Secretary of State Dr Condoliza Rice saying that there must be REAL power sharing.

I honestly did not know how real power sharing only translated to appointing 22 Ministers and their Assistants! Real power sharing meant taking half of Government. You may have been let down by your immediate handlers and advisers- the same team that never saw your votes going in 2007.

In 2010, you helped to deliver a New Constitution and with it, we now have a reformed Judiciary. We have an Independent Electoral and Boundaries Commission- though doubts are now emerging at how Independent the Commission is. We have a reforming Police Force and some semblance of order is slowly creeping in.

Kenyans want order and Kenyans came out in large numbers to cast their votes. We were all resigned to either having you as our President or Uhuru Kenyatta. The rest were simply in queue. It was hence shocking when Kenyans were once more confronted by the ghosts of the defunct Electoral Commission of Kenya at tallying point at Bomas of Kenya.

Remember, you were robbed of victory the same way in 2007 at the Kenyatta International Conference Centre. What lessons did you learn then and what measures did you and your team put in place to avoid similar situations ever happening again?

I bet your top team slept on the job as Kenyans voted for you. We must ask hard questions even as we seek justice and restoration or a Re-run. You were let down by your immediate team members- people who were fighting for election contracts instead of election victory.

Again, how come your team members were campaigning for Round 2? Did they imagine that Round 2 could even not be there? I have never seen people campaigning to be number 2 in my life. Elections are won by number 1s all over the world.

Then, the Team assumed some misplaced sense of self importance to an extent that they never answered their phones, they never called back and they never even responded to email and sms. The only person who did engage with the public and even responded to his calls and sms was Hon Prof Anyang’ Nyong’o.

Many people who voted for you are annoyed beyond words. We are being consoled to seek Justice but the truth of the matter lies somewhere else. We did our duty and voted for you. Your Strategic Team members failed to guard and protect your votes and now, they want to gag us as we point these mistakes! Your Team made mistakes and even as we walk firmly in solidarity with you, we must tell them as much.

I would like to be told of what strategic importance was having Hon Otieno Kajwang as Minister for ID Cards and Hon James Orengo as Minsiter for Land? The duo failed in their respective portfolios and because they never listened to any wise counsel, let the counsel of public opinion deal with them.

Lastly, if the Strategic Team around Raila failed to see your votes going in 2007, and again in 2013, how sure are we that they will do a good job in 60 days if the Courts grants them their wish.

The time of reckoning is here and now with us. You must not go far to look for people who failed your campaign. They are all around you- kikulacho ki nguoni mwako.

But if a re-run is so ordered, we must all take up our formation and campaign for you as Kenyans without regard to your Strategic Team Members.

All the best as you confront Dr Willy Mutunga at our reformed Judiciary. I will be penning him my thoughts tomorrow.

Odhiambo T Oketch, is the Executive Director of The Clean Africa Campaign- TCAC Nairobi Kenya, an initiative of KCDN Kenya