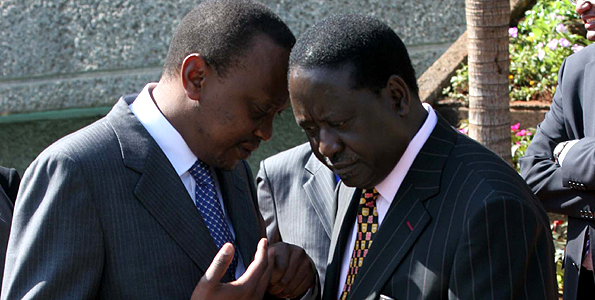 â€œBaba, while you were awayâ€!
By William Makora
Though it short-lived, this dictum rent the air in Kenya and internet with a truly free airspace. People enjoyed it across the board, lovers and haters of the former Prime Minister and Leader of Coalition of Reform and Democracy, Raila Omolo Odinga saying or humming it with a smile. It was like a funny lyrical part of a mysterious song or simply a popular phrase of a mysterious man. The public, both young and old, found in it chide for any boredom. â€˜Babaâ€™ who was away in US was reuniting with his opposition backyard and the government had a duty to read the banner and/or note it down in the book of national memories! In a biography he calls himself â€˜enigma of kenyanÂ politicsâ€™.

â€˜Babaâ€™ is a Swahili word for father; that is the blood male parent. Though Swahilis are people of east coast of Africa, the â€˜ba-baâ€™ tongue is synonymous with babies training their tongues on words across African landscapes. Like â€˜ma-maâ€™ for mother, only accents differ slightly in many backgrounds.

Apart from the paternal use of â€˜babaâ€™ in African family set ups, Christians apply it for God or Pope, the Holy Father of the Catholics. To God and Pope, the people kneel and do their obeisance in hope of divine favors. The kind of â€˜Babaâ€™ Raila is or will become to the people of this nation and/or beyond is not yet clear.

If there is one single Kenyan who enjoys mammoth public support then that person comes miles behind Raila, currently fondly referred to as â€˜Babaâ€™, an epithet only shared with Moi in the history of this republic. Moi was the president of Kenya when particular politicians chose to call him baba. However their calls were more obsequious and unreal. The founding father, the late Jomo Kenyatta, was referred to as â€˜Mzeeâ€™, a respectful way of recognizing his age and/or position.

Before the wider Kenyan constituency got lighted by the â€˜Babaâ€™ light, the fire burned people of his Nyanza backyard for quite some time. They solemnly easily called him in a way that more-or-less deified other than paternalized him. Now that, not only opposition leadership but also leaders in the government, like the Deputy President William Samoei Kipchirchir arap Ruto, rap it everyday everywhere, it is no longer remote in sense; it is a popular tag, a stature and a title; one higher than presidency. It is a value Raila would share with the people in a way that does not only invest it but sows it into an everlasting soil of living souls of emerging generations. It is up to Raila to know how make use of it.

Sounds of wish or hope?

When Raila left Kenya for vacation in the US in March 2014 not many Kenya seemed to note it. It was when he was away that the people realized the gap he left. The gap, length of time and silence let pangs of solitude that, like rainfalls, poured upon the masses with torrents of anxieties. The people were missing something. The people were missing somebody. Like â€˜destituteâ€™ that would soon reunite with a long gone father, they were agitated. When was â€˜Babaâ€™ coming back home?!

When Raila finally stepped onto the home soil, the cry grew so loud that he seemed to loose touch with reality. The people had told him all their predicaments and needs. They had told him the likes and dislikes of their trite. They hoped he would share his side of heaven. Or may be they wished he knew they expected it, leave alone them giving it! â€œBaba, now you are here â€¦!â€

It would be a disappointment that babaâ€™s return home and babaâ€™s stay away are identical sisters. Or worse still; that it stirs the boil more! If the people of far lands gave baba some food he should be fatherly enough to share it out with the children. If baba squanders all the food on high tables without seeing needs round about him disaster will come calling into his own house. That will be the saddest part of an exciting man’s story.

Let him who has ears hear the voice of the calling one!

(Please donâ€™t miss the next article: Raila, the Charmer. It is a broad analysis of chances Raila Odinga has in politics against Uhuru Kenyatta. â€œArrogance is the name of the driver in the shadow of Ruto.â€)