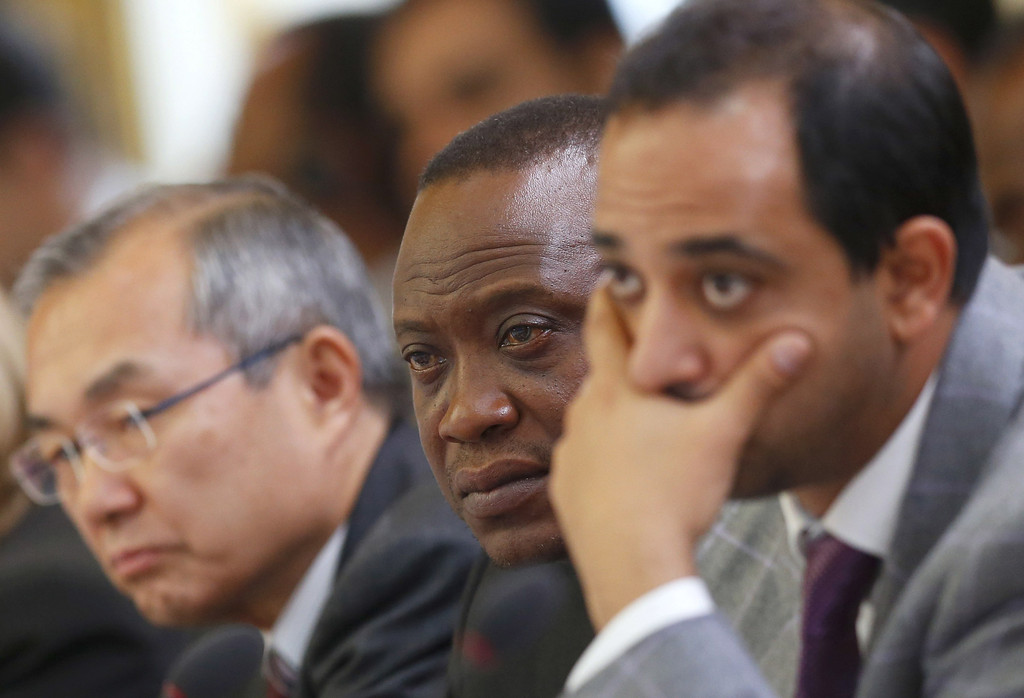 Photo: President Uhuru listening to a presentation duringÂ  the Somali Conference in London earlier this week.

KENYA AND THE WEST: REVISITING THE OUKO-MOI STORY AFTER TWO DECADES
Kenya under Moi forms an integral study in history and civic books in secondary schools in Kenya. While attending these history classes not so long ago, an interesting bit emerged on the Moi-Ouko strained relations after attending some international conference. I do not clearly recall whether this bit was in the book or it was a myth advanced by the adult Luos I constantly interacted with as I grew up.

However, the story goes that when they came back home, the then foreign minister rued the events abroad. As we grew up, we picked it that Robert Ouko had surely been killed by Moiâ€™s men. Whatever the statement meant remained heavy in the hearts of the adults. I was too young; I could not decipher it all.

As the international events surrounding the London trip by our new President keep streaming home, with its implications on diplomacy, sovereignty and party politics weighed in the usual partisan fault-lines of Jubilee Alliance and CORD Coalition, I recalled the Ouko-Moi story.
I detoured to this story to admire the political freedom today. I went back in time to appreciate the progress today. I recalled this past to give me a standing point for the present and the future. While I was lost in the politics of that era, I shuddered at what Moi handlers would have done had he been the Uhuru in London a few days ago.

With real time gadgets which relay instant history by eyewitnesses, and technology which has reduced distance and bent speed and time, I wondered what Moi would have done to contain a chattering citizenry with authority on all events. It startled me what his Special Branch would have done with the silly university student writing this piece. I am lucky it is another decade!

It did not take long before some quarters begun raising doubts, and the doubting Thomases begun demanding for physical evidence. â€œwhere are the photos?â€, then a photo emerged, then the doubting Thomases claimed it was photo-shopped, and the circus continued until it was overtaken by a chilling eulogy of a grandson who told the world his grandfather was a hero (despite the little Viagra matter) and that he lived in him (another growing womanizer?) and would be like him (a bright lawyer).

In the Moi-Ouko story, the bone of contention was the perceived mistreatment of Moi in contrast to the warm welcome of Ouko. As to whether this had to do with the personalities of the two leaders or the â€˜contactsâ€™ that each had made in the West is difficult to tell. As I said earlier, I was too young to decipher all of these.
Kenyattaâ€™s visit to London came hot after a highly publicized (not in the mainstream media) visit by his former political competitor, Raila Odinga. The political expectation was that he being the sitting president, his presence in London would have been felt deep in the hamlets of Kanyidoto and Kabuoch in Ndhiwa Constituency. His visit ought to have straightened all the drunken men in beer dens in Karatina and formed an AOB item in the AGM of a Â Murangâ€™a Sacco.

In our famed entrepreneurial habits, framed images of the two leaders, as they discussed â€˜a host of bilateral issuesâ€™, ought to have been selling in downtown Nairobi. On twitter and Facebook, including in the presidentâ€™s page and that of statehouse, these images would have been worth a million political words!

The visit of Kenyatta failed to be a diplomacy coup at home. Truth be told, the burial and funeral of Mutula could have struggled to gain coverage because of media reviews of the presidentâ€™s visit. It was an embarrassment. What disturbs even more is that the cabinet nominee for foreign affairs was not questioned convincingly on the foreign policy Kenya should pursue in view of these shifting geopolitics on the global stage.

Be it as it may, Kenya is moving on. Looking at a past when such humiliation of a Kenyan head of state would have been a matter of life and death for his opponents, the Kenya we live in today is such that the two leaders went ahead to share a podium in a funeral! This is what I call progress.

Even more poignant is the fact that none is blaming the other for the fiasco in London. Because Moi is still alive, events such as these must be deeply traumatizing. https://www.kenya-today.com/opinion/president-uhuru-kenyattas-london-visit

Hail! The new republic is come!