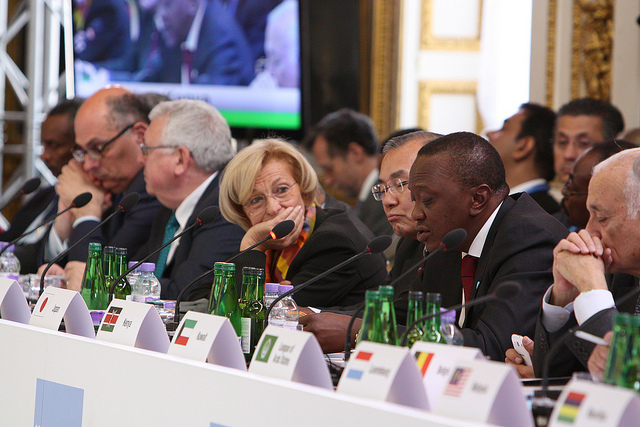 By Ibrahim Kosgey in London

Contrary to how it has been widely reported by the Presidential Press Services, NTV, Capital Fm and other local media in Kenya that President Uhuru Kenyatta held bilateral talks with his UK counterpart David Cameron, there is no known record of any such meeting having occurred.

The Presidentâ€™s movements were restricted to the confines of Â his hotel at Inter-Continental Park Lane and Lancaster House just a few Kilometers away from the venue of theÂ Â  Somalia conference which he was attending; conspicuously present beside him throughout and even inside his presidential limousine were MI5 security agents.

This was a huge PR disaster in the part of the UK government that will come back to haunt them and it wonâ€™t be a surprise if and when their High Commissioner in Nairobi is summoned by the Presidentâ€™s men.

If it were apparent that the management of the â€˜essential contactâ€™ policy was going to demean and totally humiliate a sitting head of state to the extent that happened, both parties should have withdrawn from the trip. But then again, it was reported elsewhere that Nairobi pushed for the president’s invitation and all London did was to live to their word “essential contact”

For three days Kenyans did not see or hear from their President who was supposedly elected through a credible, free, fair and internationally approved process. Â Even when it came to meeting Kenyan migrant community in the UK as their new President, he had to do so in Â Â hall concealed through a side entrance of Â his restricted Â hotel boundaries Â that left more people thronged outside than the Â hundreds Â that were squeezed in.

When it came to the conference, Uhuruâ€™s name was never mentioned even as he was left to observe and listens speeches by different speakers like Somaliaâ€™s Deputy Prime Minister which were choreographed to major on crimes against humanity and Impunity.

This must have been difficult and precarious for the president to take considering he has one of the largest forces in AMISOM, 5000 strong soldiers that were late last year attributed with the success of rooting out Alshabab in Kismayu.

Analysts view the â€˜London Trip Fiascoâ€™ as a possible recipe for a gigantic problem, the sowing-of-seeds of huge mistrust between Museveni,Uhuru and The West regarding the role of ICC court in Africa.

The timing of ICC allowing the chief prosecutor Fataou BensudaÂ  to amend the charges against Uhuru on the backdrop of theÂ  embarrassing â€˜London Trip Fiascoâ€™ thatÂ  seem to have Â doubled the levels of mistrustÂ  indeed throws another spanner in the works.

Ugandaâ€™s President Yoweri Museveni, an outright critic of the ICC court and who was ironically subjected to similar humiliating treatment during the Somalia Conference; may definitely urge Uhuru and his deputy to abandon the ICC process altogether.https://www.kenya-today.com/opinion/president-uhuru-kenyatta-yoweri-musevini-london-humiliationÂ