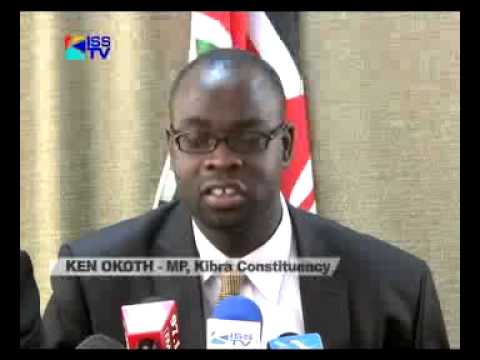 By Phil Wesonga
Intelligence reaching us suggests that Hon Ken Okoth the MP for Kibra, who was last seen holding night meetings with TNA Chairman Johnson Sakaja, will this Wednesday be hosting top TNA government officials led by President Uhuru, CS Anne Waiguru, amongst others in a visit clouded in mystery.

The president will visit Kibra (the first such visit by any president in more than a decade) ostensibly to launch a youth empowerment program. What baffles is that although the head of state does open the Nairobi International Fair adjacent to the constituency each year, he avoids the heavily potholed Kibera drive and uses Ngong Road.

As any Kibra resident will tell you, Kibera drive is in deplorable condition and remains the only tarmacked main road in the constituency in 50 years although this is home to nearly a third of Nairobiâ€™s tax paying population. Uhuru opens the his second such trade fair in a few weeks. Observers are quick to is read mischief into the visit which is deemed as a plot to undermine CORD leader Raila Odinga by undercutting his influence in the area that forms the bedrock of his support in city politics.

President Uhuru Kenyatta has in recent weeks faced immense political pressure from Okoa Kenya referendum initiative which is led by the opposition leader Raila Odinga. The diabolical plot involves Devolution CS Anne Waiguru and her PS Peter Mangiti whom the Okoth and Sakaja have roped-in in an attempt to give the function an artificial flavour of a national government development program. Of course, the Nairobi Governor shall not be left behind and will be dutifully escorting President Uhuru to the venue.

Informed observers of the Nairobi County political scene, and Kibra constituency in particular, are hardly surprised by the news that the Head of State will be visiting the politically volatile constituency. Eyebrows have been raised by the noctural activities of Homa Bay Women Rep Hon Gladys Wanga who has spent the better part of the last few nights mobilizing women MCAâ€™s from Kibra to attend a preparations meeting at the ministry headquarters ahead of the state visit. â€œmobilisingâ€ What makes the visit suspect is that the Kibra DO is unware of the visit just two days to the event.

Local leaders are also unaware of the visit which is being organised by the MP with a few ODM colleagues in utmost secrecy. Interestingly, while the host was heckled and booed by local residents in the presence of Raila Odinga last week, President Uhuru was facing a similar fate in Migori County also an opposition stronghold.

A Nairobi management consultant Eliud Owalo has taken the local politics by storm after making a public declaration that he will be seeking to replace the current MP in the forthcoming general elections. A known ODM loyalist, the fearless Owalo has in the space of a few months managed to bring together various special interest groups and organized them into SACCOS for purposes of launching sustainable income generating projects for the thousands of jobless youth in the expansive Kibra informal settlement. Last week, Owalo received a frenzied reception when he and CORD leader Raila Odinga organized an Okoa Kenya signatures collection event, with youth carrying placards and in support of Owalo and Raila, and chanting urging him to take over the vacant CDF office at the DOâ€™s office.

Back to the presidential visit; youth empowerment program you say? Out of the more than 4,000 National Youth Service ( NYS) recent recruits, only about three were from Kibra. A clear indication that majority are recruited from elsewhere. The same highly discriminative recruitment formula applies to police, KDF, KWS and KFS ranger recruitment where the constituency hardly features in those joining up the uniformed services. The uptake rates of regarding Youth AGPO and the Youth/Women/Uwezo Funds by Kibra residents remain critically low and it is not because there are no individual and group applications for these opportunities by Jubilee government.

Some residents intimate that there is favouritism in approving their applications. The situation is compounded by high rate of joblessness in the area leading to an upsurge in crime. Recently tens of vegetable hawkers and car wash vendors â€“ most of whom are youthful diehard supporters of CORD leader Raila Odinga â€“ were violently evicted from their business premises along Kibera drive on the fence of Moi Nairobi Girls School and given no alternative venue to relocate to. Last year, President Uhuru was forced to cancel a visit to the area to give title deeds to the Nubian community.

Residents held demonstrations against their MP and Lands CS Charity Ngilu whom their accused of conspiring to defraud them of the right to be allocated land as long-term residents of the area. With development space running out of the city, grabbers are salivating at the prospect of titles from the land on which Kibra sits, now estimated to be worth between Kshs60 â€“ 120 billion.

Rumours are that 60% of the land has already been allocated to Chinese developers who will be coming to Kibera to build hundreds of housing units to be sold to the public later at a handsome profit. One wonders why the local MP would fail to inform, nay include former MP Raila Odinga, any plans for any development project given Hon Odinga is a former MP of the area who started many government and philanthropic projects in the area some of which benefit the residents to this day.