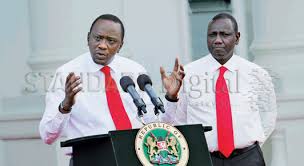 There is a big assumption in this Jubilee government that similar things are the same. This big assumption takes a dangerous traction especially among its supporters; many of whom believe this government was cobbled up in heaven and released downwards for the sons of men. In their statements, this government has full recognition from â€˜importantâ€™ local deities and divinities and that in the fullness of time; it will be the most perfect government under the moon, the sun, the stars and the rainbow.

So far, it has achieved the following: put statehouse on facebook and tweeter, brought two former election losers to head parliament and senate, attended a number of churches, attended one burial, named one-eighth of cabinet and talked to Ethiopian Prime Minister.

As the elected Excellencies were engaged in such important mentioned activities; their spousal counterparts went in a long shopping spree. They bought their husbands-excellencies same shirts, trousers, boxers, vests, socks, handkerchiefs (just in case Ruto decides to weep again), belts, shoes et al. Never before in Kenya has two women, done so much, for so little, to create plastic similarities for two very dissimilar men. Ruto cries; Uhuru does not. Ruto spends more minutes explaining nothing; Uhuru spends no minute to explain anything.

In their public pronouncements: Ruto wants Jubilee to run a government, Uhuru wants Jubilee to run a Country. Ruto may not care what Uhuru thinks, Uhuru must care what the country thinks. He is the head of state. Even in their non-verbal communication; Uhuru reveals more tension within than Ruto, yet, interestingly, Ruto breaks down faster than Uhuru. A â€˜dynamic duoâ€™ indeed!

So in the last two days, we have been treated to presidential uniforms. But how do you buy uniforms without books? You take eighteen subjects but buys only four books! Arenâ€™t such pupils good for punishment?

In the primary schools where some of us got the drilling, what their Excellencies have done would have invited several strokes of the cane and thorough grass slashing to do. You see, the media do not want to punish the government they put in place; the opposition in parliament is rudderless and 5.4 million CORDlings still feel this is not their government while the other 6 million are nuts and crackpots difficult to engage with for civic action.

There are instances when I miss Raila Odinga. It took Jakom a record one afternoon with President Kibaki at state lodge Sagana to move the country forward; not because he was offered all his wishes but because Mr Odinga understood that time is to politics what gravity was to Newton! A day in politics is a very long time. With the emergence of social media, where no one owns the breaking news and information belongs to everyone; yesterday could as well have been the first day of the Armageddon.

What the last two days has shown is that contrary to numerous publicity stunts and worthy shows of exuberance by their Excellencies since The Hague joined them together, the running of government is not a cozy affair. It is foregone conclusion that the erratic Ruto, if the allegations that he is indeed the stumbling block with his â€œtechnocrats onlyâ€ mantra is still engaging in campaign politics.

This brings me to the second instance where I miss Raila Odinga. In the cabinet after the formation of the Grand Coalition government; Mr Odinga was given shallow ministries and cobbled up departments to give to his half.

He took all the flesh in the ministerial bones and gave them to the Kalenjins and luhyas, the big two in Railaâ€™s support base.
He gave out Agriculture, Roads, Higher Education, Industrialization, Local Government, National Planning etc. He gave these ministries even when Luo Nyanza cried foul because he understood what reciprocity is in politics. Yet he too faced rebellion.
I have maintained that cabinet secretaries need not be wholly technocrats. That lot should be left for principal secretaries. Cabinet secretaries should be people who will help the president dangle the goodies of development he initiated during his term. What is the significance of Amb. Amina Mohamed in this regard? What is her constituency? Her people?

This is why he must bring back the rejected quadruple of Ongeri, Charity, Najib and Dzipapa. He may need them again.

Lastly, the president needs to have dashboards too, people like Kimunya whom the media could roast without reaching the presidency because it would be a sad day for Kenya if the person of the president will be accused of irregularly awarding tenders to some former campaign financiers from China. He needs someone to do his bidding!