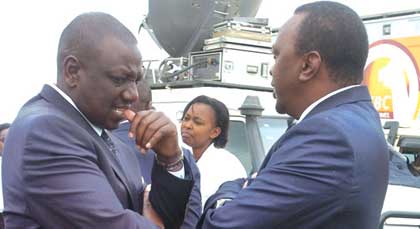 To scare the bird is not best way to catch it. When a President and his deputy talk with rancour at government critics before the eyes of the nation, it portrays them as weak and insecure. Indeed, itâ€™s also a poor show of leadership, disrespect to democracy and freedom of expression.

Portraying open anger over an idea or individual shows that you are totally robbed of your peace in private. You cannot kill dissent, or stifle freedom which is entrenched in our laws.

Leaders who get aggravated on every criticism leveled against their government are undemocratic, dictatorial and will make the citizens to feel like they have enemies of freedom controlling their national affairs.

How does the government expect the counties to develop without adequate revenue? Secondly, why are President Kenyatta and his deputy William Ruto scared of referendum costs when itâ€™s the tax payers who will foot the costs which in the long run, will benefit all sundry?

Just recently, the deputy President spent a whooping Sh100 million to hire a luxury jet for his trip abroad. Besides, the Presidentâ€™s recent trips to Russia and China, with a bloated delegation of 60 people will soon send the tax payers gasping. I therefore disqualify the governmentâ€™s argument on referendum costs.
While those agitating for a referendum are accused of playing the political card, the government needs to remember that governors and Senators are political leaders elected to safeguard the interests of the 47 County governments as focal points for socio economic development.

Times are over when the Central government in Nairobi used to determine which road, school or hospital should be constructed where and when.

We don’t want county governments to beg the President or his deputy for development money which in fact belongs to the tax payers. That is why, even if there was an agreement to increase funding to the Counties, a referendum will be necessary to revise our law on devolution when the situation is conducive. This will help curb roadside declarations and buying political royalty by the executive.

Surely, if the end result of a referendum is to benefit the nation, why should it be seen as a score-card to a government less than 150 days in office?
Laws are not carved on stones. I remember former Prime Minister Raila Odinga, in the last referendum campaigns saying that any anomalies in the current constitution will be rectified; implying that although it was passed enmassee, itâ€™s not perfect and therefore can be revised as needed to accommodate the prevailing governance systems and practices.

The hard-line stand exhibited by the Central Government on the matter is a clear demonstration of trying to incapacitate the counties. The executive needs to be reminded that devolution is so popular that if you go against it, you will be riding an empty wagon! You canâ€™t win the argument even with much verbose.
And if itâ€™s too soon to subject Kenyans to another contest six months after the last election, let the Jubilee government increase funding to the Counties and negotiate the right timeline for the referendum when the changes will be legally anchored in the constitution.

Iâ€™m sure the Senate, County governments and the political opposition is more than willing to dialogue on the matter. This inclusive approach will thaw mistrust and political animosity which has characterized the referendum debate in the Country.

Portraying arrogance like the one from the URP Party to discipline Governor Ruto as portrayed by former Speaker Francis Kaparo, cannot scale down the clamour to change the law on devolution. Kaparo should be at the frontline to apply his experience in advising the executive instead of adding fuel into the fire o the referendum.

On the other hand, President Uhuru and his deputy need to sober up and focus on serving the nation lest they break down. Their supporters also need to tone down their sycophantic arguments which do not hold any water.

The more persistent the Government gets to halt the clamour for a referendum, the more they are exposing their true colours as enemies of constitutional implementation. Silence to criticism should be the best sheep home for Uhuru and Ruto. Mentioning Raila or Cord in all their public functions shows how they fear the opposition.

My best advice to our CEO and deputy is this, you can force people to obey you in a dictatorship but you cannot make them love you. Encouragingly, Kenya isn’t a dictatorship, and therefore, citizens have a right to criticize or hold leaders to account for their actions. In the current global order, if you hate criticism, go private and lead your life and enjoy.

However, since our two leaders accepted the challenge of lead Kenya, let them wear a thick skin like President Obama; who for the last 6 years has never seen a kind word from his political opponents. In fact, Obama does not respond. He operates freely like nothing is happening.

This is a strength Uhuru and Ruto should borrow to enjoy their leadership and deliver services to the Kenyan people before the end of their 5 years term.
We want spurred growth- better infrastructure and improved standard of living in the whole nation. Full implementation of devolution will be a recipe to spur regional development and liquidate historical discriminatory practices in the Country since independence.

Those against devolution are enemies to the counties like Samburu, Turkana, Pokot and Garissa. Otherwise, the quest for more funding for the Counties is not a Jubilee or Cord affair but a Kenyan one.

It must be remembered that there is still a red flag on the President’s commitment to devolution following the assenting of the revenue allocation bill into law, and whose interpretation is pending in the Supreme Court after a petition was lodged seeking legal opinion on the bill.

Secondly, it must also be remembered that the deputy President campaigned all over the nation with red cards against the current constitution and therefore, it does not surprise any Kenyan when he is fighting tooth and nail to nail Isaac Rutto, the key architect of devolution.

To read more of Lister Nyaringo’s views and Opinion follow this link to his blog.