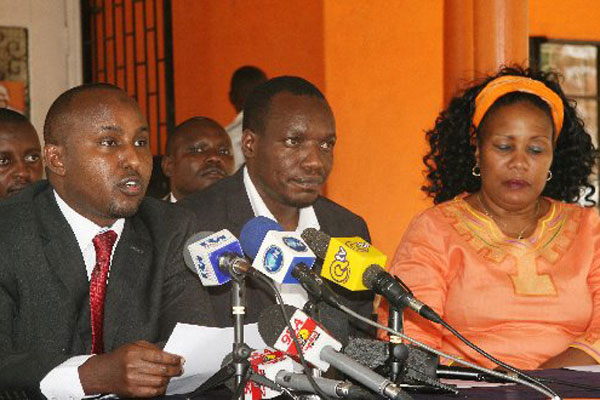 Ever since Kimani Ngunjiriâ€™s beastly bite sentenced hon. Simba â€˜Alertâ€™ Arati to a one week stay at the hospital ward, I have been pondering unending questions on the gravity of shortcomings suffered by our President. I am convinced that he should take responsibility or just take a sit because he has proved naÃ¯ve and politically adolescent to lead this country.

Once upon a time, my people from Gusiiland â€“ the land of the arrogant â€“ once chronicled that â€œCharacter is like a pregnancy that cannot be concealedâ€ In this respect, Bahati Member of Parliament Hon. Kimani Ngunjiri has always headlined news for unenthusiastic reasons.

Regrettably, Ngunjiri once affronted and sexually assaulted a poor traffic police woman in Nakuru and got away with it unpunished. Just recently inside Parliament, the beast bloodthirstily gnawed the finger of Dagoreti North MP Hon. Simba Arati. The intensity of infection he inflicted on Hon. Arati cannot be underestimated whatsoever.

Interestingly, these are the type of people who the President Kenyatta calls advisers. He is surrounding himself with political associates with weird and corrupt tendencies. Kenyattaâ€™s Kakistocratic system of governance has attracted a lot of criticisms over acclaim. He has held hostage the legislature and it can no longer perform its duties independently.

Needless to say, our parliament has been preposterously put under siege by the executive. Godfatherism has taken roots in our parliament. The incumbents are dancing to the tunes of their godfather â€“ the executive. They have become ignorant puppets in the hands of their puppeteer. As we speak now, all hell is set to be let loose. The godfather and his puppeteers are bastardizing and chastising the opposition at every available opportunity.

After passing the draconian law that will enable Uhuru to jail his political detractors, the political atmosphere in Kenya has been rendered a do-or-die mantra. It has reached a juncture where people will go back to the streets and demand back their hard-earned-deprived freedom.

Ultimately, it beggars belief that the Jubilee legislators are crying foul over the bucket of milk that they spilt themselves. If not, how then do they have moral rights to play victims, accusing the opposition of causing disorder in the house during the unlawful passing of the draconian bill into law? Anyway, as Freud once quoted “Men are more moral than they think, and far more immoral that they can imagine.”