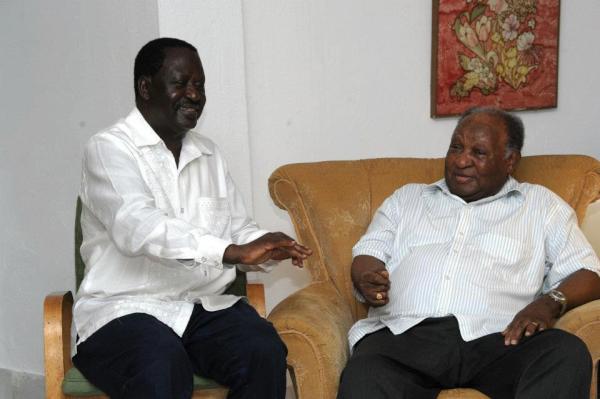 Photo: Kenya’s popular politicians Kenneth Matiba and Raila Odinga who led from the front in the struggle for political change

By Patrick Gathara via Gathara’s World

The problem with revolutions, is that they tend to go round in circles. Over the last half-century, Kenya has seemed to undergo its own slow-motion revolution. We have gone from an oppressive and extractive colonial state, through a repressed one-party dictatorship to a relatively open, somewhat prospering, pseudo-democracy.
Two years ago, we made the crowning achievement -for the second time in our history, we had a new constitution.Yet, it is still easy to despair with Kenya. We still have pretty much the same crooked politicians, the same corrupt and brutal police, a judiciary that despite “radical surgery,” struggles with the concept of justice. Poverty and disease and ignorance and violence are still running amok. A lot of times it just feels like we are aboard a change merry-go-round.
The more we change things, the more they remain the same. After twenty years of reform, we seem to have to have ended up right back where we started. We created new constitutional arrangements but, at its core, the country didn’t change.It remains very much the product of the colonial past. As the Truth, Justice and Reconciliation Commission reminded us this week, the colonial state was never dismantled. We simply exchanged one bunch of oppressors for another.
The relationship between the powerful and the people remains one based on exploitation, not the platitudes of service we are treated to every day. It is still very much a country that defines success in terms of the fortunes of its government, not those of its citizens.Our first attemptÂ at independenceÂ to pour the new constitutional wine into the old wineskins of the of this colonial edifice did not result in the bursting of the latter. Rather, it was the constitution that was extensively mangled, spawning decades of political, economic and social crises.It’s a lesson we should have learnt by now. Our legalistic approach to all kinds of social problems has not worked. The alcoholism ravaging our communities has not been assuaged by passing laws on opening hours. Ever more copious layers of legislation have not brought order to our roads and illegal drugs are still easily available. Since we do not bother addressing the underlying reasons for destructive behaviour, new laws are either ignored or perverted and sometimes create even worse problems.

Similarly, changing constitutional arrangements without changing the nature of these understandings between citizens and those who exercise the authority of the state, and between the citizens themselves, is thus futile. As was the case 50 years ago, a new constitution will not automatically erase either the century-old practices and attitudes in institutions like the police, or the ingrained habits of those who consider themselves our lords and masters.

A new constitution is therefore insufficient to wring the change we desire. We now need to do the work that the independence generation failed to do. We need to engineer a rebirth of the nation. In a sense the real problem with Kenya was always that it’s full of Kenyans and to change that means refashioning the very idea of what it means to be Kenyan.

During the struggle for the second liberation, there was much talk of “the Kenya we want”. Not much was said about the the Kenyans we want. We must begin there. We could choose to inscribe the constitution on our hearts, to affirm the value of universal values of life, dignity, and liberty; to begin to measure our progress by the quality of life and opportunities enjoyed by our poorest citizens as opposed to that of our richest.

We cannot change the past but we can make our peace with it, and decide not to let it define us. And that’s why I think the TJRC report is so important. It is about releasing Kenyans from the shackles of the past and so freeing them to choose their future.Â It can be the start of a real national self-examination. If we have the courage to do this, then we can finally begin to learn from the mistakes of the past instead of being condemned to repeat them.