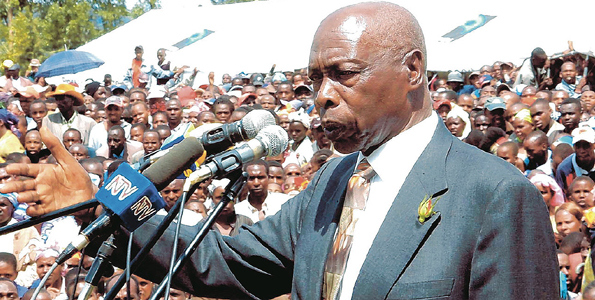 Are we doomed to become our parents? To repeat their mistakes and thus their history? In this year of Kenyaâ€™s Golden Jubilee, the parallels with the past are disturbing. A government appropriates the liberation fight and wastes little time undoing all its achievements; a new constitution threatened the very arguments that felled the independence constitution and, within a few years, put our fathers back on the path to dictatorship and penury.

A president who seems more interested in consolidating his own power than delivering on his campaign promises, who leads a superficial and fraying tribal coalition which papers over and heightens rather than resolves ethnic divisions.

â€œIf a factory is torn down but the rationality which produced it is left standing, then that rationality will simply produce another factory. If a revolution destroys a government, but the systematic patterns of thought that produced that government are left intact, then those patterns will repeat themselves,â€ wrote US philosopher Robert Pirsig, in his Zen and the Art of Motorcycle Maintenance.

In Kenya, we have tried everything except reform the â€œsystematic patterns of thoughtâ€ that generated the repressive and kleptocratic regimes of the last five decades, patterns of thought that find their genesis in the attitudes and divisions of the half century of colonial rule that preceded them.

Now this is not what it might sound like: blaming the past or the colonialists for our current predicament. It is actually an indictment of the independence generation which failed to substantially dismantle or reform the system of elitism predicated on ethnic and racial favoritism, the extraction and theft of resources from the native population and the concentration of power in the hands of a privileged few. It is an indictment of the current generation that is following in their footsteps, entrenching rather than overthrowing the system.

The late Donella Meadows, in Thinking in Systems – A Primer described a system as â€œa set of thingsâ€”people, cells, molecules, or whateverâ€”interconnected in such a way that they produce their own pattern of behavior over time,â€ and invited us to consider the implications of the idea that any system, to a large extent, causes its own behavior. It is the nature of Kenyaâ€™s democracy, the relationships between its various components â€“voters, rulers, police, soldiers, judges, journalists, media owners, businessmen, legislators, etc.- are what produce and reinforce the patterns of repression and inequality, of tribalism and corruption, ineptitude and poverty and marginalization, that we are so familiar with.

It is not about bad leaders versus good leaders. This we should have seen when we replaced the kelptocratic Moi administration with the cream of civil society and opposition politicians in 2003, only to end up with the same result. It is not about the stupidity of voters because, whether we vote in wise or corrupt leaders, the system will encourage them to be vain and corrupt, and will either reward them with riches when they do or condemn them to poverty, exile or worse when they donâ€™t.

Think of our roads. Any road user will testify to the frustrations of trying to abide by the rules in the chaotic environment that is our urban transport system. One suffers abuse for stopping at a red light or pedestrian crossing, risks death via mangling when insisting on oneâ€™s right of way, or arrest and interminable court delays if resisting the temptation to part with a few shillings when accused (justifiably or not) of wrong-doing. You get the idea. The entire system incentivizes bad behavior and punishes good habits. The result is reminiscent of the lines in Yeats’ poem, The Second Coming:

The ceremony of innocence is drowned;
The best lack all conviction, while the worst
Are full of passionate intensity.

It is thus unhelpful and unproductive to simply tell single actors -drivers, leaders, matatus, pedestrians, voters- to behave better. A similar case could be made for the folly of blaming the August fire at JKIA on a mere electrical wiring as if that explains why it was not put down when it was small or the pictures of military personnel fighting the blaze with buckets when it took over the whole terminal. And it provides no guarantees that a similar fire will not occur again. It is why me must insist on seeing the investigation report. Why it is important to understand what led up to and happened at Westgate. Remember Pirsig. If â€œthe systematic patterns of thought that produced that [situation] are left intact, then those patterns will repeat themselves.â€ Road safety, democracy, airports, security. All run on systems and unless these are fundamentally changed, they will continue to generate the same behavior.

So, if we want to reduce the carnage caused on our roads, by terrorists in our malls, by fires at our airports and by our own government across the land, we need to learn to look at the systems and patterns of thought that produce it. We need to get away from short-term, knee-jerk reactions to the latest affronts and think through the rules, attitudes and the incentives pervading the system. Then we can make changes that will produce and reinforce the behavior we wish to see in our pedestrians and drivers, managers and firefighters, police and intelligence agents, politicians and voters. And perhaps we can hope to prevent repeats of the past.