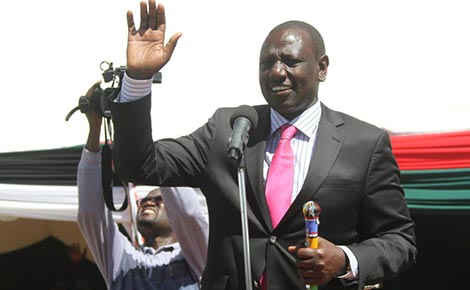 By Father Francis Monari
Your Excellency, Hon. Deputy President of the Republic of Kenya; Hon. William Samoei Ruto. You of great stamina and confidence; a man of all seasons, you have walked the hustler’s path and now rides in the trappings of glory and power. I write this to you with respect and great regard of your office and person. I recognize that I would be the least in the persons to whom you need to give a thought; however, I am of a strong conviction that all human beings have the same dignity and value despite their social status…forgive my childhood religion which has nurtured me to be whom I am.

Your Excellency, I write with a heavy heart following the recollection on a few recent encounters I have had with you through the media. I must admit that there are many times I have admired your oratory skills and the confidence you assuage making things look better through your eyes. I am still disturbed with the sentiments you recently made through your address to the nation after the Mandera Massacre of 28 persons. If you do not recall, I am bothered by your sentiments that “the KDF have pursued and killed 100 militants and destroyed the camps”. Your Excellency, am still waiting to get any facts on this but as my doubts kept gripping me, I think I am tending to trust them more if what I saw and now am going to say is anything to go by.

Your Excellency, I know that in times of sadness, pain and grief, we are moved by anger and may say things we do not even believe in. Today, Wednesday 3rd December 2014, on National TV (Citizen), you made a remark that has sent shock waves down my spine. You did say that “unfortunately, the 38 Kenyans who died had been warned earlier but they refused to leave”. This is the saddest experience in any nation. Is this an admission by the state that there is a deliberate way to allow or experiment with the execution of poor Kenyans? Was it a Freudian slip or a slip of the tongue? Do you know how much you gave out through that statement? In my view, you simply said to us – Kenyans that the GOVERNMENT KNEW AND SIMPLY LET HER PEOPLE BE MASSACRED? Your Excellency, is it correct that poor Kenyans eking a living are told to leave because hooligans are headed their way? Who is going to protect us poor voters who vote impunity and arrogance? Mr. DP, if the poor Kenyans continued working, was it impossible to get the GSU or Police or KDF to reconnoiter or create a buffer zone to protect those Kenyans?

As I mourn the young men and women of Kenya who I have shed tears for, prayed for and buried and those that am yet to be part of their send off; as I stand and hold the wailing families both in prayer and social support, I cant stop thinking aloud…where is the government we elected, the government of the hustlers and poor, the government of the vijanas? The two statements are the saddest and regrettable happenings in my history and Your Excellency, these would make you to honorably resign in any serious and digitalis-ed democracy like where Kenya is. I am not asking you to do this, but am begging you to honestly soul search and take a new approach to the reality of the security issues. Whatever happens, I still pray and know that God will stand with His poor.
God Bless our Government, God Bless Kenya.