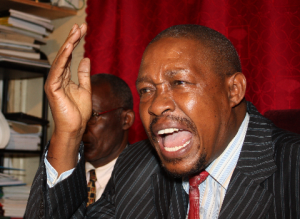 I can not by now recall the number of times I have had to introduce myself here in the United States of America. I used to begin with my university, but many could barely recall the name. Then I tried with my president but realised people only know an ICC suspect going by such a name; for a while, I cobbled up a connection between me with the “O” in the Obama name but Butler County in the State of Ohio (Birthplace of Aviation) is a Republican zone, I gave up. Nowadays, I just say what comes in my mind; often, I don’t.

Yet in the ongoing furore, there seems to exist only two groups – teachers and the ‘government’. The third, parents; are watching from the side, too complacent to join in. The fourth, the media, is part of the government. The fifth, religious organizations, are so pious that their work currently is to ‘bless God chosen’ leaders in this Jubilee year. The sixth, civil society activists, have been out in the streets for enough times to take care of ‘donor accountability’ that the teachers strike is no longer an important ‘pretentious’ issue to ‘dramatize’ on.

Does this teachers strike have something to show of the level of parental engagement in the education of their children?

I do not know what the results are on your side, but from here; I see a direct correlation between the disgustingly ‘removed’ attitude of the parents to the continued standstill; and, the level of education within these parents capable of arousing enough self-efficacy to respond to have a voice on the issue. Many parents, already financially stunted, are intellectually retarded as to comprehend the deathtrap that the whole education system in Kenya is. Many of them are by-products of the same stinking system.

In parents silence is another issue: the vulgarities of representative democracy. All interests in Kenya have some form of representation. We no longer Â have direct democracy. No one-on-one with important issues. Even on questions of fundamental rights, the Kenyan society is too detached to demand answers, too peaceful to raise their voices, too obedient to break unjust laws. . .and too busy to even realize shit is happening.

Teachers have KNUT, the government has TSC, parents have PTA, headteachers have KEPHSA! Headteachers are not teachers! All these interests, in good times, meet in another outfit called BOG. In the end, the whole system is full of structures and bureaucracies which make it impotent in the holiest hours of need.

You see, pupils who were in class when the agreement which now is the subject of teachers strike are probably the teachers in the streets. The programme then was to teach ‘discipline’, ‘obedience’, ‘service’, ‘hard work’, blah blah blah! Yet no level of education has an impact more than the primary level.

Most parents whose children are taught by the striking teachers belong to the income level of these teachers. In fact, some are even poorer. Not long ago in most villages, it was teachers who could drink “ten o’clock tea” with “bread”. Teachers were the people who could afford ‘thermos’ when the village was still stuck with the metal kettle-the ‘birika’-to cool tea. Teachers were not just “people”.

This strike illustrates the silent but enduring schism between teachers and parents. Truth be told, teachers ‘steal’ from parents all the time! Tuition fee, exam fee, caution money, activity fee, remedial classes, school bus projects, school water projects, maintenance funds, etc. All year end, parents have been the biggest casualties of the robbery by teachers. It is sad, but then, it is the truth!

A tired friend of mine still around March 4 told me that 90% of former IEBC clerks, deputy presiding officers and presiding officers where teachers! In his view, it is teachers who actually aided in rigging elections at the voting, counting and tallying level.

Dikembe Disembe is a socio-political commentator and currently on a civic exchange academic programme at Miami University, USA.