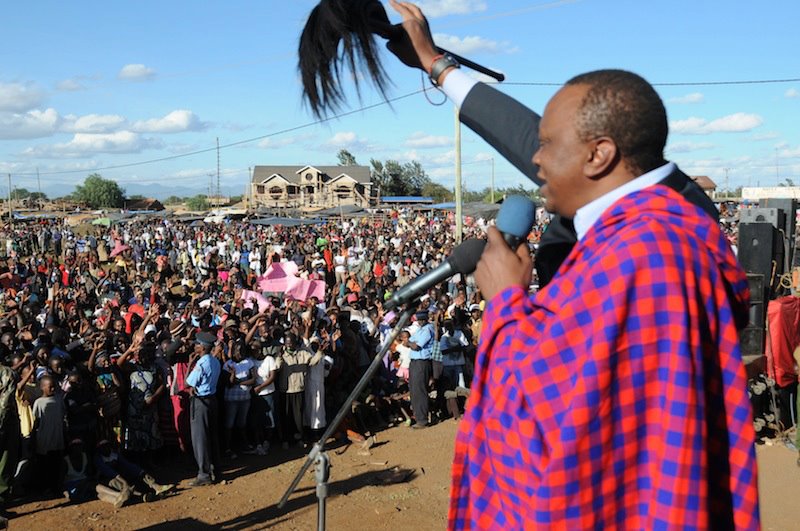 The emerging political groupings are reshaping the political terrain to a point of making it clear that it will indeed be a two horse race as once predicted by ODM leader Raila Odinga.

Opinion polls have confirmed that the race is between Prime Minister Raila Odinga and his Deputy Uhuru Kenyatta running on ODM and TNA respectively.

That means that an Uhuru presidency is a huge possibility, in the event the courts clear him to run for office.

However, Uhuru has a case that is still pending at the International Criminal Court, in the Hague Netherlands. With this in mind, this article intends to break it down into what an Uhuru Presidency would mean for Kenya.

Even though hon. William Ruto does not feature highly in the polls, he would also expose Kenya to a similar predicament, but given his opinion poll performance, his chances of clinching the presidency seem remote, at least for now.

It is also important for us Kenyans to ponder about the implications of threats of sanctions by the United States of America. A few weeks ago, USA secretary of state Hillary Clinton while in Nairobi intimated that Washington could impose sanctions were any of the ICC suspects to be elected president.

Whether the imposition of sanctions would be a fair move is not important, the fact is that â€œuncle Samâ€ said it will happen.

Thereâ€™s not a time they threatened any country from Zimbabwe to Cuba to Iran to North Korea sanctions and it failed to happen. Iran is the latest country to be relegated to a basket case, only last week thousands of Iranians were on the streets protesting the harsh effects of the USA led sanctions.

For this we like shouting back that â€œooh! Kenya is a sovereign nation that should be left to chart her own courseâ€. Fine!Â  Let us also respect the US when it charts its own course! They have their country, and we have ours.

Just as much as Kenya has its sovereignty which I would hope is respected, I also find it prudent to respect the US when it pursues its interest consistent with its desire to take the decision it considers the most â€œmorally soundâ€. Itâ€™s their call, just like we have our call that we will exercise in the 2013 polls.

Before I delve into the next part, and to avoid any contradiction, I wish to reiterate that The ICC suspects are innocent unless proven otherwise.

Let us also be in agreement that Kenya is a sovereign nation that should be left to chart its political direction. Â So donâ€™t fight me back with this line. Itâ€™s out of the question. Now find a more concrete way of responding to this.

Also, it is my conviction that, whether Uhuru or Ruto are on the ballot is a non-issue, what is at stake- and this is what Kenyans need to be civic-educated on- are the consequences of what their presidencies would portend.

Elections do have consequences. And I like citing The 1928 US election which paved way to Herbert Hoover- the 31st US president- and his presidency culminated in the well documented Great Depression era of the 1930s.

Hooverâ€™s went down as the most economically disastrous presidency in the 20th Century USA Presidential History.

However, in the Kenyan case, and as we shall see later on in this article, we have the privilege of predictability- we can predict unlike the people that elected Herbert Hoover.

It is within our power to change the course of our beloved nationâ€™s future.Â  We can choose the path to economic annihilation and obliteration or decide to play it safe with â€œanything but sanctionsâ€.

The March 2013 elections are about taking Kenya the Singapore way, or the Zimbambwe way.

Itâ€™s about making sure that Kenya goes the South Korea way, and not the North Korea way.

2013 presents Kenyans with a stark choice between a prosperous nation versus a failed state.

The choices in the coming elections are stark, like day and night, itâ€™s about Sanctions versus staying the course towards the Vision 2030.

Itâ€™s your choice to ensure that the Vision 2030 dream doesnâ€™t end up like the numerous receding policy mirages that have continued to dog this beloved country that the forbears bequeathed unto us.

Because letâ€™s face it, going by Clinton’s warning, take it or leave it, sanctions are effectively a horse in this 2013 race.

And when sanctions are on the ballot, every Kenyan too gets on the ballot, because it becomes a matter of everyone for himself, God for us all- say after me- â€œI AM ON MY OWNâ€. Call me selfish, but if my fate is on the ballot- am not stupid- I would take a decision that saves me a calamity.

Thatâ€™s the horrible circumstance that Clintonâ€™s pronouncement predisposes us to. But the truth is what it is, she said it, and from history, when they warn, it happens.

If Clinton is to be believed, a vote for either Uhuru or Ruto would be a â€œvote for sanctionsâ€.

What I mean is that say UK makes it to the second round; it will be â€œSanctions versus Xâ€ (the other person).

The choice is yours. You can only blame yourself for making the wrong choice- the choice is very clear, like Obama calls it between day and night.

With sanctions as one of the horses, March 2013 is about every Kenyan for himself, God for us all. And like I have said, you- every single Kenyan- will be on that ballot and I would recommend that you vote for yourself.

We will be going into an exam room with a leakage- to sit for an exam whose answers we have seen beforehand.

And I wonâ€™t give you the answer to this one, but between Sanctions versus Kingwa Kamencu, any time, I would pick the latter. It boils down to anybody but sanctions.

Kenyaâ€™s US$ 65b is so tiny an economy, compared to like Iranâ€™s which was $200b Â Â before sanctions, and in that case, Kenya cannot afford sanctions and as a consequence, it stands to be obliterated by a sanctioned presidency.

The small size means that the wiggle room is so narrow, especially in view of what we saw happen to the economy during the stint of the Post Election violence.

Very few generations in history, have gotten the opportunity to predict disastrous futures of their time with 100% certainty.

Like Sunday comes after Saturday, and based on Clintonâ€™s pronouncements, we can predict with accuracy that Sanctions induced calamity is a horse in this election.

Truth be told that a Kenyatta or a Ruto presidency would be a disaster that is predictable but within our reach to mitigate.

I chose to communicate this in very simple and easy to comprehend language- I can feel – itâ€™s a very weighty calling; I want everyone to understand, with unambiguous clarity- donâ€™t say I didnâ€™t tell you.

This is those articles you write as a matter of duty and love for your motherland. A nation where Pio Gama Pinto, Tom Mboya, J.M. Kariuki, Dedan Kimathi did not die in vain.

Dear compatriots, we are a nation at a crossroads, and it is within our reach to change the course of this nationâ€™s history and destiny.

But what really does it mean to be a nation under sanctions, which an Uhuru presidency portends?

First, with countries hesitating to trade with Kenya in the event of sanctions- Coffee, Tea and Horticulture industries would literally collapse.Â  Our trade with the EU, which accounts for 20% of Kenyaâ€™s total trade, would end.

As a result, an Armageddon proportion of business collapse would ensue.

Non-Performing Loans would stifle the banking sector, because, Agriculture which is the backbone of Kenyaâ€™s economy would be bleeding.

Banks would literally collapse because most banksâ€™ loans have farms and agricultural assets as collateral. Joblessness would intensify. Poverty would grind. Mortgage holders would lose homes. Retrenchments galore, worse than what we had in the 90s, would resurface. Â The consequences are vicious.

Kenya would slide onto a great depression. Nyachaeâ€™s Economy in ICU analogy would be an understatement.Â  Kenyaâ€™s pride and envy as the hub of East and Central Africa would be in jeopardy and in its place we would be a laughing stock of the region.

With budget cuts, an Uhuru or Ruto presidency would reduce the KDF into a ragtag militia, mediocre to even a 4 man Navy Seal Team, because budget cuts would mean that the government would have to prioritize. Terrorists would flatten Nairobi.

And like in North Korea- Kenyans would live on dog meat and barks of trees as delicacies to circumvent drought effects in the face of sanctions. NjeruÂ  Githaeâ€™s prescription of rats for dinner â€“ you remember that- Â would become Kenyaâ€™s signature dish.

My utmost hope and prayer is that out of mercy and compassion, Uhuru Kenyatta and William Samoei Ruto should put the children, youth, the poor and the suffering of this country before self, and decide to suspend their presidential ambitions until they are cleared.

Letâ€™s face it; the moment has arrived for Ruto to not just don a cap whose 4 colors are a symbol of national pride- black, green, red and white â€“ but to live and walk the patriotism that his cap represents.

Uhuru on the other hand is a name that invokes the â€œtrophyâ€ after a long struggle by great Kenyans like Dedan Kimathi, Jomo Kenyatta, Tom Mboya, Bildad Kagia, Achieng Oneko and Jaramogi Odinga.

These founders of our nation did not fight for â€œUhuruâ€ so their children would end up in bondage of sanctions.

An Uhuru or Ruto presidency- if the sanctions will materialize- would actually be more punitive to the very youth and hustlers whose cause they purport to advance.

I therefore solemnly urge you to join me in asking UK and WSR to seize this moment and save Kenyaâ€™s economy from imminent obliteration, which would be a certainty under their presidency.

Take this to the bank; sanctions will be a horse in this election.