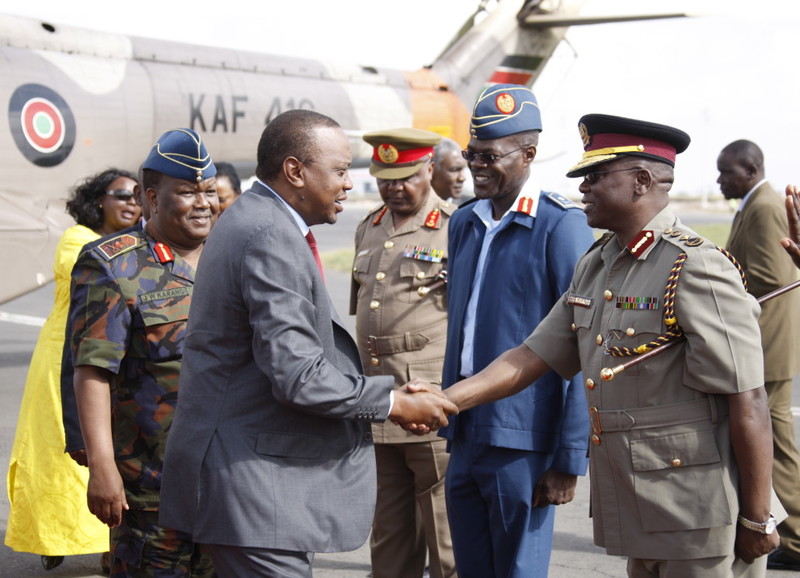 The Kenyan people are presently confronted with extremely difficult times â€“ runaway insecurity, high costs of living, rising unemployment, obscene disparities in individual incomes, dishonest leaders in both national and county governments and a captive citizenry. These are complex problems. They need complex solutions. But in the fashion that is uniquely Kenyan, we proffer simple and simplistic solutions thereto. The most outrageous of these is the militarization of our national security and reverting to the past to solve problems of now and tomorrow.

In the Statute Law Miscellaneous (Amendment) Bill 2014, the Uhuru Kenyatta government seeks to amend or alter motley of legislation. Among the Acts of Parliament it seeks to amend are the Kenya Defence Forces Act and National Intelligence Services Act. The changes envisaged in these so-called miscellaneous amendments are notmiscellaneous â€“ they are fundamental. They not only reverse almost all the gains made by the people of Kenya in the democratization and professionalization of the security sector but are also a direct assault on theConstitution of Kenya.

In this omnibus Bill, the state proposes to amend the law so as to do away with parliamentary oversight by giving the President and Defence Cabinet Secretary powers to unilaterally order military interventions and operations inside the country without the approval of the National Parliament.This is a road to national disaster but paved with good intentions like the road to hell. Coming in the wake of announced intention of the Kenyatta government to establish a Nairobi Metropolitan Military Command as part of the solution to the countryâ€™s security problems, Kenyans should be afraid. Letâ€™s be very worried.

Let truth be said. This Nairobi Metropolitan thing is euphemism for a presidential guard in the mold of Yoweri Museveniâ€™s and Salvar Kiirâ€™s elite units. As one with a fleeting knowledge of security but having observed the operations of elite military squads employed to police national citizenry in the cited neighbouring countries and elsewhere, I can state,without fear of contradiction, that we are courting a national disaster. In my humble view the militarization of our national security is such a huge step backward that is unprecedented even under the Jomo and Moi raw dictatorships.

Deploying the military to police our neighbourhoods without seeking parliamentary approval is a grave affront to our Constitution. It could lead to unprecedented human rights violations. Besides its potential to undermine the weak civilian institutions, this decision would trigger or aggravate mistrust between various security agencies. I have had the privilege of dealing with our national law enforcement agencies at close range and am aware of the mutual mistrust among them â€“ especially given the semi-militarisation of some services or detachments. Bringing in the full military personnel with no law enforcement training is like rubbing pilipili into a raw wound.

We should also be wary of giving the President a blank cheque to deploy the military without properly defining what constitutes aâ€˜national security threat.â€™ In a country where the borderline between national and personal political interests is so thin, there are fears of the military being misused by current or future presidents to further causes that have nothing to do with public interest. The high levels of political, ethnic,religious and socio-economic polarization of this country further exacerbate this situation. The Constitution of Kenya 2010 explicitly restricts the use of the military in law enforcement duties, and for good reasons. The roles of the police and the military are not interchangeable. They should so remain.

The changes sought in the amendment to the National Intelligence Services Act are equally far-reaching and backward. Among others,they seek to remove the requirement that the NIS should obtain court orders before arresting a crime suspect; to abrogate the right to privacy of persons subject to investigations by the service, including tapping of their phones and hacking their electronic communication; and limiting the oversight role of the National Security Council over key decisions of and concerning the NIS. Currently, the monitoring of personal communication is limited to persons suspected of having committed crimes. Since in theory every Kenyan is subject to NIS watch, this proposed amendment gives the service a licence to violate our right privacy at will. Are we back to the days of the dreaded Special Branch?

Many well meaning Kenyans are faced with the depressing prospect of watching as the gains made in a lifetime â€“ the triumph of freedom over tyranny, the enactment of a new liberating national constitution, the devolution of political power and resources from a choking centre to devolved units and the freeing of the media from the clutches of censorship â€“ all reversed in one fell swoop by an overbearing and reactionary Executive. We are about to witness hopes of young Kenyans dimmed and opportunities for a free and progressive future diminished beyond imagination.

A sense of bleakness and barrenness of life now pervades the existence, actions and reflections of even the most optimistic amongst us. Many who are still politically active are thoroughly discouraged. Scores of young Kenyans on the brink of political engagement are made to wonder, â€˜What is the point?and turn away disheartened and isolated.

Dear Kenyans, reject this swift and steady slide back to the dark past.