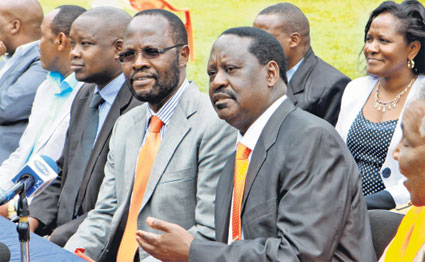 By Hon Jim Bonnie
Time has once again provided an opportunity for the Orange Democratic Movement to revamp, rejuvenate and reinvent itself. Party elections as they are known all over the world present an opportunity for party stalwarts to define the direction they want their party to take under the leadership of their choice.

As for ODM, this is the biggest and most challenging activity after the last general election â€“ which was a victory grabbed from them of course. Unlike past party elections which were marred by rigging and chaos, it should be known that it wonâ€™t be business as usual this round.

There is no time in the history of the party that its members have demanded a change of guard in party leadership as now. The call for change of guard has been propelled more by the bitter experience of â€œlosingâ€ the last elections. Nobody in anyway should underrate this move.

The lingering question is, â€œwill the party ownersâ€ sit and watch? Well it remains to be seen. But, it must be known that a change of guard and leadership style in ODM is now inevitable. Any stupid mistake and the party come down crushing like a house of cards.

Take it or leave it. Over the years, there has been a tendency of â€œparty ownersâ€ to draw a list of their preferred candidates then force it down membersâ€™ throat. This has proved to be a recipe for chaos and party discontent. I want to assume this monster wonâ€™t rear its ugly head again.

Raila odinga has been accused over the years of personally handpicking those he prefer for various party posts. While it is debatable, its net effect has been that most active and serious members of the party have been locked out of party posts. Some demoralized, left the party.

I have no problem with recycling the current party leadership but, only if they are voted in again by party members without any backdoor schemes playing out. It is highly unlikely that the current office holders will recapture their seats. This is my assumption – beware.

It is also possible for most of them to pull a surprise. My only worry with this filthy crop is that they may continue with their filthy style of leadership once they are reinstated. I swear this will be a proclamation of a death sentence for the party and the political life of its party leader.

Party members must also beware of the self proclaimed digital group craving for party leadership under the disguise of their age bracket. They may be worse than what we already have. Age must not be a factor in choosing our leaders. We ought to look at the qualities of a person whether small or big.

The underhand methods and dealings should be curbed from the grassroots to the national level. The prohibitive election fees which are designed to lock others out of the race must be done away with. The youth who have shown greater interest in leading the party must not be caged out by the financially mighty chaps.

It is a journey that must be guided by faith, dedication and trust. We donâ€™t want the idiotic â€œNgunjiri Wambugusâ€ anywhere near the party strategy again. We need serious chaps not demagogues who will want to use Railas popularity to stay relevant in Kenyan politics. This is disastrous.

As a matter of fact, there is no option in this. We canâ€™t afford to come out of this bruised and desperate. The democracy we champion as a party must be practiced now! The right people must get the right posts they deserve.

The party will have a bright future if the elections are democratic, transparent, free and fair. The new leadership must be innovative, dynamic and ready to sacrifice for the party. If in any case the tradition of predetermining suitors for various posts is maintained, I assure you brethrens; the party will R.I.P. so help us GOD!