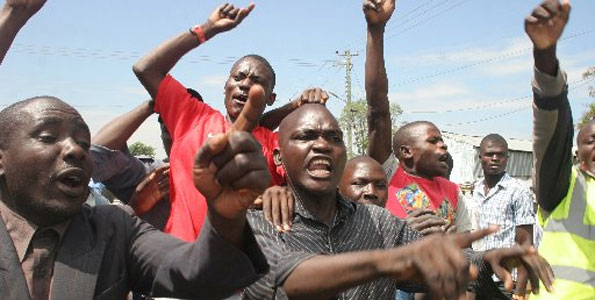 The just concluded party primaries have raised credibility issues and political partiesâ€™ preparedness towards the forthcoming general election. The mainstream and social media is awash with a cocktail of analysis by various political pundits.

Nothing can be further from the truth. The Orange Democratic Movement (ODM) primaries conducted on the 17th January though hit with some slight hitches were the most successful one.

The party (ODM) is the most popular in the country and in some regions its primaries are as good as a concluded election. ODM registered 100% successful nominations in 43 out of the 47 Counties, a cool 91% success!

TNA and URP of the Jubilee coalition (powered by easy cash from the Kenyatta Empire) failed to kick start the exercise on Thursday as they had announced, pleading massive logistical incapacities and poor organization. TNA had to move its primaries to Friday18th of January.

The postponement of TNA primaries midway into the nominations on Thursday caused major uproar in perceived swing counties of Meru and Nakuru, voters complained of precious time wasted and even some threatened to decamp to CORD

Due to this humiliating defeat in the so-called war of digital vs. analogue generations, Jubilee (TNA) ashamed of their own disorganization chose to divert attention from their own internal organizational weaknesses; it is at this point that jubilee arsenals were directed at every little detail in Siaya and Kisumu ODM nominations.

The emergency meeting at the Kilimani residence of a senior TNA politician with his top strategists directed that all resources be directed at the ODM nominations. The invaluable NSIS network and the decimating provincial administration came in handy.

The areas of operation were identified quickly and shared to the mainstream media as hotspots; Siaya Governor race, Kisumu senate/governor race, Gem and Rongo constituencies were all on target. These were identified as ODM core teamâ€™s bases where any claim of favouritism could be believable.

To register successful execution of the plan; Siaya was on target first, a success at discrediting Siaya primaries could be used as the spring board to the neighbouring counties. This plan worked well, it incited locals who in turn attracted sympathy from the rest of the community in neighbouring counties of Kisumu, Homabay and Migori.

Fear was spread in the region like bushfire, voters were told that there were preferred candidates and their choices were to be rigged out; did you wonder how it was possible that Dr Oburu Oginga had lost the nominations by Thursday afternoon only hours into the exercise and long before vote counting started?

Even when mainstream media in their Thursday 9 pm bulletins indicated that voting was underway in Siaya, social media was filled with news that a Mr. Oduol had floored Dr Oburu same word did rounds in the villages and the rest of Nyanza and that is how villagers started protesting- they had not even voted yet they were told Oburu had won!

In some places like Kisumu hired goons infiltrated campaign teams and even offered to cause violence to send a strong message to Nairobi, this was accepted by desperate candidates some who saw it as a chance to flex their muscles when it was clear they were losing.

The strategy worked well, the hired goons even burned ballot papers in Kisumu county where voting had not commenced effectively disrupting nomination process in some stations while feeding mainstream mediaÂ  and social media with propaganda.

Now you understand how a cross-section of the media announced the outcome of elections in the disputed areas without cross-checking with the National Elections Board, a body mandated to release the official results.
By the way did you hear or read violence in parts of Kalenjin land during the URP nominations? The deaths occasioned in Nandi County? Not even the chaotic Bomet governor nominations? Any news from Kipipiri? Your guess is as good as mine; we were busy in Siaya and Kisumu.

To this end, we urge the media to be responsible in reporting so as not to fall into the traps of merchants of violence who are seriously looking for refuge after conducting shambolic nominations where even innocent lives were lost. The other parties have failed even to address the conspicuous nomination fiascos emanating from their own nominations.

In a contest as expected, there would be winners and losers. In a democracy, some losers would accept the outcome of the results while others would disapprove the outcome for various reasons. ODM National Elections Board cancelled some results to pave way for dispute resolution mechanisms as provided under the party constitution, this doesnâ€™t construe a disconnect between the party rank and file and the masses as the Board has managed to dispense with most of the complaints.