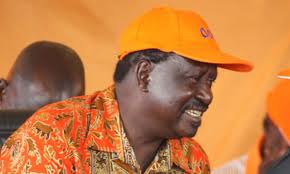 I have failed to understand this man for a long time now. When he is in parliament, he really delivers. At the party level, most people accuse him of high-handedness. I, personally attribute the failure of Jakom to win the presidency and especially the low voters registration and turnout in Nyanza to his arrogance. Itâ€™s clear to me how he managed to turn a Siaya issues into an ODM issue, something that came to haunt the party upto the election time. He is someone I admire and at the same time I canâ€™t understand. This man Jakoyo Kamidiwo!

ODM as a party lost the elections due to poor strategy, disorganization, dysfunctional secretariats, lack of inspiration, dictatorship by a few individuals, and alienation of party members from management of the party, cronyism among other factors. Every party member agrees that ODM is the single largest party in Kenya. As a matter of fact, it is the single party with the highest number of members in National Assembly, county assembly, women league and youth league. But on the ground, ODM is not the party it used to be. Members have lost hope. There is no direction. No clear guidelines on how its affairs are conducted. For example, nomination to the county assembly turned out to be a family affair. For example, my MP in Nyakach Hon. Aduma wuon Owuor, nominated two relatives. I have also heard rumors that in Gem, the trend is the same. This has not gone down well with majority of party members and he have a disappointed party members.

As a step to correcting the problems that we have been faced with as a party, ODM has embarked on filling the position of Executive Director. Many party members applied to fill this position. I expected ODM to at-least post the names and qualifications of all those who applied, but this has not happen. I have also gathered that at-least ten people have been shortlisted. Unfortunately for many members, nobody knows the criteria used to shortlist the said candidates.

Looking at the list, its very clear something is not right somewhere. Nyanza alone has four members!!Yes, they might be very qualified and equal to the task, but does it serve the interest of Nyanza to have 4 representative in that committee, yet coast, which voted cord mps have none! I understand this is just a vetting committee. They will not really appoint the ED, this will be left to elected party officials. The county chairmen, the MPs, the NEC et al. We must get some basics right.

As I indicated before, I am for Mr. Caeser Asiyo. I believe he has what it takes to move the party forward. When he served as the deputy campaign manager in 2007, he delivered. Two of my very close personal friends Norman Magaya and Nabii Nabwera also applied and I am wishing them luck.

ODM must get the basics right. I also do not understand why there is a hurry to fill the positions of those who left. Some of those post have been vacant for the last four years. We pushed for them to be filled before elections and the forces that want them filled now were the ones that refused. ODM should conduct a complete party election.

This tricks by a few clique who want to appoint their cronies to fill those positions must be resisted by all well-meaning party members.

For ODM to make an impact in 2017, radical changes must be made. The party must be taken back to the members! We must get the basics right.

Lee Makwiny is a blogger and The National Coordinator, ODM Youth 2012 lobby group!