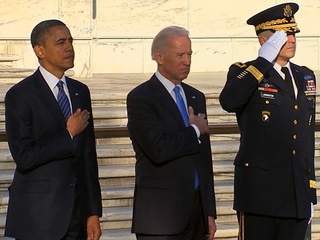 William Ruto and Uhuru Kenyatta, are anti-Kenya. As Kenyans were glued in their TV sets as Obama gets inaugurated, Uhuruto duo were very sad and mad, reliable sources say.

All that they care about is themselves and their ethnicities going by their anti-Obama pronouncements before US 2012 Presidential election.

Barack Obama son of a Kenyan herdâ€™s boy turned Harvard Graduate whom Jomo Kenyatta frustrated, mistreated and even sacked from work, has lately been a source of pride and self-esteem for Kenyans.

Mama Sarah has been receiving delegations days on end at Kogello Siaya Alego, Obamaâ€™s ancestral home, which has instantly become a tourist attraction, with international investors planning to build 5 star Hotels due to increased tourist traffic.

Kenya is once again on the world map, thanks to the leader of the free worldâ€™s heritage. It makes us Kenyans proud as we walk in the streets of Toronto, Chicago, London, being asked whether we are related to Barrack Obama.

However not everyone is happy that Obama, a man of Luo descent made it thus far. To Uhuruto even though Obama is American in mannerisms, to the accent to his core-belief, they will never judge him by what Martin Luther King called the â€œcontent of his characterâ€, no!

To the anti-Western duo, Obama is a Luo man, and that because Raila is Kenyan prime-Minister, they think that Obama shouldnâ€™t have been re-elected president. Regional balancing is what the â€œdigitalâ€ duo gives as the distorted reason.

They hate the leader of the free world so much that they supported Mitt Romney for President in 2012.

Their thinking was that as an ICC bound ticket that would bring sanctions to the Kenyan poor and suffering, Obama as leader of the free world is behind their woes. Thatâ€™s rather delusional, when the US isnâ€™t even a member or signatory of the ICC.

Their delusional thinking was that Romney as US President would have been aloof to Kenyaâ€™s internal affairs, and focused more on Mexico where his father was born. It was in Uhurutoâ€™s best interest for Romney to win.

Uhuru who at US$700m dollars, is almost threetimes as rich as Romey whose fortune stands as US$250m contemplated how he could go into Romneyâ€™s presidential campaign website and contribute a few millions of dollars via PAYPAL.

However on consulting his wazungu western lawyers they advised him to dare not, that the international financial system tracks dirty money.

And Uhuruâ€™s wealth is considered dirty money because one heâ€™s heir to ill-acquired 1.5 million acres of land larger than Israel and Palestine combined including millions of money stashed abroad by his own family.

And two, that it would raise an alert in the entire international financial system because VISA, MASTERCARD, AMEX, DISCOVER are all processed in the sophisticated US financial systems, plus he is regarded as a warlord whom the Kenyan media has been kind to address kindly just as â€œICC suspectâ€.

Romney himself would have gone public to reject Uhuruâ€™s ill gotten contributions which would have been a massive embarrassment to his legal team at The Hague. An American presidential candidate cannot accept foreign donations, let alone from a Warlord, and Romney is an American patriot who would have turned down UKâ€™s dirty campaign contributions.

Uhuru is not just a sanctioned sworn enemy of the Kenyan poor, micro business owners, mama mboga, but also a man whom the moral in the entire world get chills at the mention of his name. However, like Romney who struggled to shake off the â€œ47% tagâ€ during debates with Obama, Uhuru has no time for the mama mboga, the sick, poor and suffering. But thatâ€™s where their similarities end.

Uhuru is a man who according to this article can go to any length to deny Kenyans their dream to even have one of their descendants to occupy the seat of leader of the Free world- the most powerful man on earth.

Uhuru is a tactless anti-West suspected war-lord being tried at The Hague intent on aligning Kenyaâ€™s strategic interests with Communist Chinese Dictator Xi Jinping who the Times Magazine recently described as the leader of the Un-free world.

I have no doubt that as Team Raila prepares for Railaâ€™s guaranteed inauguration, the pomp at Obamaâ€™s second inauguration would be a reference moment to behold.

Those in Diaspora planning to attend the Raila inauguration after Mar 5th be warned to book air-tickets early, because the whole worldâ€™s air-traffic would be headed to the land of Dedan Kimathi and Koitalel Samoei, as the world would be welcoming an Obamaisque leader into its ranks, one of the most progressive and transformative leaders that the world has ever known- Raila Amolo Odinga.

The 2013 portrait of world leaders would not be the same- it would be refreshing with Raila Odinga in it. Letâ€™s make it happen.