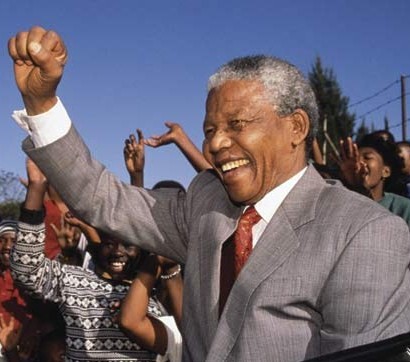 No doubt Nelson Mandela is a revered figure. But I have always wondered which part of Mandela’s personal history makes him an icon in the spirits of so many a people. Is it the long years at Robben Island? Or the short stint at the presidency of SA? Or the fact that he was one leader who trusted the realms of government even with the opposition?

Today, Daily Nation captured it all: “Africa prays”. So who are praying here at home? And why are they praying?

The history of independence across most Africa nations is a checkered history of the change of skin colours; from white to black, nothing more. In Kenya, a disturbingly religious nation, where the God is worshipped along tribal lines, and thanksgiving take political connotations, Mandela makes a mirage.

To be blunt, we in Kenya also have our own mandelas, scattered in the hills, lakesides and plains of this country. Each day, no one gives them a passing mention. Some of them; especially those who have refused to fade into oblivion, are treated with disdain by those whose dealings with fellow black men are as ignoble as the whites who incarcerated Mandela for decades.

Take a mental flight to 1963. Imagine Kenyatta overseeing the first government after apartheid. You all know who would be owning all the copper mines in South Africa. right? I guess you are already thinking who would have owned half of Jo’berg and Cape Town, right?

Imagine if this current Jubilee government would be the first black government in SA. Black tyranny. Could there have remained some whites in the government? Imagine the cabinet appointments, the principal secretaries, the presidential advisers, the legislature? I tell you we have no business praying for Mandela.

In Kenya, this generation tutored in the politics of ‘accept and move on’ cannot claim to be mourning an icon of democracy. Nelson Mandela abhorred white domination just as he loathed black domination; Mandela conceptualized a South Africa of Africans-white or black. Here at at home, is not our politics based exactly on this evil Madiba so scorned? Domination based on numbers? The so called tyranny of numbers?

The recent happenstances in our country denies every moral person the chance to weep silently by praying for ‘one more day’ for an African Model. In our country, liberation icons are being treated like pieces of trash, their “VIP” status constantly rebuked by characters whom, had they lived back in the day would have collaborated with the colonialists, or the slave traders, to put their own in ships or in barren lands for tilling.

I think Mandela will die a sad man because whenever he thinks of those who are going to weep over him, and send condolences, he shrieks in acute pain. He will be mourned by murderers-statesmen, killer-excellencies, corrupt heads of states, selfish first ladies, tribal heads of government, promiscuous clergy men, and coward populations of Africans who keep excessive governments in their place because of the plunderers are ‘one of their own’.

He will be mourned by leaders who still think Africa is going to be colonized tomorrow again. Who warn their people to resist ‘western interference’ but not internal corruption and wasteful expenditure. He will be mourned by warlords and criminals and petty politicians.

But we will also mourn him! We, the people.