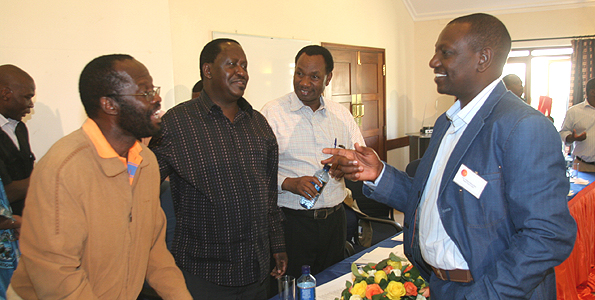 By G Oguda
In the papers last week.

Let me tell you this, and for free.

The Muhoroni Sugarbelt is where I spent my formative life chewing sugarcane and worming books. I have more friends from Miwani than I have in Jimo and Nairobi combined. The people of Kano are not only my dependable friends, but they are also my in-laws. Anything that touches on their land affects me, as a friend and as a relative.

The dispute over the towns mentioned over there did not begin yesterday. Miwani, where I went to primary school, and chewed sugarcane enough to run a midsized jaggery for twenty years, sits smack on the border of Aldai and Muhoroni constituencies. I have told you this before, that I first saw an arrow stuck on someone’s back during the politically instigated land clashes of 1992. Daniel Moi, then President of Kenya, and weary of the opposition onslaught that was coming after the repeal of Section 2A that gave us multiparty democracy, decided to unleash state terror on communities perceived to be supporting the opposition.

The Luo, who sit along that Nandi-Kisumu border, around those towns you see above, were directly on Daniel Moi line of fire. The Nandi people of Aldai are masters in kamikaze warfare. They ambush you at night and set your torch everything on their path, and when you run out for help they dart you with poisoned arrows that kills you on the spot. I could write a book about these things, because people have got away with too much bullshit in this country they think others were meant to roll over and let them have their will.

The reason Miwani Sugar Company is yet to be revived is the land question. Miwani Sugar Company sits on a 100,000 acres of nuclear estate. It is the only sugar company, in this country, bar none, that can sustain its operations without help from outgrowers. There have been many investors lining up to buy that mill and revive its operations. Most of the investors have been the usual suspects who loot government companies then use the loot to buy the companies back for a song.

The people of Kano, who lay claim to the land under which Miwani Sugar Company sits, have always made it clear, that the government will sell that land over their dead bodies, and they will defend it to the last drop of their blood. And if there are people who don’t bluff, they are my Kano in-laws. The descendants of Lwanda Magere, the keepers of the Luo Kavirondo defensive armoury, would the last of the Luo clans to be wiped off the face of the earth. You can quote me on that.

I once went to a remote village in Kakamega County called Kuvasali. It sits on the Kakamega-Nandi Border too, and the residents there have tales of Nandi rustlers running riot across the hill almost with impunity. There is a Health Centre on the foot of that hill at Kuvasali. I loved working with the locals mapping out health trends and stuff like that. Save for the tyranny of arrows they have been receiving from the guys over the hill, Kuvasali is a lush green rural outpost that I would recommend for agricultural investment any day. It has unexploited potential only hampered by routine violence from across the hill.

I see the Nandi County Government want to reopen wounds between them and neighbouring counties living in towns across their borders. They have unknowingly announced for war because the discussion on Luo forums right now is how these people have been taking them for fools. These guys have been pretending to support peace building between them and border communities while their real intentions have been to evict those communities and grab their productive land.

Kano Sidho. Kano Wang’aya. Kano Kabar. Kano Kabonyo. Those are the Kano clans sitting directly on the line of the Nandi fire along that ever tic-tocking inter-tribal hotspot. Let it be put on record that the Luo of Kano aren’t cowards. That’s a statement of fact, which the history of Kenya can attest to. Those guys will protect their land with every sinew in their body, they have done that before and they will do it again. Lwanda Magere did not die for some nondescript land grabber to think they can evict people and own every inch of this country. This will be the first trumpet.