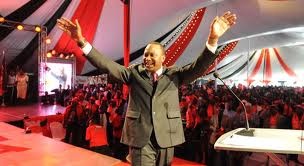 Nakuru is not ‘just some County’. It is the junction where TNA meets URP to form Jubilee. It is also the junction where CORD meets Jubilee to form Kenya. It is Kenya’s third most cosmopolitan county. That is why the list of nominees to the Nakuru County Assembly that is doing the rounds on social media should horrify every sensible Kenyan.

By no definition, can a 13 name list having 10 names from one community, be considered a fair representation of the ethnic diversity of that county. As icing on the cake, one of the 13 is the daughter of the man that drew that list, one Mr. Kinuthia Mbugua.

And how apt too, that Mr. Mbugua should release the list on the eve of the staging of Butere Girls’ play, ‘Shackles of doom’? With his list, Mr. Mbugua injected the much needed practical illustration of the subject matter of the play into the raging debate in a manner that drove the point home better than any of those lists that had been circulating earlier, ever did. Maybe I am being too optimistic, but a hunch tells me that President Uhuru is the man to free us from the ‘Shackles of Kinuthia, Kimemia, Kimunya and Kimaiyo doom’