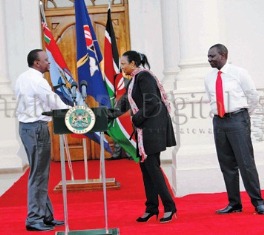 In the Presidentâ€™s team, the ethnic strength of members of both his and the deputy ethnicities is 10! This includes the Attorney General and the Secretary to the Cabinet. Meaning in a cabinet of 18 discussing the affairs of the 42 ethnicities, two ethnic groups have 10 members while 40 ethnic groups share the remaining 8.

In the Governorâ€™s cabinet, it is difficult to tell whether the deputy even canvassed for â€˜his peopleâ€™, thatâ€™s if they do exist. But keenly, one notices a determined effort to â€˜distributeâ€™ these positions in a manner reflexive of the ethnic realities of the 21st century Kenya. To take of the demands of moral politics, the governor has brought on board two of his former competitors. These are Eric Mokua (Ford-People) and John Gakuo (FPK).

In another bold move which offends devotees of ethnic myths and falsehoods, Dr Kidero chose George Wainaina, a Kikuyu, as his Chief of Staff. What this proves is that tribalism is in the particular leaderâ€™s mind. If the president must take cue then let it be that actions, speak louder than words; and yes, words matter!

Both men are good men. Both men are Christians.https://www.kenya-today.com/opinion/nairobi-governor-evans-kidero-executive-committtee