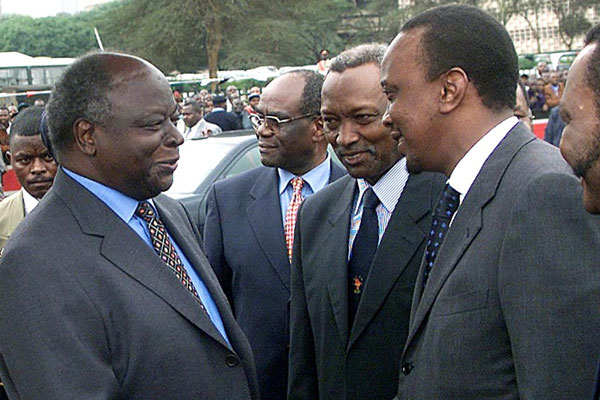 The invention of equity as an alternative path to a just resolution of disputes was due to the shortcomings of the common laws meted out in judicial institutions. Equity, therefore, served to supplement the rules and procedures of the Common Law, especially where the latter was found to be wanting.

Equity is fairness. Because I take Mwai Kibaki as a useless â€˜mavi ya kukuâ€™ president who, in just ten years, built an economy based on tribal voodoo, I will labour to prove my facts; because, â€œhe who comes to equity must come with clean handsâ€. These facts can only be in one paragraph, so look for them!

Again I do this to honour a great man who recently told me at a university in South Africa that â€˜I should never trust individuals, only institutions countâ€™. I mean Raila Amolo Odinga.

A lot of people have thanked Mwai Kibaki for his â€˜illustriousâ€™ shepherding of Kenya and â€˜peacefullyâ€™ handing over power to another president. In a bid to cheat history and make a mockery of the common sense of the people, an exhibition was arranged at KICC and a booklet hurriedly availed detailing all the â€˜achievementsâ€™, in only a decade of Kibakiâ€™s reign. These political shenanigans happened just before he left statehouse to his house.

Let me call myself a western Kenyan. I am in my early 20s. Let me also make your work easier by revealing to you my ethnicity, Luo! Finally, let there be no doubts as to my ideological leaning: ODM Party. You see, those three variables come with their attendant enculturation; educationally, economically, socially, politically and even religiously. I always doubt if we worship the same God. If Nyasaye Obongâ€™o Nyakalaga is Ngai.

Being western Kenyan, Kibakiâ€™s decade long presidency had the misfortune of teaching me how an extra-territorial government works. Government that is â€˜not yoursâ€™; their government. We lived through their police force, their army, their CID, NSIS, their judiciary, until one Willy Mutunga came on board and for a fleeting moment â€˜weâ€™ thought we had wrestled one institution out of their hands and gave it to â€˜all of usâ€™. Equity considers as done that which ought to be done!

People around me always talked about their Central Bank and their Equity Bank. Some who knew them by name talked about their Njunguna Ndungâ€™u and their James Mwangi. Today, it is highly likely that the 1000 shillings note in your pocket, or the 500 shillings note; or the 200,100 and 50 shillings denomination notes in your wallet or purse has their portrait. Even the coins too! Where did Moi go? Voodoo monetary policies.

In the last decade where we have been told to stop looking at the west and go east; or rather central Kenya, the Kenyan state was safely tucked under those the country has been made to believe have super entrepreneurial skills. They can succeed in business anywhere. How come the economy of Kenya dwindled during this time in terms of foreign direct investments inflows?

In the last decade, the financial future of Kenya was under one kikuyu minister or another. Even when vacancy arose and there was need for one to â€˜actâ€™ before a substantive minister was elected, Kibaki ensured he chose another Kikuyu. This is the wisdom I have never understood. Ten years of trustworthy tribesmen and what do we have? A country whose debt burden infuriates, while investments are at lowest ebb; a country of voodoo economics.

The people? We had Mwiraria, then Kimunya, then Uhuru, then Githae. True henchmen. Business-like people.

During that period, Kenyaâ€™s foreign direct investment inflow totalled (in USD) 1,184,373,003. How do we compare with our neighbours? Tanzaniaâ€™s DFI for that period stood at USD 4, 544,141,200 while Ugandaâ€™s DFI was USD 4,984,863,900. For every one million dollars investors put in the Kenyan market, they put eight million dollars in Tanzania and Uganda. We can show â€˜foreignersâ€™ our middle finger for all we care but these are the realities.

When you see Yoweri Museveni come in our soil and chest-thump, or Jakaya Kikwete urging us to show our belligerence to the â€˜worldâ€™, these nations are not for our own good, they are building their economies at the expense of our own. They antagonise us with the rest of the world so they can profit. I do not know what this kind of diplomacy is but for the last decade, they have perfected it, and reaped immensely.

Recently at the AU bicentennial celebrations, you saw it again; they are more concerned with Kenyaâ€™s affair at the ICC more than their own affairs, why? Because if only they can keep Kenya in constant bickering with the west, they know what the decade will hold for their people.

This is why I call Kibaki a useless mavi ya kuku president. He got a strong Kenyan economy and left a stronger kikuyu economy. It is this kikuyu economy which rigging elections protects, not the Kenyan economy. It is this economy which post-election violence wanted to fix. Sadly, it is this economy whose career IDPs sees no sense to jealously pursue justice. This is the peace and reconciliation economy.

To average Jubilee supporters who foam in the mouth every time you dissent in the manner things are done, they may be sobered to know that their Chinese friends are building Tanzanians a port at Bagamoyo which will make both Lamu and Mombasa ports childâ€™s bay. At Zanzibar, the Chinese are building mega hospitals and expanding airports. Time conscious Rwanda is saying their goods only take three days at Dar while seven days at Mombasa.

Tourism in Tanzania is at its all time high and poachers dealt with ruthlessly. Recently, they appointed three Americans as the industryâ€™s goodwill ambassadors and yes, POTUS is visiting later this month. More Tanzanians are flying within the country on their cheapest Pan African Fastjet while here; the deputy presidency still hires Bombardier Challenger 850, a Beyonce gift to Jay Z to take DP to a fiesta in West Africa.

And as my friend Jeff Nyamboga, a PhD student specialising in regional competitiveness tells me, this is bad for our economy in both short-runÂ  and long-term, even with the envisioned East Africa Federation.

Ten years and what do we have to show today? A superhighway to Thika. And what is the relevance of Thika town today for Kenya? You can point your middle finger to the ICC and the west; but mine points very close home, and I bet you can guess.

There is an expression, I think it is Latin. â€˜Axpressum facit cessare tacitumâ€™. That which is expressed puts an end to that which is unspoken. In the final analysis, I am just a small Lake Victoria fresh water fish struggling to move on! Haha!

Dikembe Disembe is a Raila sycophant.