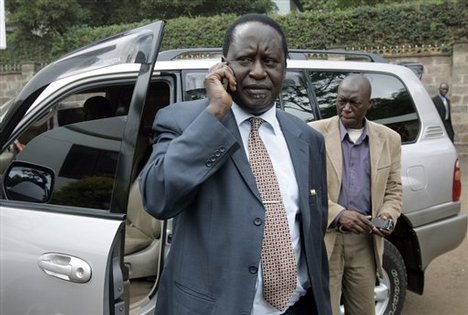 JUBILEE GOVERNMENT IS PRACTICING OPEN DISCRIMINATION
By Joseph Lister Nyaringo
The revelation by the government that former Prime Minister Raila Odinga has refused to surrender 6 government vehicles has left many Kenyans in a state of quandary. Many are questioning why itâ€™s coming after the burial incident in Gusii (attended by Raila) where Uhuruâ€™s point-men were shouted down by mourners.

Was Raila given conditions he should uphold to keep the vehicles by the Jubilee government which he has violated? Besides the burial in Gusii, Raila has experienced a series of humiliations from government officials especially when flying in and out of the Country in our national airports.

If the government spokesman has revealed that Raila has 6 vehicles, those who held public offices and are friendly to the Jubilee government should be having more especially Moi, Kibaki, Mudavadi, and President Uhuru himself.

Are we not being ripped off as a nation in broad daylight and the rippers are using Raila as a scapegoat?

Watching the pronouncements from Mr. Muthui Kariuki; the government spokesman, his rancorous undertones reflects a government not ready to respect dissent and positive criticism from the political opposition.

Kariuki, is a great candidate for the old order of the Joseph Kamotho days. No wonder, Professor Mutua Makau was right when he once questioned why Jubilee mandarins get angry even at the slightest criticism to the coalition.

I hope Jubilee strategists are taking stock of the silly, verbose and childish talk from the unprofessional government spokesman, which cannot build the confidence of Kenyans in the current government.

If I were President Uhuru, I will fire Kariuki kesho asubuhi and replace him with someone who is sober and with a good PR.

Kenyans expect service delivery devoid of any form of discrimination. However, going by the current show from the Jubilee government, itâ€™s clear that those seen to be critical are likely to be marginalized.

This gesture has been vividly reflected on the lack of impartiality while allocating public positions, where communities of the President and his deputy have taken a lion share.

Recently, the Parastatal reform commission was given 10 names of appointees where six of them are from the Kikuyu community. Iâ€™m not against Kikuyus and Iâ€™m sure those shortlisted meet the threshold of professionalism but we need to respect the constitutional order of ethnic balancing to boost our nationâ€™s diversity.

If this negative trend by the Jubilee government goes undeterred, healing the nation will be an elusive venture. It also casts a dark shadow to other communities like Kisiis, Luyias, Luos and Kambas, for the simple reason that they voted for different candidates during the March elections.

We canâ€™t afford further polarization and disharmony in our nation. We are looking for a final cure since we are reeling from the sharp divisions caused by the 2007 and 2013 presidential election results. President Uhuru and his deputy hold the yardstick to make us float and swim as a nation or sink and drown completely.

To my understanding, itâ€™s not the first time that funerals have turned acrimonious especially when key speakers are politicians. Even when political speakers try to shun political talk, mourners often demand to be addressed especially when a leader they reverence is in attendance.

In fact, trying to stop a Kenyan politician from talking politics in a funeral or any non- political gathering is like telling a Priest attending a farmersâ€™ meeting not to evoke the name of God. Judging from the March elections, Raila Odinga commands more support in the Kisii community than Uhuru Kenya and all the jubilations from attendees at the funeral were expected. Those who voted for him in March would do it again if elections were held today.

Thank God there was no violence during the showdown. Itâ€™s therefore illogical for the Jubilee government to cry foul that a former Cabinet Minister and current Cabinet Secretary were shouted down.

As a Kisii, Iâ€™m 100% sure that our people are civilized and would not shout down a seating President especially if President Uhuru Kenyatta was in attendance.

Early this year during the campaigns, former Cabinet Minister Simeon Nyachae; a respected elder in Gusii, was shouted down at the same venue by the masses while campaigning for President Uhuru Kenyatta.

Iâ€™m sure those who shouted Nyachae down didnâ€™t do so out of disrespect. They differed with his support of the Uhuru candidature. After all, Kisiis respect Nyachae more than Ongeri, Uhuru, Raila and Matiangâ€™i combined.

On the 6 government vehicles the former PM has, I think itâ€™s high time the government carried a forensic inventory of all public properties on the hands of past and current office holders.https://www.kenya-today.com/opinion/muthui-kariuki-confirms-uhuru-kenyatta-goverment-practising-discrimination