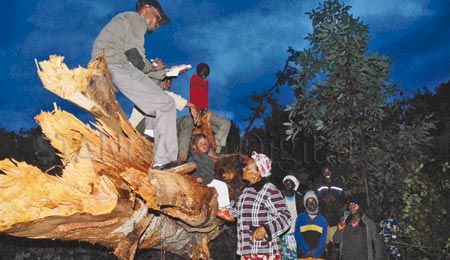 Elders who were consulted at that time intimated that whenever that happens, a great leader falls from Grace to Grass. When it happened in 1992, Matiba’s campaign begun to crumble resulting in a humiliating loss by Moi in 1992.

Just before the assassination of anti-Kenyatta Central Kenya’s political hope for the landless masses, JM Kariuki in 1979, a Mugumo tree in Ndaragwa fell a day before JM Kariuki was found dead.

Elders therefore suggest a ritual ceremony to appeal to mwene nyaga(the owner of all Ostriches-god) to intercess and save the imminent loss of Uhuru Kenyatta.

They dont take a shrine’s fall for granted. Given its deep roots, and longevity, it takes the spirits and the gods to bring down a tree as invinciple as the fig tree which is the dwelling place of god for the Agikuyu people of Central Kenya.