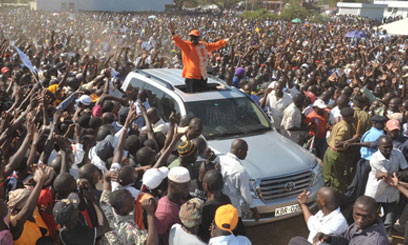 Ever since Kenyaâ€™s independence in 1963, Kenyan politics have been characterized by ethnic tensions and rivalry between the larger groups, escalating into the 2007â€“2008 postelection violence that nearly plunged the country into a civil war.

There is need to raise one million signatures as required under the popular initiative (article 257) to amend article 136 of the constitution to provide for the election of the president through a county based electoral system as opposed to the current one-person-one-vote system which has been reduced to a mere census of tribal numbers.

The beauty of Kenya’s diversity is such that there is no majority tribe. There are large tribes but none is more than 50% of the population. For example, its largest ethnic group, the Kikuyu, make up for less than a fifth of the total population. In reality, therefore, Kenya has a safety of numbers, and not a tyranny of numbers, among its ethnic groups. However, to exploit this reality, Kenya must institute a presidential electoral system where all ethnic groups, large and small, feel safe and important in the prosecution of national affairs, especially as embodied in the election of the President and the Deputy President, who are symbols both of national consensus and of the unity of the Republic.

The system must move the country away from the current state of affairs where large tribes tyrannise smaller ones during elections, and where the main criteria for occupying the Presidency is the numerical size of the ethnic blocks backing a candidate. The system must boost the process of devolving power from Nairobi, an act designed to improve local governance and to reduce marginalization and the risk of conflict between communities.

Such as system is only possible where the President and the Deputy President are not elected directly in a popular vote nationally. Instead, they are elected indirectly by popular vote on a county-by-county basis.

The United States of America elects its politically powerful president via an electoral college designed to ensure the election of the president through a popular vote and to protect the interests of the states. The founders of the USA wanted each state to have a voice in the election of the president and, therefore, even small states have political influence nationally. The US Constitution specifies that the president and vice president be chosen through the votes cast by electors chosen by the states, rather than by a direct popular vote. Hence, the President and Vice President are not elected directly by the voters. Instead, they are elected indirectly by “electors” who are elected by popular vote on a state-by-state basis. And a candidate can become president without having obtained the highest number of votes nationally in the sole or final round of popular voting.

The county electoral system is a block, or weighed, voting system that is designed to give more power to the counties with more votes, but allows for small counties to swing an election. Under this system, each county is assigned a specific number of votes that is proportional to its population, so that each county’s power is representative of its population. So, while winning the popular vote may not ensure a candidate’s victory, a candidate must gain popular support of a particular county to win the votes in that county.

Should none of the candidates win 169 electoral votes a runoff between the top two candidates will be conducted.

Under the system, and using IEBC figures, results of the 2013 elections would be: