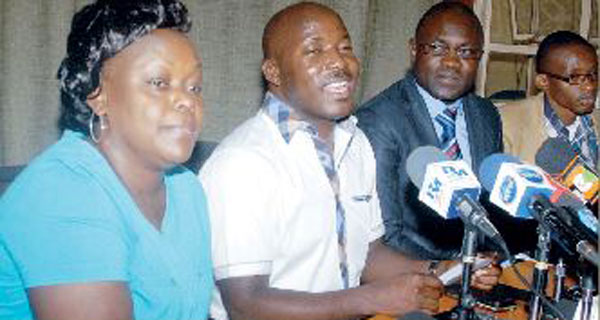 In Kenya, multiparty democracy is at the core of governance. This means that for democracy to thrive, the political parties within our borders must be viable, distinct and vibrant.

Consequently, anybody attempting to undermine the multiparty characteristic of the country is violating the constitution. Within the opposition ranks, numerous members of parliament, a governor and some elected leaders have variously come out to express open defiance to party positions and challenging the authority of party organs and leadership. This is unacceptable in law and in political systems such as ours.

Some leaders from Nyanza are cavorting and cohorting with Jubilee government functionaries and are being financed to form their own political parties while they are still members of ODM.

These MPâ€™s are notorious for lining up at the Governorâ€™s office to receive their weekly sycophancy allowances while are afraid to cross the floor, relinquish their ODM positions and seek a fresh mandate on parties of their choice from the electorate. Through their open opposition to the ODM party policies, positions, interests and that of its leadership, the leaders are defrauding those who elected them on ODM tickets to the positions they currently enjoy.

They are also in violation of the Political Parties Act and the Constitution. At public rallies, these rebels are loud with insinuations, accusations and allegations against their own party. Often their charges are contradictory, inconsistent and illogical. What is interesting is that a formal party meetings such as the parliamentary group or national executive committee meetings, these rebels either boycott or talk very little.

Some of the MPs mentioned are:

After openly rebelling from ODM and going further to form a new political party to liberate Nyanza while also protecting the mother of all political battles in Nyanza against ODM, one would wonder why the elderly Dalmas Otieno Anyango is shy to come out and openly join Hon. Onyonka in calling for Raila Odinga to step aside and allow Nairobi Governor Evans Kidero to run for Presidency.

The fabulously wealthy first-time Governor has cut a niche for himself as an ardent defender of harambees, most of which he has been conducting in the Southern Nyanza region of Kenya far from his Nairobi County. He is also the one Onyonka proposed to run for President of Kenya as Raila Odinga is forcibly retired. Kidero has opposed most ODM programs and mostly participated in those involving Jubileeâ€™s President Kenyatta. Like others who run for offices in the aborted ODM elections, Kidero quit the race for Vice-Chairman of the party after it became apparent his state-sponsored aspirations would not bear fruit.

The Mbita member of parliament is reported to be the ring leader of the rebel members of parliament with Kisumu Central MP Ken Obura deputizing her.

Recently, Hon. Mabona crossed the redline when she shouted down the party leader and dared him in front of ODM NEC members and coalition partners. She is a proponent of the Kalausi and occasionally exchanges notes with Hon Otieno to strategize on the launch of the new political party.

She has claimed she will run and be elected whether she is in ODM or outside it, and does not need the patronage of Raila Odinga who first nominated her to parliament. She asserts that the days of hanging onto Raila’s coat are over. Mabona is believed to have gained guts after being heavily funded and also being promised a key party position, likely to be secretary general, in the outfit being built for project Kideroâ€™s presidential run in 2017.

Has been repeatedly warned by Siaya County ODM chairman Oloo Okanda for opposing ODM ideologies and propagating pro-Jubilee agenda. He is a no-show in all CORD rallies, including one which CORD principals held in his back yard in Ugunja.He has on numerous occasions publicly stated that Raila is finished, and Luos must now work with Uhuru Kenyatta.

A constant presence at fund raising rallies organized in Nyanza by Nairobi Governor Evans Kidero. Hon Osele is a rookie but extremely vocal legislator who has quickly played into the hands of Jubilee machinations, and is now firmly aligned to Kideroâ€™s faction which most believe is Kalausi. Osele has been easily manipulated by frequent handouts from the Nairobi Governor.

One of the key members of the group and the main rabble-rouser. Ever since he controversially won the ODM ticket and was eventually elected to parliament, Hon Obura has let his selfish and premature ambition cloud his ability for reasonable thinking. Hon Obura was rescued from certain jail time in Tanzania, when DP William Ruto bailed him out in Tanzania after he was arrested by law enforcement officers in possession of contraband substances. For this reason, the DP only needs to make a phone call for Hon Obura to dance to his tune. He was among the MPs who defied party leader in the campaign period preceded the contentious ODM elections that aborted at Kasarani. His candidature for the ODM Secretary General position was financed by Jubileeâ€™s URP wing through the National Security Intelligence Service (NSIS).

Has has never been seen at any major Okoa Kenya event and was a glaring omission at Baba While You Were Away rally at Uhuru Park. His Okoa Kenya signature collection efforts are unknown, some say non-existent. He was first elected to parliament following the death of former minister Joshua Ojode. He has on two occasions publicly stated that Raila lost the last General elections and Luos must now move on.

A political hireling of the wealthy Nyachae family, this former FORD-P legislator has his eyes locked on the Kisii Gubernatorial seat come 2017, and he believes the only way he can defeat the popular incumbent Governor James Ongwae is to align himself with the Nyachaeâ€™s through the acting patriarch, CIC Chairman Charles Nyachae. Ongwae is known to enjoy very close relations with CORD leader Raila Odinga.

A wheeler dealer with several land-related criminal cases pending in Court. He is a key Kidero ally and the main coordinator of his many harambees in the South Nyanza region. Hon Oner was recently allocated part of the controversial Karen land at the behest of Kidero. He has on numerous occasions publicly stated that the days of political rhetoric in Nyanza are long gone and Luos must now support a development conscious leader like Kidero.

He has never attended any CORD function since the last General elections, dismissing the opposition Coalition as an exercise in futility. He has also been gravitating towards the Nairobi Governor as alternative centre of political power. He is said to be close to Hon Raphael Tuju and was the first to applaud when Miguna Miguna joined up with Raphael Tuju to congratulate Uhuru Kenyatta when the latter was declared winner in the controversial presidential race. He has not made it a secret that he wants to co-operate with Jubilee government. He too attended Uhuru Kenyatta address of the special joint session of parliament and senate which CORD had resolved to boycott. His speech when he welcomed the first lady to Siaya recently was laced with attacks on CORD and its leadership, calling laying blame on opposition politics for failing to develop the poverty-ridden Nyanza region.

When President Uhuru unprocedurally convened both houses of the national assembly and senate before purporting to hand-over power to Deputy President William Ruto, Hon Ogari defied the CORD resolution to boycott that special sitting of parliament and attended.

Observers of the Abagusii political landscape have noted the MP increasingly gravitating towards Jubilee, and it was not long before he too would be drafted into the anti-Raila campaign driven by State House through Hon Dalmas Otieno and Nairobi Governor Evans Kidero.He was a key member of the Ababu. Namwamba faction during the aborted ODM elections.

Being one elected on FORD-Kenya ticket, Hon Kopiyo has aligned himself firmly with the anti- ODM forces in the larger South Nyanza region. He has on many occasions attended public functions graced by Governors Kidero and Obado, Dalmas Otieno and Deputy President William Ruto.

The ever broke Nyaribaribari Chache MP has now turned into the mouthpiece of the Kidero for Presidency bandwagon. Onyonka has in the past been used by Jubilee to spearhead numerous futile political initiatives, including the bid to withdraw Kenya from the ICC. Those in the know claim that Onyonka is in the financial red and now relies on weekly hand-outs from Governor Kidero for basic subsistence and to sustain his many concubines within the National Assembly. Onyonka also has several graft cases pending in court which the Jubilee government is using to blackmail him.

The perennial contestant but first time MP is more of a businessman than politician. He is well- known to have had old ties with the Nairobi Governor since the days of his stint at the helm of. Mumias Sugar Company Limited where together with Lugari MP Ayub Savula, they were used by Kidero as commission-paid conduits in multi-billion shilling mega sugar deals. The MP is suspected to be one of the conspirators who betrayed the late Dr. Robert Ouko leading this his gruesome murder by government functionaries. Hon Koyoo has been a pro-establishment figure since the days of single-party dictatorship, flip flopping from one side of the political divide to another in pursuit of personal aggrandizement. He is one of the key players in the Kidero axis of ODM.

Other key places within Kidero’s ambit are ODM director in charge of ground logistics one Caesar Asiyo based at Orange House. The other is the perennial loser in the Gem parliamentary seat Elisha Odhiambo Akuba, now reduced to running money minting errands for Nairobi Governor Evans Kidero, and the self-styled Mwalimu Odoyo Owidi from Kasipul who Chairs an amorphous donor-funded organization known as the Luoland Dialogue Initiative chairman.

Party discipline is the cornerstone of modern democratic practice and the ODM National Executive Committee must crack the whip on these wayward politicians in conformity to the political parties act. Whipping is not limited to impositions of penalties and fines. It includes taking drastic action such as written warnings, suspensions or even expulsion from the Party through the due process.