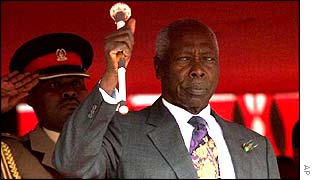 By Dikembe Disembe
“The secret of freedom lies in educating people, whereas the secret of tyranny is in keeping them ignorant” -Robespierre.

This programme was unique to Kenya in the sense that our country had the highest participants. Over 7000 kenyan youths applied to attend this programme and some lucky 50 or so were picked to join 500 [plus] others.

Across Africa, several young people attended this leadership programme, many from countries which if the choice of who attends was wholly left for their governments, only children of ministers and diplomats and state wheeler-dealers would join in.

President Moi is right to be concerned. A decade after KANU, the March 4 re-entry of the cockerel in state power must be jealously guarded, and ignorance is the greatest supporter of tyrannies.

When we say ignorance supports tyranny, we mean that people blocked from advancing in their own individual capacities would easily detour to poverty. With poverty, the ethnic politician, himself wealthy for embezzling or amassing resources which would have given you a head-start, becomes your baba na mama.

Each of the 50 youths coming back from YALI have made, outside this programme, their own personal connections and many – believe me – will be returning to the US for studies or foundation fellowship or research undertakings.

The other danger these youths are bringing back home is a change in their own world-views. When you visit DC and stand in front of that great monument of Dr. King and think deeply about your own individual history and contribution to whichever struggle is going on in your own country, or stand in that open space between Capitol Hill and the White House and think for a moment that ‘your dream is valid’, you become a great danger to ‘small people’, however high up in governments of your country they are and whatever power and influence they peddle.

And if you are the type who believes in infrastructure and sees those magnificent buildings and move around in subways, you realize to be happy about Thika ‘super’ highway is to accept mediocrity.

And then finally you are hosted to a dinner at the White House and you realize it is so unlike this one in Nairobi and that even the current holder thinks of himself as a temporary occupier on behalf of the people of the United States, not owner, and he tells you that with a little pluck and push and sweat you too can be who you want to be – second names notwithstanding – you become a danger to ‘these small people’, however old they are; however high up in government they are; and whatever power and influence they peddle.

So really, Moi has a reason to be worried.

The youths who participate in the YALI programme are among the most politically conscious in Kenya and America is still the safest home and custodian of political activism. Nothing best illustrates this than the fact that in 2006, a junior senator from Illinois with roots here came and told us – in a lecture at the University of Nairobi – to deal with our famed corruption and ethnicity and he was reminded that he’s ‘junior’ and two years later he would prove us all wrong and five years later he would invite some 500 young Africans to tell them to dream big, however junior they are.

That’s what YALI is all about – an event where you get inspired by a doer to be a doer.

Truth is, YALI ‘spoils’ African youths with new ideas on how to participate in the civic and political spheres of their countries.

Apart from long-term academic and research scholarships, YALI’s short duration but intensive study tour, and its ability to allow African youths observe daily the workings of the world’s biggest democracy, full of its own contradictions, must worry anyone who still want to chain his people using ignorance and ethnicity and fear and dread.

Anyway, we who have gone to similar programs as YALI only wish that many Kenyan youths find their paid visa and tickets to the world of opportunities. There is an alternative: Communist Peoples Party of China recently visited its like minded partner – the Jubilee Alliance. Maybe we’ll soon see a planeload of akina Wahome Thuku headed to the land of Mao.

Let it be clear though, I do not hold brief for the US Embassy in Nairobi or its programs. I only added my voice to ‘convince’ President Moi that while the education institutions he built in our country are manufacturing thousands each year, opportunities and ideas for progress may be outside our borders.

To tell young people not to try their luck is to ask for too much Mr. Toroitich, especially when your own children and grandchildren are more British and American in their mannerism than they are Tugens, or Kalenjins!

‘Education’, observed Horace Mann, ‘is the greatest equalizer of the conditions of men’.