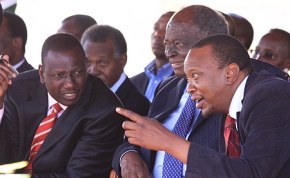 Here is a breakdown of bills paid by the tax payers for Uhuru’s inaugration ceremony, you be the judge if it was a fair allocation or just a conduit for embezzling of public funds.

1. 50 million was spent on hospitality for President Kenyatta and President

2. Sh10 million for gifts which were given to retired President Mwai Kibaki.

4. Sh850,000 paid the Ministry of Public Works to mark Kasarani grounds in readiness for the event.

5. Sh14.6 million was spent on accommodation of 10 Heads of State who attended the event despite some travelling to their respective countries the same day.

7. Sh6.7 million spent on paying traditional dancers from counties, gospel singers and bands and for entertainment during the State Luncheon.

8. Sh957,000 was paid to traditional dancers who entertained guests during their arrival and departure.

9. Sh7.2 million spent on a legal committee. In the budget, there is research and drafting of legal documents (hiring of legal experts) for election purposes .

Francis Kimemia prepared a budget of Sh1.2 billion, which then Treasury PS Joseph Kinyua slashed to Sh279 million. There was also a separate budget of Sh64 million which was funded by the Judiciary, bringing the total cost of the ceremony to Sh374 million.

The committee which coordinated President Uhuru Kenyattaâ€™s inauguration ceremony is yet to make public its report as required under section 19 of the law. The team, referred to as Assumption to Office of the President Committee, was supposed to table the report before Parliament within three months from the date of the swearing-in of the President.