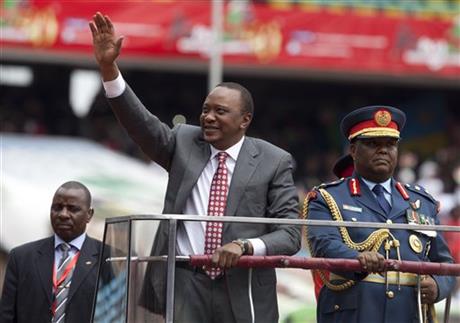 Right from the time he was appointed Kenya Air Force Commander, one could see Maj Gen Otieno was a transitional appointment and bound to knock him out of the General Karangi succession that. Shaping up now. Ask yourself, if Kibaki could extend 62 year old Gen Karangi’s tenure on basis that Kenya was at war in Somalia, why not Uhuru for for 56 year old Maj Gen Otieno?

Whichever way you look at it, these latest changes will be deemed unfair and targeted at certain tribe. You see, even the new Deputy Commander Kenya Air Force Maj-Gen Ogolla is not a young man either, and will have clocked retirement age before his immediate boss is promoted. Meaning, he will be lucky to ever be commander of Air Force let alone fall in line for being considered head of KDF.

This is nothing but yet another another transitional appointment carefully planned to keep certain types of people completely out of the succession line to be Kenya’s Chief of Defence Forces. Be fore you know it, you-know-who will have swiftly taken over from Karangi as CDF and will occupy the seat for the entire term of president Uhuru regime

CHIEF OF DEFENCE FORCES A position other tribes can only dream about!

The only criteria is you have to be Lieutenant General. And it is the president as CiC who decides who gets promoted. For most of these career soldiers, the furthest they can go is Maj-General, as Otieno’s case aptly proves it!

No so long ago, Lt. General Opande, a Luo, was swiftly retired after spending years overseas in government instigated UN appointments. Opande is perhaps Kenya’s (and East Africa’s) most feted and honoured military officer. He was primed to be Chief of DF but that never made it. Instead, semi illiterate junior officers like Mahmoud and Sumbeiywo were given commander and CGS positions by KANU government. Opande was to be placed in the retirement dustbin by Kenya government even as West African governments showered him with awards and honorary citizenship. Actually, one cannot equate Gen Opande’s achievements with those of Gen Karangi; the difference is like day and night. Opande brought lasting peace to war torn Liberia, Sierra Leone, etc, but here in Somalia, you and I know that apart from charcoal, smuggling, poaching and needless bloodshed, nothing else is happening.

Back to the subject, another Luo, Maj Gen Awita who was retired as Navy commander at 55 but unlike General Kianga who was swiftly appointed Chairman of Kenya Railways and is now overseeing implementation of the multi-billion Standard Gauge Railway project, Awita was never given any state appointment and is presently looking after his cows at a farm somewhere in Western.

Another technically experienced Maj Gen Agoi, a Luhya, who gallantly led the rescue efforts following the 1998 terror attack on US embassy in Nairobi also similarly faced early retirement, and was then was lucky to land a diplomatic appointment. Not much is heard about him in recent days.

The just retired Maj Otieno, a Luo, is an experienced jet fighter pilot and highly trained military logistician whose career progression was borne by by tax payers. That technical know-how is now going to the village. Perhaps the UN or some other military can offer him a position, I dont know.

Yet, amidst all this, those who led in fumbling and blundering in the Westgate siege continue to serve in plum positions. Those who failed to act on intelligence of the impending mall attack, some of them approaching 70 years old are still serving in key positions in the state security apparatus.

At times, you just have to bow your head in shame for being called a Kenyan!