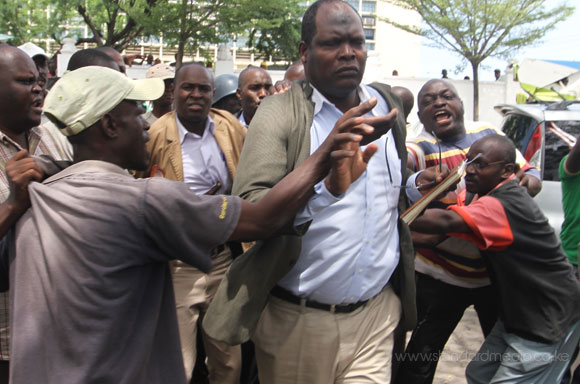 Migunaâ€™s cash cow is a piece inspired by Migunaâ€™s inconsolable obsessions, perseverations and vacillations and refusal to heal and move on from an event that happened almost 3 years ago when he was fired from the then Prime-Ministerâ€™s Office.

Miguna’s Cash Cow is the story of a bizarre and opinionated writer who left what he calls â€œa thriving legal practice” in Canada so he could to come to Kenya to squeeze his way into the top echelons of the party lead by his tribal “Paramount Chief”.

To any person, itâ€™s evident that Miguna’s motive and thinking in going headlong into serving in what he has lately been calling Â Raila’s Caliphate was just like any other Kenyan tribal chauvinist, out to swim in the popular wave of his tribal chieftain to become a Luo Nyanza MP(Nyando) through the Caliphate’s political party.

Even though Miguna prefers to call Nyanza a single party dictatorship, people like Raphael Tuju, Shem Ochuodho, James Orengo, and so on, unlike Miguna, had the balls to try Â their lucks through other parties like SDP, PDP, etc that also rule in that region.

And so Miguna, fully aware of the risks involved in his dalliance with Raila, and ignorant of all the “red flags” that he enumerates in the early pages of his gossip filledÂ “magnum opusâ€, Peeling back the Mask, submitted self and gave informed consent to be utilized, monopolized, used, dominated and harnessed, by a man he sucked up to and served with religious, wifely and sycophantic zeal.

In return, DN of Jul 26 2012, reports that Miguna would demand- from procurement officers- expensive phones like Blackberry Storm in place of modest but state approved ones like Blackberry Curve. Rather than begin to lay groundwork for the consolidation of gains in freedoms and good governance, Miguna as a high ranking government official set his eyes on an evil first agenda of business.

DN of Jul 26 2012 also reports from primary documents that Miguna the Luo extremist also demanded that his office is “tiled instead of carpeted”. As you can see, and as is widely documented, contrary to his crocodile tears for the Luo nation, Miguna’s first agenda of business and subsequent preoccupation wasn’t the liberation of his Luo tribesmen, but the “maximization” of state benefits. Miguna pursued all the benefits (some petty of course) that he could lay his hands on- at the expense of the taxpayer.

Rather than set an example for what should have been the virtues he portrays to the world in his hateful writings, Miguna is reported to have indulged in excesses, sometimes outside what a local daily calls “laid down procurement rules and procedures”.

Blackberry Curve worth 30,000 was the one allowed by procurement rules for his job group, but Miguna demanded (read blatantly abused powers) Blackberry Storm (Ujaluo Itakuuwa jameni) worth twice the approved amount. Caps like that are set to curb abuse, but Miguna, as any other Kenyan in a powerful position is reported to have preferred a more expensive phone in circumvention of laid down rules and procedures. Isn’t that corruption?

Testament to his hypocrisy-Â  Miguna, a ultra-Luo extremist(more adept at navigating the Luo softwareÂ  than Raila himself)- was not going to contest for the Nyando seat on a party like DP or NAK which he hated with a passion for not being a Luo party, but whose ticket he would have gotten with ease.

Instead he was determined to clinch the ticket on the party that stood the best chance in Nyando. Through ODM, Miguna was desperate to be “politically correct”, a sure ticket to becoming a Kenyan “MPig”, where he would have gladly accepted the exorbitant and controversial MP pay and benefits to the tune of millions. For what else should we expect ofÂ  a man who accepted the exorbitant perks that went with the job group conferred to him by his tribal Paramount Chief to remedy his defeat in the Nyando 2007 ODM primaries?

And not just that, it is well enumerated in his gossip book that Miguna offered to serve in Railaâ€™s Presidential Campaign Strategy Team, of a party whose “chaotic, confused and violent” nomination process he had just been a victim of. In Fact he continued to rededicate his allegiance to Jakom, in a conversation in which he broke to him the news of terribly losing the Nyando Parliamentary Seat.

This man was scheming to become a statehouse insider, a tag that Kenyans intent on building a fortune for themselves always salivate for. By hanging on Raila’s coat-tails, Miguna hoped, his tribesmanÂ would cruise to the center of power, and that way enter the kitchen cabinet like Joshua Kulei, where, he schemed, he would brush shoulders with the high, powerful and mighty, and God-willing, become filthy rich.

Miguna in his peeling back the Mask,Â leaves no doubt, that his and Raila was a Master-Servant relationship. Itâ€™s evident that the Canadian educated barrister who has been caught on camera “typing with one handâ€ was a ritual-savvy â€œAyatollaâ€ of that hero-worshiping religion. And yet he expects the Luo common and average-educated folks to stop following in the example that he set with Aristotelian virtuous excellence?

How long did it take him to realize that Raila’s 38-40 tribe coalition that spans 6 provinces was indeed a Caliphate? He only came to this realization after being fired from some very high paying job group, which had essentially placed him within the inner sanctums of power and princely comfort. Miguna, who was Raila’s highly salaried “rabid dog who barked” ferociously at whoever teased his boss, was jealously overprotective of his “cash-cow” master.

Miguna, in continuing to milk his cash- cow through hateful viral writings and books, has demonstrated that he is a buk-thirsty and vindictive dude on a mission to avenge the end of a master-servant relationship, in which he was a too willing and submissive a ritualist. Miguna, from his articles, speeches, and commentaries gave more and received less in that lop-sided relationship, in which he minted millions in salaries out of reach for the common man. If Luos are Railaâ€™s slaves as he insinuates, Miguna was a â€œhouse slaveâ€ who snitched on his fellow slaves.

Miguna, was- courtesy of that bizarre symbiotic relationship- pampered. And while he will never tell us, no-one knows how much more he probably made while an “errand-boy” within the corrupt corridors that are straddled by the Kenyan Power elite. There’s a reason why he continued to make a living and drawing a check, and never resigned even though he stayed there long enough to know that “this whole relationship had elements that should have gone against his convictions”.

Eventually, the smarter Machiavellian prince hit first and suddenly the slow moving Miguna, after being “well fattened” by his master, came hurtling down, and hit the ground zero- with a thud! He was caught off guard, because he was too pampered and comfortable to see the “storm coming”. The â€œKhalifaâ€ of “The Caliphate” obeyed the rules of power, and struck at the time of his own choosing! Miguna The Luo Supremacist turned Luo-basher to date continues to moan, mourn, groan and whine, and is yet to emotionally adjust to his new station. What can Miguna do, without the name Raila?

Writer is an Essayist Email: sospeterotieno@gmail.com