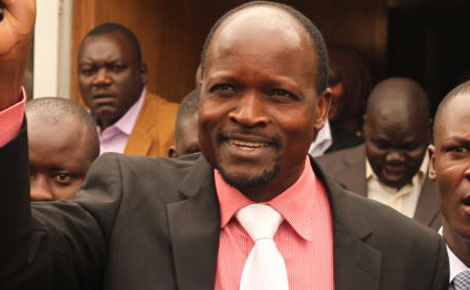 To the people of Kenya, President Kenyatta will forever remain august in their memory. He will go down in history as one of the most adorable and respected Presidents to have ever led them. Presidency, we are told, is the strongest institution in any government. Our own presidency has continued to make history in the positive despite shortcomings.

Just recently, President Kenyatta proved the pundits wrong during his Nyanza tour where hired goons hurled shoes and chairs at him. Those who expected the Commander In Chief to react by dehumanizing people need to re-examine their illusion. The President has, through his meekness and tolerance, confirmed that he is not only a true nationalist, but also a statesman that transcends tribe and religion.

My ancestors in Gusii Land once opined that â€œCharacter is like pregnancy, you cannot hide it,â€ following the Migori incident, our own Presidentâ€™s character was vindicated and pundits sent back to the drawing board. Mesmerizingly and most significantly, he extended the presidential pardon to the claque that had been apprehended for attacking him. What a thoughtful man to have as President.

During the Migori incident, President Kenyattaâ€™s tolerance towards his attackers was a sign of humility. Through his silence and calmness, the President broke the crab fingers of evil master-minders. He virtually expelled the spirit of domination and oppression. He defied the malevolence formed against his wisdom and integrity. He said no to civilian harassment dehumanization. He reassured the validity of the inalienable right to freedom of speech as enshrined in the constitution.

During the Migori shoe throwing incident, President Kenyattaâ€™s superlativeness reassured the Kenyan voters that the standard they raised during the March 4th elections was rightly in place. The sophisticated people of Kenya have confirmed to the world that they voted for the peopleâ€™s President. They have confirmedly demonstrated to the world that their president did not ascend to power by fraud, but, by their valid votes.

Undoubtedly, President Kenyatta today represents the new face of true democracy in Kenya. A leader, I am informed, is the man who leads at the battlefront and not the one who gives excuses on why he cannot visit troubled parts of his domain. After displaying a rich pedigree of humility with royal courage, the Migori incident gave Kenyatta a new national look. The President and his administration were wise enough to be beguiled by the negative forces of destruction.

Albert Einstein was not wrong when he opined that Great spirits always encounter violent opposition from mediocre minds. Nonetheless, unlike his critics who know no history, our President has proved to be an excellent candidate of history. He has shown the way and other leaders across the world must follow his sterling example to make their leadership count.

His avoidance to satisfy the intentions of Migori evil planners must be lauded by all Kenyans irrespective of their political differences. The President must be commended for his superlative courage and doggedness to preserve and promote democracy through freedom of expression in the country.

Without fear of any gainsaying, the head of state must be lauded for refusing to run out of Migori in the face of the fiercest intimidation and political terrorism orchestrated against him. Unlike some known political imposters, the left handed son of Mzee Jommo proved that he is a true stalwart sponsor of democracy. He indeed proved beyond any reasonable doubt that he is the real son of his father. In response to the Migori attack, the Presidentâ€™s dutiful action is no doubt commitment personified and worthy of emulation by world leaders and Africans in particular.

It is now evident that after the Migori attack on the President and his entourage, his leadership style has been vindicated. After defying all odds by successfully challenging the notion that â€œthe best way of defense is attack,â€ Kenyatta has now confirmed that the spirit of former American pastor, activist, humanitarian, and leader in the African-American Civil Rights Movement Martin Luther King, Jr., lives in him. Kenyaâ€™s President is unarguably the most envied leader in the world. Through humility and patience, the President has readily confirmed that whenever the battle is too hard to handle, the victory is always so sweet.

The Presidentâ€™s act of humility and tolerance in Migori will forever remain a potent signal to countries that know no peace due to despotism. The daredevil apparatchiks that planned evil against the Commander In Chief at the behest of their benefactors have no option but to take their evil antics back to the drawing board and plan for another failure. His leadership has endeared him to Kenyans from all walks of life.

President Kenyattaâ€™s way of doing things has upturned the lies that people propagated against him. Unlike those leaders who prefer to develop their â€œstomach infrastructureâ€ to development and innovative leadership, he has demonstrated that he has the peopleâ€™s interest at heart. He has demonstrated his unflagging commitment to a â€œnation that achieves its full promise and potentialâ€ and resoluteness to surmount every obstacle.

The violence against the head of State is a clear warning that he must not go to sleep. Democracy in Kenya must truly be the government of the people, by the people and for the people and never a government of the mighty, by the mighty, by the mighty and for the mighty. Kenyans must not tolerate shenanigans in their democratically elected President. The Migori incident was the litmus paper for the president and he successfully wrote his name in the positive side of history.

Kenyans must seize this moment and say â€œnever againâ€ to the brutal subversion of the genuine wishes and aspiration of the people for true democracy in our country. If not, we the people will have ourselves to blame. This is our chance, let the Presidentâ€™s example be our guiding light as he leads us to the Promised Land. Kenyans are more than ever before determined to vote out corrupt, evil leaders, insecurity, unemployment, poverty and continuous looting of our national resources.