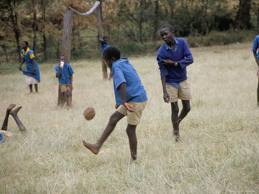 My mom was an open Christian and on regular Sundays we usually went to a nearby church. It was quite petrifying for me at first for I wasn’t used to seeing worshipers behave in such a manner.

After the praise and worship, all prayers started with a loud â€œShanta lababaâ€ from the pastor and mayhem of loud noises from the congregation begun. I would say the Lordâ€™s Prayer seven times as I observed the drama unfold before a loud ‘Amen'(The only word in the entire prayer that I understood) was said.

My grandmother was one of the few regular relatives who would visit us in Meru at that time. When she was around, we could only go to one church Anglican, where she was always happy to deliver greetings from her local Mukwereini Parrish church during the ushuhuda session.

I couldn’t wait to get back home after church those days. All the neighborhood kids were always out to play. â€œCrackie no payeeâ€ was the code of the game. Every boy those days carried two or three round glass marbles to readily join the â€œbanoâ€ game anywhere they found it being played. It was quite a tactical game at the time and one would consider which marble to use depending on whom you played with.

Salim whose father was a business tycoon was quite good at it but Otieno, a.k.a Mpararo was the ‘otero’ (star) those days. His mom owned a new generation salon at the time and ladies who had been used to the â€œmikebe na makaaâ€ salons would come in large numbers to enjoy the new style of hair maintenance.

Gitobu whose father was a successful â€œmiraaâ€ business man would on occasion join us and so did other two Samburu boys. We usually called them ‘ero!‘ since no one was able to correctly pronounce their names. Though we came home dusty our parents never used to mind a lot.

The only game that used to dread our parents those days was one which we had inherited from our fathers.

â€œMtelezoâ€ (sliding on mad). Every kid in our area used to be warned especially during the rainy season not to dare. The warnings fell on deaf ears especially when the samburu friends of ours brought some cow dung that we would smear on the roadside to enhance the experience. It was an event that even Pipi,an Indian kid in the area couldn’t afford to miss.

â€œMtelezoâ€ needed some courage to participate and Gitobu was always the morale booster. He would shout the, ‘no retreat no surrender’ slogan as he took the first skid. We all followed suit as we chanted ‘Rambo, Commando, Chuck Norris and Bruce lee. (Names of the Hollywood stars that inspired us, after watching their action movies in vibandas those days- vedio rooms).

No one went home clean and the punishments waited. One could hear as Salim’s mom shouted at the top of her Swahili voice revealing the level of mud and cow dung Salim had brought home. ‘Heee!!!!, Olololo Maye!!! Otieno!!!’.That was the other occasional voice one heard from the other side of the fence.

As you can see, from Gitobu, Otieno, Salim, and so on, it didn’t matter where and whom we played with. That is why it didnâ€™t matter to us whether Gitobu was a Meru. We viewed him as the morale booster and the most courageous.

Religion, race and tribe were never factors those days. My playmates were diverse, and at no time did I judge them by their tribes, but like Martin Luther, looked at them by the content of their character.

We as Kenyans, like the children I played with as a child,Â  need to focus more on something that brings us together, and not what separates us.

As a nation which was colonized, and endeavors to attain democratic freedoms and ideals within its social structure, we all share a common past.

Come 2013, we all share a common responsibility to elect leaders that will guarantee all of us a prosperous Kenya where the national cake is distributed equitably.

I envisage a nation where religion, race and tribe are just but colorful flowers in one unified vase.

Kuria Sam is a Kenyan born American who lives in Seattle, Washington