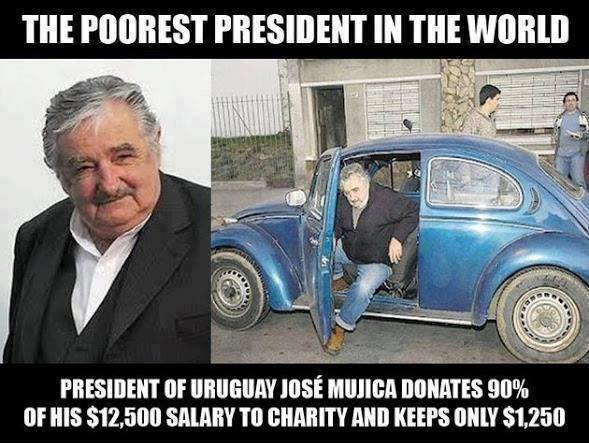 As you Celebrate Your New Year, Meet The “POOREST PRESIDENT” In The World â€“ Uruguayan President Drives A Volkswagen Beetle & Donates 90% Of His Salary To Charity
By Albert Nyakundi Amenya â€“ Banana Pedlar

While Nigeria president Goodluck Jonathan is ranked the most foolish president in the world, the President of Uruguay Jose Mujica as earned a position in history as poorest president in the world. Our Kenyan leaders have been scolded for refusing to declare their wealth publicly and demanding for astronomical pay rise on top of their already exorbitant allowances.

Meanwhile, the Uruguayan president has earned a worldwide recognition and respect for donating 90 percent of his salary to charitable causes. I have a premonition that if he was the president of Kenya, they could call him â€œMjingaâ€ â€“ a foolish man â€“ instead of his Surname Mujica.

He has earned what most people would call an enviable reputation as the â€œpoorest,â€ or the â€œmost generous,â€ president in the world. His nickname, â€œel presidente mas pobreâ€ translates to â€œpoorest presidentâ€.

When asked, the 77 year-old who has been Uruguayâ€™s president since March 1, 2010 says â€œI do fine with that amount; I have to do fine because there are many Uruguayans who live with much less.â€ Honestly, Why canâ€™t Uhuru Kenyatta emulate this wise man?

It is also reported that under his stewardship, Uruguay has become known for low levels of corruption. The South American country ranks as the second least corrupt country in Latin America in Transparency Internationalâ€™s global corruption index.

According to reliable sources, the President has no bank accounts, no debts, and he enjoys the companionship of his dog, Manuela. When his term is over, the President hopes to rest even more peacefully in his farmhouse, along with his wife and his inseparable dog.
There is something about leading by example. When you do, it becomes easier for other people to follow. But, my question is, will our Kenyan leaders emulate this noble man?