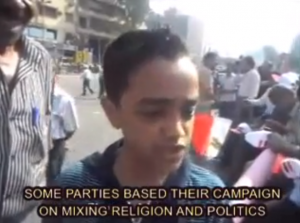 This 12 years old boy is just stunningly, incredibly smart. Listen to him as he excruciates the crisis in Egypt, not so different with our own politics of tyranny of numbers!

This young Egyptian boy, reportedly 12 at the time, was actually interviewed in Cairo by the newspaper El Wady way back in October. That was a few months into President Mohamed Morsiâ€™s controversial rule, before he had granted himself near-unlimited powers but after several other worrying steps toward consolidating power among Islamist allies.

The video circulated widely on Saturday â€“ far more widely, it appears, than it did in October â€“ as much of the world turns its attention to Egypt and the protest movement that culminated in July 3â€²s military coup ousting Morsi from power. The young boy, currently a star on the link-sharing site Reddit, articulates the opposition movementâ€™s gripes and complaints with surprising sophistication and a remarkably clear-headed passion. At some point, maybe when he explains the contradictions between a constitution meant to enshrine the rights of women and a parliament that had carved out broad exceptions for conservative interpretations of Islamic law, the young Egyptian takes a leap from precocious to downright impressive.

This two-and-a-half-minute video couldnâ€™t capture all of the complexities of Egyptâ€™s multifaceted protest movement, of course, much less the broader political, economic and social crisis of which that movement is a part. But for newcomers eager to understand the protests, this video is a concise introduction to one segment of the protesters, delivered by a delightfully passionate and improbably well-spoken boy who appears to grasp nuances that are way, way beyond his reading level.